Home»Reviews»A Decade On: No Country for Old Men [2007]
Reviews 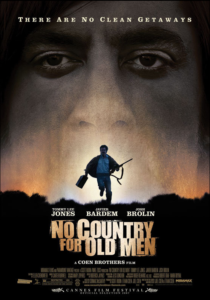 The filmography of the Coen brothers is reasonably vast at this point, as their dry tar-black humour has been implemented into crime-thrillers, screwball comedy, stoner comedy, neo noir, Western, period piece, and a film about filmmaking. It seemed like they’d done it all even by the time they got to this Cormac McCarthy adaptation, which would be another crime-drama-thriller for the duo, and what looked like a mix of their dark sensibilities from their debut Blood Simple and the examination of fate and evil in arguably their best film (at the time) Fargo.

Despite the familiar territory (in terms of both genre and subject matter), what the Coens did differently was to distil this crime story down to its essence to illuminate this struggle of evil and good, rather than layer the film with idiosyncrasies and quirks – not that they were ever a problem of the Coens’, and not that this film is without some deathly amusing humour, but in stark contrast to their lavish and energetic works like Raising Arizona, No Country for Old Men is the Coens working at their most minimalistic, their most stylistically restrained, and arguably their most intensely atmospheric – and surprisingly, it turned out to be one of their most memorable hits.

2007 wasn’t exactly one of the darker years in recent human history, but there was still a looming sense of dread (mostly felt in the housing economy world). This was reflected in the movies, where even blockbusters like The Bourne Ultimatum were more worrisomely questioning rather than mere life-affirming escapism. No Country for Old Men summed up that dread, with the bleak humour making it easier to go down.

The Coens took this contemporary mood and applied it to the already dour McCarthy tale of a normal man, Llewelyn Moss, caught in a whirlwind of trouble when he takes a suitcase of money from a violently botched drug deal, which leads to him being hunted down by the grueling hit-man, Chigurh, an absolute machine who lets no-one stand in his way in finding the money, who is surely one of the best representations of evil to grace the silver screen.

Boosted by the incredible performances (of not just the leads, but the array of supporting players), it’s the atmospheric moments of tension that pull us into the film: Moss scoping the botched drug deal, cleverly hiding the money in the hotel as Chigurh hunts him down, the shoot-out between the two just after Moss finds the tracker – these scenes are perfectly crafted to be as thrilling as possible, and without overbearing music that most thrillers opt for, also shows how so little can have so much of an effect.

Although my initial cinema viewing of this masterpiece lead to a number of rewatches that diminished the quality and had me thinking it was just a little too grumpily on-the-nose and a little tonally misguided, my most recent rewatch, nearly ten years after the first, had me enjoying it as the thrilling, snow-cold, baron masterwork that it is. Perhaps the film’s dryness left me a little parched on the rewatches, but I now see the film with similar eyes to when I first saw it, especially seeing it for the immensely tense thriller it is, though I probably relish more in the nihilistic understanding the film reaches for and a little less in the morbidly laugh-out-loud humour.

Even though there may be other films in this A Decade On series that deserved the top gongs at the Oscars more, awarding No Country for Old Men Best Picture, Best Director(s), and Best Adapted Screenplay is still one of the best decisions the Academy has made, which just proves how good of a year 2007 was. In contrast to many flowery, overdone, overly-eager Best Picture winners that came before and after it, it’s unusual that such a gripping, yet ascetic thriller, with subdued performances, minimalistically crafted dialogue, and basically no music ended up lauded over at awards-season time – just goes to show the world of movies had its head just about screwed on right in this year.

As a tremendous and ponderous study on the unexplainable nature of the forces of the world, as well as a highly gripping and perfected crafted  thriller experience, No Country for Old Men has been praised as one of the best films of this millennium and rightfully so. I’ll finish up on my praise for this stunning must-watch film of 2007 with one of my favourite pieces of movie trivia, which may be referencing another 2007 film in this A Decade On series.

While on location in Marfa, Texas, There Will Be Blood was shooting nearby. One day, while filming a wide shot of the landscape for No Country for Old Men, Joel Coen and Ethan Coen had to halt shooting for the day when a gigantic cloud of dark smoke floated conspicuously into view. Paul Thomas Anderson was testing the pyrotechnics of an oil derrick set ablaze on the set of his film. The Coens resumed filming the next day, when the smoke finally dissipated. A year and a half later, both films were the leading contenders at the Academy Awards.

Thelma [2017] – A Striking Tale of Self-Discovery with Spellbinding Imagery