More than mimicking Tonya Harding’s mannerisms, Margot Robbie wholly embodies her characters’ temperament. Be it smiling on her entry into the rink or wiping off tears with a cigarette in hand, after recollecting the past with tinge of nostalgia, Robbie’s performance is absolutely mesmerizing.

In January 1994, Nancy Kerrigan, the darling of figure skating, was kneecapped during practice before the U.S. Women’s Championships in Detroit. The crime carried out by a goofball hit-men was found to be orchestrated by Jeff Gillooly, ex-husband of Kerrigan’s rival Olympic competitor Tonya Harding. Although Tonya denied any knowledge of Jeff’s plan, there was wide speculation that she potentially played a part (she denied it then and now). By then the 23-year-old Tonya became the laughing stock and most hated person among the US households. The firestorm of media reports combined with Tonya’s position at the lower rungs of class ladder allegedly devoured her public personality.

Craig Gillespie’s I, Tonya (2017) broods over the tragedies that shaped the life of infamous figure skater. From the days she was known as the non-compliant ‘Tomboy’ who failed to fit into the shoes of idealized version of American woman to the days she was publicized as ‘trailer trash anti-heroine’, the film tries to peel the layers off the mainstream construction or popular opinion. The good thing about it is that Gillespie doesn’t pretend to have all the answers or preoccupied with setting the record straight, regarding the ‘clubbing incident’. The details still remain hazy. Furthermore, ‘I, Tonya’ doesn’t focus on the alleged feud between Harding and Kerrigan. Blending the satirical, caustic, and cynical tone of Coen Brothers & Martin Scorsese, Gillespie’s movie rather ponders at the naïve public opinion that’s warped by tabloid vultures; it observes how the general populace becomes so obsessed with this simple narrative or ‘prettied-up’ version of national values oft reduce some flawed person into a mere punchline. 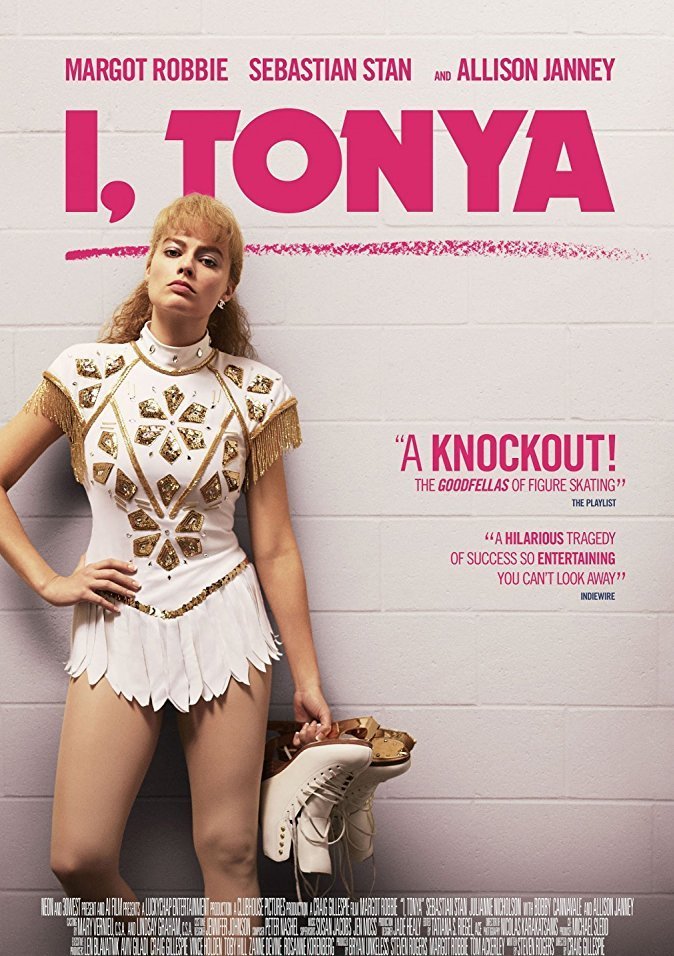 I, Tonya mostly eschews the traditional biopic approach. It opens in present day with the middle-aged, acutely self-aware Tonya Harding (Margot Robbie) providing interviews for a documentary. This faux-documentary approach that chronicles the skater’s life and lead-up to the ‘incident’ is also covered through the perspectives of Tonya’s acid-tongued mother LaVona Golden (a wickedly entertaining turn from Allison Janney) and ex-husband Jeff Gillooly (Sebastian Stan). The faux-documentary setting is designed after ESPN’s 30 for 30 episode “The Price of Gold” (in 2014). For years, Tonya was heavily scrutinized by the camera’s gaze. Now is her chance to look into the same device to reinstate some dignity, by reflecting on the difficult truths that’s hidden beyond her crime and obvious flaws. Screenwriter/producer Steven Rogers, who previously wrote scripts for rom-coms, pursued this subject for a spec script. He says that the perspectives of Harding and Gillooly wildly differed, which propelled him to write the dramatized interview scenes to address the conflicted version of events. Rogers initially races through Tonya’s early life, crisply expressing her skating prodigy status and the relentless pattern of parental abuse.

Thanks to MacKenna Grace’s (young Tonya) pitch-perfect sullen looks and Allison Janey’s domineering presence, enough insight is provided upon the central subject’s harsh upbringing, vulnerability, and her unparalleled ‘on-ice’ talent. Despite growing up in hardscrabble circumstances in Portland, Oregon, teenager Tonya (Robbie) was all set to burst into the late 1980s American figure-skating scene. Considering the bitterness, explosion of violence, and absence of love in Tonya’s life, Jeff Gillooly’s alluring posture and hangdog mustache might have instilled upon her a sense of security and love. But it didn’t fare much better. A montage sequence cuts between Tonya’s sexual encounters with Jeff and later getting beaten up by him. This reflects her lamentable line of thought, “I figured my mom hit me, she loves me. It was what I knew.” She is confused over where love ends and abuse begins.

Employing fourth-wall smashing multiple narrations, freeze-frames, and pop-culture references, Gillespie’s ‘Goodfellas-mode’ deftly taps into the twisted psychology behind the domestic abuse. Nevertheless, on the rink, the beauty of her skating almost transcends the ugly, awkward violence. But in the sports arena too, due to few apathetic conservative judges, Tonya faces barbed insults (despite repeatedly proving her athletic abilities). Her homemade gowns and her preference for pop music for the skating routines are considered to be less graceful. “You’re representing our country, for f**k’s sake. They need to see a wholesome American family”, one judge snaps at her. Gradually, Harding’s competitive force, shaky relationship with her husband, and painful self-awareness regarding judges’ gaze, propels her to make a very wrong decision. From then on things soon teeter out of her control, and she becomes the fodder for insensitive tabloids.

Except for Lars and the Real Girl (2007), Australian director Gillespie’s oeuvre is defined by conventional genre movies (Million Dollar Arm, Fright Night, Mr. Woodcock). In fact, both Gillespie and writer Steven Rogers offer their very best to shape Tonya’s complex portrait. The director mostly does well in balancing the tricky tonal changes. He skillfully underlines Harding’s victimization and the general hypocrisy surrounding the ‘Kerrigan incident’. Of course, there are certain shiftiness and flaws in Gillespie-Rogers’ perspective. As I mentioned, the film-maker doesn’t provide a very definitive version of the ‘Kerrigan incident’. But in some obscure way, the film affirms to Tonya’s insistence that she didn’t know Jeff’s violent scheme. It’s obviously necessary to do that, or else it would clearly thwart the clear-eyed depiction of Tonya as victim of bad company and abusive surroundings. The shadow of doubt over Harding’s involvement works to her favor in the narrative. The other unsavory aspect is the consistent needle-drops, which after a time turns irritable and remains a bit on-the-nose. Tonya’s engineered downfall in the Kerrigan incident aftermath clearly provides the sharp social commentary, but there’s attempt to generate more pathos (or more gut-punches) by making Harding addressing the camera and call the viewers her abusers. 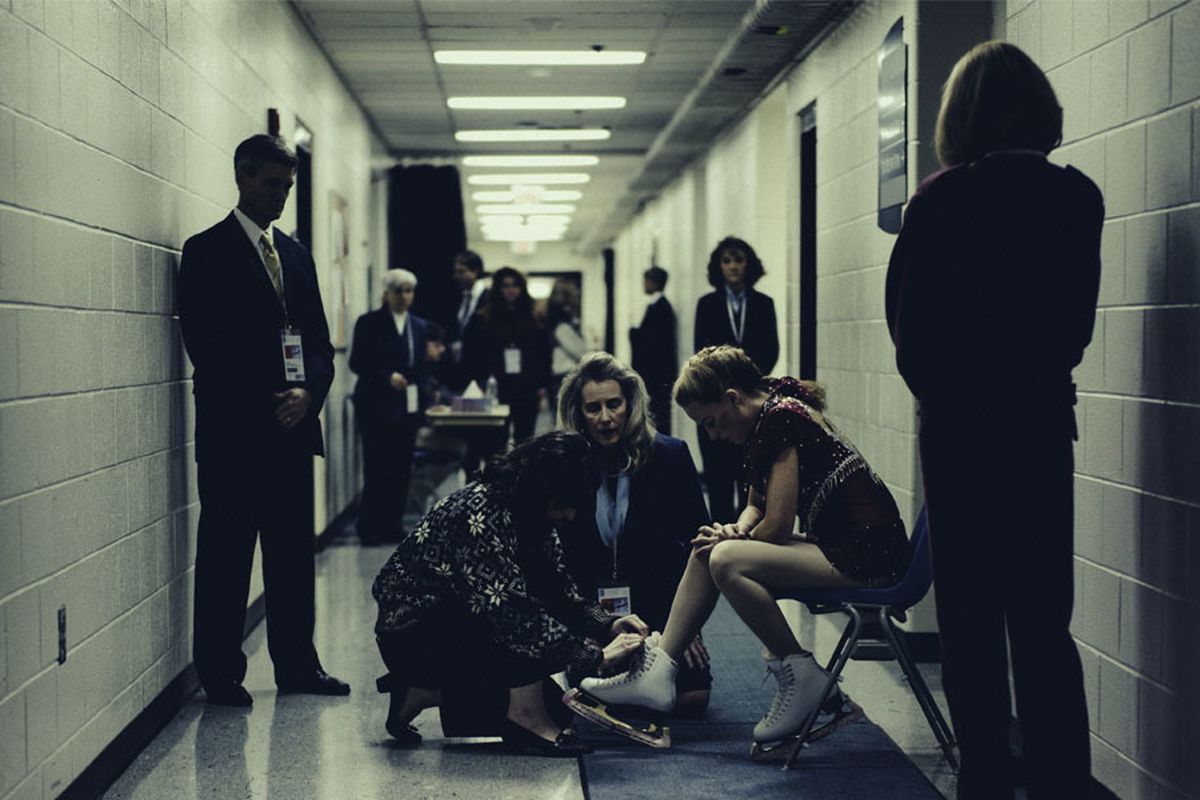 Apart from such handful of flippant episodes, Gillespie-Rogers duo instills subtle poignance to the proceedings, especially in all the scenes that’s set in and around the rink. Most of the biopic (on famous or infamous personalities) cinema, focuses more on the person’s place in the immediate social atmosphere that it undercuts their unbridled passion or inner fire (it was a flaw that marks the depiction of Billie Jean King in ‘Battle of the Sexes’). While delivering the searing indictment on public hypocrisy and delineating cyclical abuse thrust upon Tonya, director Gillespie doesn’t forget to capture the elation, passion, and peacefulness that emanates from Tonya Harding when she is on the ice. Employing Steadicam, Robbie’s rigorous skating training, professional doubles, and other digital assistance, the director treats the protagonist’s passion with a perfect sense of wonder and enthusiasm. And, these pleasurable occasions on the rink firmly brings out a rawer, elegiac tone when Tonya’s off-field abuses flourish (the final juxtaposition between Tonya’s marvelous triple axle and bloody fall inside the boxing ring imprints an indelible and lamentable image).

Margot Robbie’s performance clearly exceeds our expectations (even though despite the deglamorization, she doesn’t look much like the person she’s playing). More than mimicking Tonya’s mannerisms, Robbie wholly embodies her characters’ temperament. Be it smiling on her entry into the rink or wiping off tears with a cigarette in hand, after recollecting the past with tinge of nostalgia, Robbie’s performance is absolutely mesmerizing. She has ably stepped out of the ‘bombshell’ label (hurled upon her after the break-out role in ‘The Wolf of Wall Street’) to get to the person buried beneath the indifferent punchlines. One of the most powerfully acted scenes in the movie is when Tonya sits alone in front of a mirror and attempts to be ‘pretty’ before going out on the rink. Robbie’s performance in this scene poignantly chronicles the protagonist’s character nature: she applies too much blush, smiles too wide to make it little ‘ghoulish’, and also silently cries during this whole routine; it shows how she strives to be loved or liked a little more, whereas the reality keeps on playing cruel tricks. In spite of, all the ineradicable flaws one associate with Tonya Harding, such quietly tragic moments truly brings us closer to the person’s battered soul. This is where the success of the film lies: adding notes of dignity and emotional agony missing from every headline stories or cruel, off-handed remarks.

I, Tonya (119 minutes) is much more than by-the-numbers biopic on the disgraced and infamous figure-skater. It’s a film about persistent domestic violence and the pervasive power of headline markers and the ensuing public overreaction. The A-list actors and Gillespie’s balanced direction overcomes the narrative’s certain glib notions.