Home»Reviews»Polytechnique [2009]: A Ponderous Glimpse into the Layers of Misogyny
Reviews 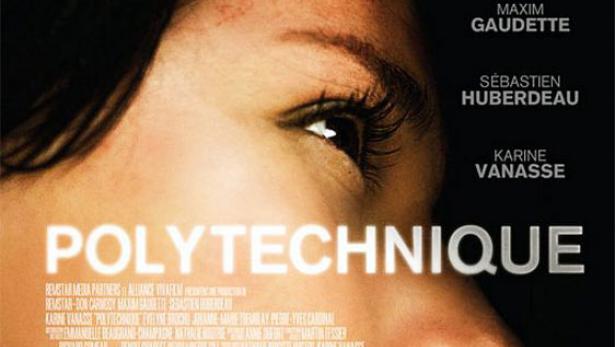 Portraying significant or morbid events of contemporary history on-screen brings onset of challenges for a film-maker. Can he/she go beyond the buzz created by those particular events and explore few difficult notions? Can the artistic venture bring something new to screen, without compromising the facts? Since people’s emotions run high in events relating to the contemporary history, will the visuals enacted by actors be seen as a way of exploiting tragedy? With the copious amount of scholarly and journalistic works, American cinema is often able to see through its own (fiercely manipulative?) historical lens, and state: ‘this is how things transpired’. Canadian film-maker Dennis Villeneuve’s “Polytechnique” (2009), with minimal speculation and enormous restraint portrays such an incident that created shocking ripples in the contemporary Canadian society: the Ecole Polytechnique shooting massacre.

On 6th December 1989, Mark Lepine walked into Montreal’s Polytechnique School, targeted and claimed the lives of 14 women. Ten other female students (and also four male students) were seriously injured. He purposefully targeted women (calling them ‘feminists’ in the note he left) who had cost him the opportunities in life, like not being able to get an admission into the school. Director Villeneuve, known for concocting narratives centered on women, struggling against power and with their place in society, sets out to offer a perspective on this misogynistic crime, which could be addressed as ‘austere dramatization’. The film starts from killer Marc Lepine’s perspective (the name is not mentioned and even in the end credits, Maxim Gaudette, who played the character is referred to ‘The Killer’), who in a narrative voice-over talks about his hatred of women (“Feminists have ruined my life” he writes in his letter). Villeneuve imbues the sense of internal tension and hints at the absence of outlet for the loner to let out his rage, but he keeps up an distanced observational stance, offering no extended character-arc.

While writing the suicide letter, claiming feminism as his archenemy, the depressed individual gazes out his apartment and spies on a woman in the opposite flat. However, Villeneuve’s camera isn’t gazing with the man at the woman to hint at perversity; the frame rather focuses on ‘killer’s’ face to contemplate on this modern individual’s absolute alienation from women. With that simple observation, the story jumps on to a parallel narrative involving, Valerie (Karine Vanasse) and her roommate/friend Stephanie (Evelyn Brochu). Valerie fixes her attire and gets for a big day – interview for aeronautics internship. Her engineering ambitions are hardly recognized by the men dominating in the field and even her interviewer states “we’re looking for candidates, who won’t quit….” Valerie eventually gets it, but only after saying that her career comes first; not raising a family. The final parallel narrative involves that of empathetic student Jean-Francois (Sebastien Huberdeau), who personifies the male students, rendered helpless when facing a loaded gun. Those men who ran away from the building were judged as ‘cowards’ for not undoing the killer’s damage.

“Polytechnique” is a hard film to watch because Villeneuve (and co-writer Jacques Davidts), not only makes us to sit through an atmosphere, drenched with dread and grief, but also employs his profound artistry to coerce the viewer to patiently contemplate on the unspoken things in the narrative. Often the director infuses moments of dislocation, devoid of sound, to offer subtle commentary. In one such moment, Jean-Francois in a daze, runs through corridors to help, escaping from killer’s shooting range. But, still he remains powerless and confused to stop the harm from being done. While dodging the shooter, he suddenly enters into a room full of partying, doped up students, oblivious of the chaos outside. The sudden displacement faced by Jean-Francois at that moment is immediately cut to a period after the shooting, where Jean is evidently distressed. Villeneuve, through these simple shots and cuts, subtly hints at the characters post-traumatic stress and how those moments of uncertainty and dislocation, felt during shootout, would forever accompany him. Through the perspective of Jean-Francois, Villeneuve is also trying to comment that it would be wrong to take the ‘Ecole Polytechnique’ massacre as female against man struggle. Like Valerie or other female survivors of the massacre, Francois too is emotionally fractured by the meaningless violence. While Francois is represented for the collective guilt of survived men, for Valerie, her determination is brought to the fore, since she feels that by living she could honor her dead schoolmates.

The black-and-white cinematography faithfully recreates the cataclysmic events without using any stylistic flourishes. Villeneuve also doubles back on certain events to create an unsettling effect. The intermingling blood, the unbearably serene images of the country side, the powerful close-ups and the fluid camera movements and the evocation of unspoken thoughts are all robust elements of Villeneuve’s directorial sense (with “Incendies” in 2010, he cemented his reputation as a fine film artist). In fact, the impact of violence of humans became a vital element of Villeneuve’s subjective imagery, up to “Sicario”. Apart from the lingering shooting sequences, the most unnerving shot of the film should be the final image as the camera is upside down, traversing across the ceiling. It is a excellent shot that fades to black, which demands us to contemplate on the violent disruption we witnessed on-screen (as well as on the horrific real event). The performances from three central characters are exceptional, especially Huberdeau, whose distressed eyes convey the trauma than mere spoken words.

Before the act of killings in “Polytechnique”, the killer leaves a note at mailbox with the words ‘inevitable’. Such ruthless inevitability and the resulting tragedy are what gives us an inextricable and perturbing movie experience.

'Tamasha' and the Problem of living your Dreams

Our Little Sister [2015] Review: A Marvelous Addition to Kore-eda’s Brand of Humanist Cinema