The Fabelmans (2022) Review: It’s New Jersey in 1952. The lights have gone down in a packed theater as six-year-old Sammy Fabelman (Mateo Zoryon Francis-DeFord, soon to be played by Gabriel LaBelle in his teenage years) gapes in wonderment and horror at the grandest of moving pictures his parents, Mitzi (Michelle Williams) and Burt (Paul Dano), have taken him to see. The film in question is Cecil B. DeMille’s The Greatest Show on Earth, and it’s one of the few absolute truisms of The Fabelmans, a largely idealized yet stunningly realized portrayal of the traumatic and formative childhood experiences that would shape a young boy with a handheld camera into the cinematic legend known as Steven Spielberg.

What a fateful occasion it was that this film, of all films, would be the one to send the director and his fictional conduit down a career path from which there was no looking back. Not just because Spielberg would one day be robbed of Oscar glory by a film that, like DeMille’s, has earned a sordid reputation as one of the worst Best Picture winners of all time. But rather because, when packaged into its all-encompassing, 34-piece whole, Spielberg’s filmography has been nothing short of “The Greatest Show on Earth.” 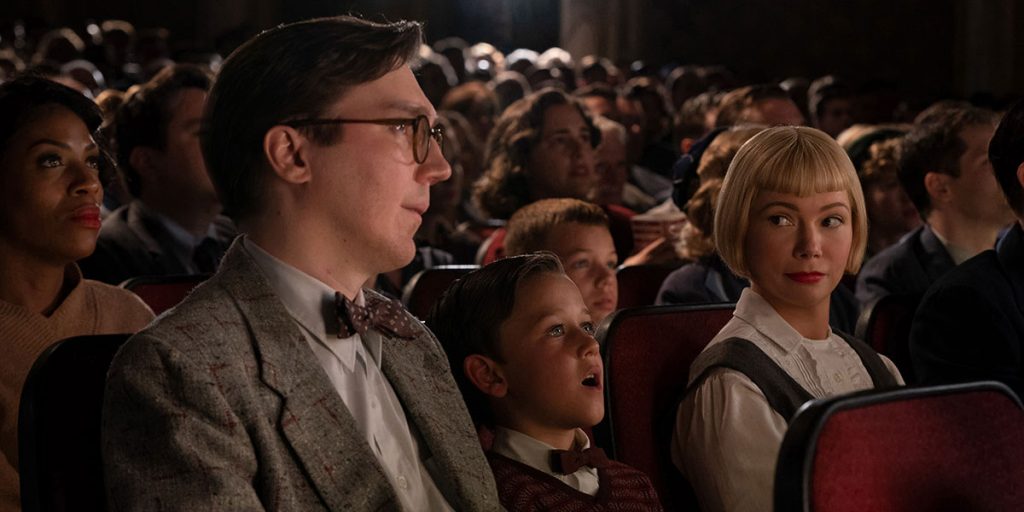 The Fabelmans tells Spielberg’s story before that show truly began with his third feature, the game-changing Jaws. The horror of this particular story is not a voracious great white shark but instead, the heart-wrenching tumult of a young man flustered and betrayed by the series of discoveries that would culminate in his parent’s divorce. Spielbergian devotees, of course, understand the shattering impact such a personal and definitive memory has had on the stories he’s told. Their separation has found its way into the likes of sci-fi favorites Close Encounters of the Third Kind and E.T. the Extra-Terrestrial, and even the suave stylishness of Spielberg’s ultra-cool caper Catch Me If You Can.

If Spielberg has spent the greater part of his life attempting to understand his parents and the unconventional approach they took to raising him and his three sisters, then he’s finally arrived, his latest film in tow, at a place where he can accept them. In doing so, he’s crafted the kind of film that, even though he has no intention of slowing down, provides the most purposeful and touching bookend to his iconic career. That is, whenever The Fabelmans isn’t spending the majority of its hefty runtime making us wish he would live forever if only to continue making films on as grand a scale as he’s done for almost five decades.

Even if it has arrived to forge its forever home in the latter part of Spielberg’s catalog, The Fabelmans has done so on the heels of recent attempts by other directors to make sense of where they came from. However, what the film inherently and immediately grasps, unlike several others that have followed this trend, is that a place is only as memorable as the people inhabiting it. Just as the Spielbergs never stayed in one place for terribly long, so, too, do the Fabelmans uproot themselves from New Jersey to Arizona and, eventually, to Northern California. Likewise, Spielberg, who co-wrote The Fabelmans with Tony Kushner, never forces the film to veer too hard in any which way, whether it’s an ode to the transformative process of filmgoing and filmmaking, a complex drama about a family on the brink of collapse, or a pure coming-of-age tale. With gentle touches from both geniuses, the film comprises the best of all three in a hugely entertaining story of staggering universality. It’s a film in which a lack of exposure to Spielberg’s history, as told by his movies, isn’t necessary to enjoy it for what it is, in spite of all the little nods to said movies he hides within this fictional world. And, in many ways, it boils down to the duo’s willingness to leave their words in the hands of some truly winning performances.

The unbearable sense of heartache that inevitably follows in even the most peaceful of divorces is matched in the one portrayed by Spielberg, especially when Burt and Mitzi finally gather the courage, to be honest with themselves and each other before breaking the news to their devastated kids. But while it undergirds the film’s momentum, it certainly doesn’t define it. It’s clear the director has mustered up enough reverence for his parents in the years since their separation to see only the best in them, as hard as their decision must have been.

Unlike the absentee dads, his real-life counterpart inspired, Paul Dano doesn’t submit to irritation and provocations as Burt. He’s a quiet man of both science and faith who simply can’t hope to grasp the predilection towards the arts his children share so openly with their mother. His quietly melancholic power in the role, which is to say his love for Michelle Williams’ Mitzi, is such that he’d gladly take the fall for his marriage’s shortcomings, regardless of how much they are the direct result of his wife’s own mistakes. He plays the hand of logic while Williams plays the hand of passion in a towering performance that lays bare those very mistakes without making her out to be what a more conventional storyteller might have termed a villain. As a free-spirited pianist who gave up her aspirations in the world of classical music to start a family, Mitzi is also the first to encourage Sammy’s love of film after an exercise in conquering his on-screen fears. Williams unlocks some of her director’s fondest and rawest memories. She’s hard to resist yet, at times, difficult to sympathize with; she walks a very thin line knowing full well that following her desires means extracting the heaviest of tolls from her children.

It makes for a cathartic rendering of Spielberg’s upbringing, one completed by a star-making performance from young Gabriel LaBelle as the teenage Sammy. Therapy isn’t free, however, and Spielberg had to have known that they would need to find an actor who could validate the director’s own desire to leave what he knew behind even as a part of his family would remain with him whether he wanted it to or not. LaBelle does this and then some, ensuring that there’s more than enough childlike humor and magic pervading the film to ensure that it’s not a total downer. He’s an actor with courage beyond his years, practically perfect at conveying how Sammy’s love of filmmaking can hurt him as much as it inspires others. That being said, he’s more than eager to remind us all that he’s still just a kid, what with his awkward nervousness in a hilarious moment when his first girlfriend, Monica (Chloe East), attempts to briefly convert him from Judaism to Christianity in a ploy for a moment alone with him.

It’s moments like this in which the viewer is privy to how little control Spielberg once found himself with, and how he attempted to harness what control he had left over into the films he made with his friends. The Sammy who almost gives into his pain and contemplates walking away from his dream is not the confident Sammy who directs his buddies in a wartime picture as if he’s already won two Directing Oscars. As if his the director’s control behind the camera hadn’t already been guaranteed, cinematographer Janusz Kaminski returns to Spielberg’s aid once more for good measure. Together, they capture Sammy’s directorial and editorial brilliance through dazzling recreations of old home movies, their fingerprints stamped over a story their years-long partnership seemed destined for.

By the time the credits roll to the tune of a delightfully simplistic score from the immortal John Williams, the director has quelled the resentment he once had for his family, wise and graceful enough to understand that they did the best they could, and confident that his unrivaled love for the moving image helped him fill in the gaps necessary for him to return to where it all began. Though it might be stroking his ego a little too hard — not that a filmmaker as humble as he would ever encourage us to — to say that Spielberg loves movies more than he could love anything or anyone else, The Fabelmans makes that notion a bit hard to counter. It’s far too intimate and emphatically uplifting to even try.

Related: Where to Watch & Stream The Fabelmans Online?

The Fabelmans (2022): Release Date, Plot, Cast, Trailer, And Everything We Know