A common criticism often thrown at Steven Spielberg is that although his films display immense talent and incredible craftsmanship, they’re viewed as too sentimental and overly sappy with their emotions. As a teenager trying to rebel against the common film code, I found myself agreeing with the fact that although Spielberg was incredibly talented, I found his films utterly manipulative and extremely sentimental – to say that changed when I first viewed E.T. The Extra-Terrestrial [1982] as a Senior in high school is an understatement: not only was I hit with this overwhelming sense of sadness and joy, I found myself blown away at the fact that, as a young adult, a film meant (mostly, or so it seemed) for children was able to render me into a puddle of nothingness. Gone was the thought that Spielberg was the most overrated American filmmaker, it had been replaced with complete admiration for his craft. All because of a puppet.

Flash forward to now, five-years since my last viewing of E.T. The Extra-Terrestrial (when I had first seen the film, I found myself repeatedly re-watching it over the span of two weeks: I’d seen it probably five or six times in that two weeks) and I am, once again, left feeling an incredible sense of emotional pain but beyond that pain, there lies a sense of importance with the film that I hadn’t picked up on until now: it was perhaps Spielberg’s most personal film and the perfect film when studying his work. Within a two-hour span, we see Spielberg reveal a side of him that we’ve rarely ever seen: a sense of vulnerability, a feeling that is so hard to convey and understand for all people and through the cinematic artform, Spielberg is allowing us to peer into his film and feel for his characters, but also is revealing so much about himself and his upbringing.

A recurring theme in Spielberg’s filmography, in all shapes and sizes, is the idea of abandonment and loneliness. Even the films one may not initially see as being about abandonment (something like Saving Private Ryan or War of the Worlds or even his recent(ish) The Post ) are rooted in elements of abandonment and see Spielberg, through different stages in his life, tackle the theme head-on. It is a personal theme for Spielberg: his parents divorced when he was a child, causing his father to become a less frequent presence in his life and his younger sisters. For them, he adopted a more paternal role since their actual father wasn’t there to be one. For Spielberg himself, he coped through his imagination: he created an imaginary friend, an alien who could be both a big brother and a present father: both things he never had in his life. And here is where E.T. the Extra-Terrestrial comes in as Spielberg’s most personal film.

Whereas the previous Spielberg Science-Fiction film, Close Encounters of the Third Kind, is exploring the abandonment through the eyes of the parent in question, E.T. The Extra-terrestrial is a film tackling the void left by said parent through the eyes of the children he left behind. There’s a really emotional scene early on in E.T: Elliott, who has just seen E.T. for the first time, races to tell his family about it and his mother and older brother and younger sister all believe he’s overreacting. He mentions that “Dad would believe him” and after a moment, his mother tells him to call him up. Elliott replies that he’s in Mexico with his girlfriend, indicating that this separation is not only incredibly recent, but extremely sore on the Thompson family: Mary, Elliott’s mother, sobs out of the room, Michael, his older brother, screams at Elliott for being inconsiderate, and Gertie, the baby sister, sits not fully understanding what’s going on – she utters a “Where’s Mexico?” if only to be heard in the chaotic mess of emotion – leaving Elliott to feel separated from his family even more than he initially felt: he has no one who can understand him. 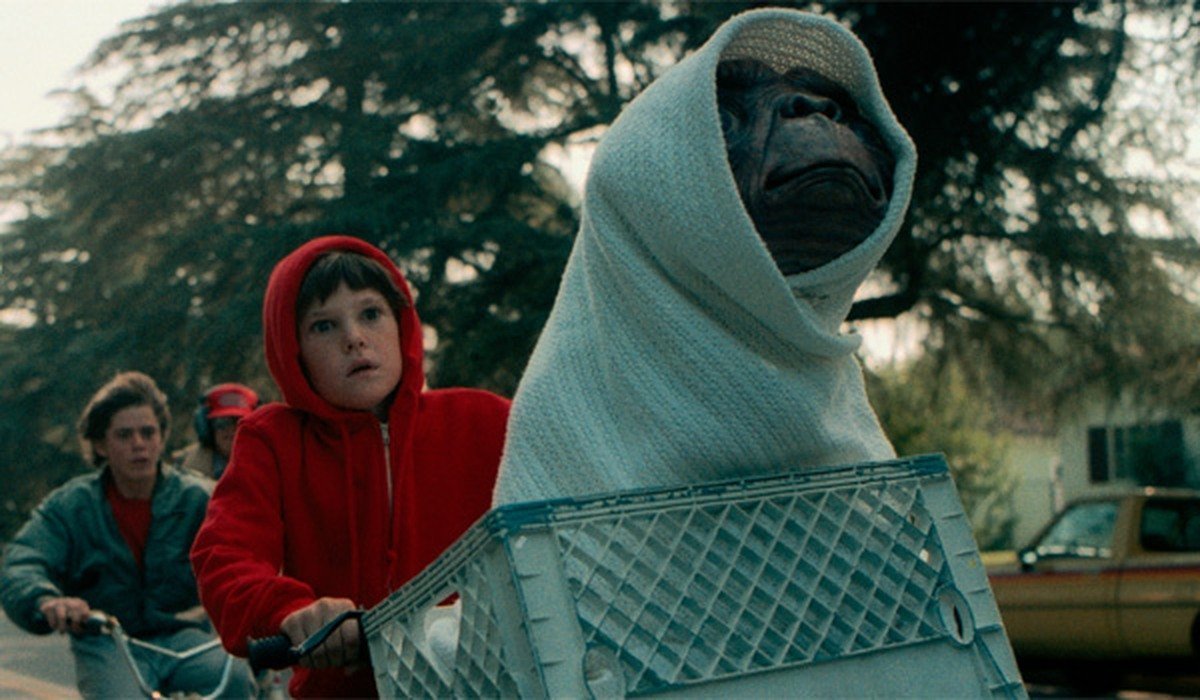 When E.T. becomes a prominent figure in Elliott’s life, Elliott’s sadness about his father’s abandonment subsides; he has someone to raise, to teach about the customs and cultures of American life, akin to something a parent would do for its child – in a way, E.T.’s naiveness is perfectly matched by Elliott’s paternal outlook on how he is to get E.T. adapted to Earth life. Michael and Gertie, both children affected heavily by their father’s abandonment (he is feeling the stress of being “The Man of the House,” which we get the sense that his father probably told him as he left, and she’s unable to fully understand but know sadness lingers throughout the house) are pulled to E.T. because it allows them to forget that pain, too. In their abandonment, the Thompson siblings find unity in taking care of E.T. and in doing so, realize that they’re not alone and that all three of them can bond together and grow together from this experience. This parallels Spielberg’s own life, as he chose to be that role model his younger sisters needed; gone were the days of antagonizing his siblings, he now felt a newfound honor towards them – we see this in all three of the characters, but especially Michael, who grows a stronger bond with Elliott.

Through E.T., the Thompson children have created a landscape in which their reality is distorted: Elliott immediately demands that he wants to keep E.T. and his siblings chime in and choose to help raise the alien. Spielberg establishes this distorted reality through funny and charming scenes – the moments at Elliott’s school where E.T. has control of Elliott are priceless, the Halloween sequence is iconic – but it is also established that their bond is hurting the other: it isn’t quite clear to me but I think this is Spielberg showcasing his first “crack” at Elliott’s paradise he’s conjured up because although E.T.’s presence has been positive, he is slowly killing Elliott due to his obvious inability to sustain his life on this Earth for much longer and because he’s imprinted on Elliott to stay alive and that’s failed, Elliott (and his paradise) begin to die too. We cannot live as though the pain isn’t there – Elliott has pretended that the abandonment of his father is healed because of E.T.’s presence – because we know it cannot be healed properly – Elliott begins to die because E.T. is only a temporary solution to the overall problem. Spielberg’s imaginary friend was presumably a tremendous help to him, but it isn’t real: it isn’t a solution.

Also, Read: Spielberg (2017): A Modest Storyteller vs The Spectacle

It’s here with this viewing did I realize that the common criticism against Spielberg is incredibly wrong: it’s through his Cinema that he expresses his own emotions and through this film, do we see him reconciling with that pain of being abandoned by his father as a child. Through his Cinema before this and after, we are seeing a man pour his heart into every project he’s ever made and allow us, the viewer, to understand not the filmmaker behind so many beloved classics of American cinema but the boy who looked up at the stars wondering why his father left him: through E.T. the Extra-Terrestrial, we are seeing Spielberg come to terms with this pain as an adult and not allow it to hurt him anymore. E.T. being the temporary void to fill in Elliott’s heart is Cinema being the temporary void in Spielberg’s; the moment that E.T. says “I’ll be right here” and points to his forehead is Spielberg finally realizing that with the happiness he harbors in his mind, it will help heal his broken heart.

E.T. the Extra-Terrestrial is Spielberg’s most personal and important film because it allows us to look past the filmmaker and artist and peer into the heart of a boy whose own abandonment continued to eat at him as an adult. Through the eyes of a child protagonist, we are able to see the true emotion and pain that abandonment has on someone and the impact it has on their life through an unfiltered experience: Henry Thomas’ performance is the greatest child performance in all of Cinema because of his remarkable believability and innocence displayed on-screen and through this performance, we are seeing one of the most heartbreaking and raw depictions of abandonment the Cinema has ever seen. It’s through Elliott and E.T.’s journey that Spielberg seeks comfort in his own life and through E.T. the Extra-Terrestrial, we get the idea that he gained some of that healing that helped him grow.

The Night Comes For Us (2018): Elevating the Indonesian Extreme Action Genre