“It isn’t a calamity to die with dreams unfulfilled, but it is a calamity not to dream.”

This article aims to illuminate the fact that Chilean cult figure Alejandro Jodorowsky and American auteur David Lynch share a common ground aside their doomed project DUNE, and it has nothing to do with boating, as the title misleadingly suggests. One’s dream is someone else’s reality. Jodorowsky’s ambitious unborn baby is Lynch’s nauseating half born fetus (Eraserhead reference). But let’s not brood over DUNE now, as there is already a remarkable documentary (Jodorowsky’s DUNE) on this subject and I have nothing new to add. Both artists have invented their own cinematic language that disrupts conventional coherency and assaults psyche of viewers by employing surreal imagery. In addition to drawing parallel between the careers of two artists, my main intention is to explore their shared dream that didn’t materialize and how humanity has been deprived of something great. 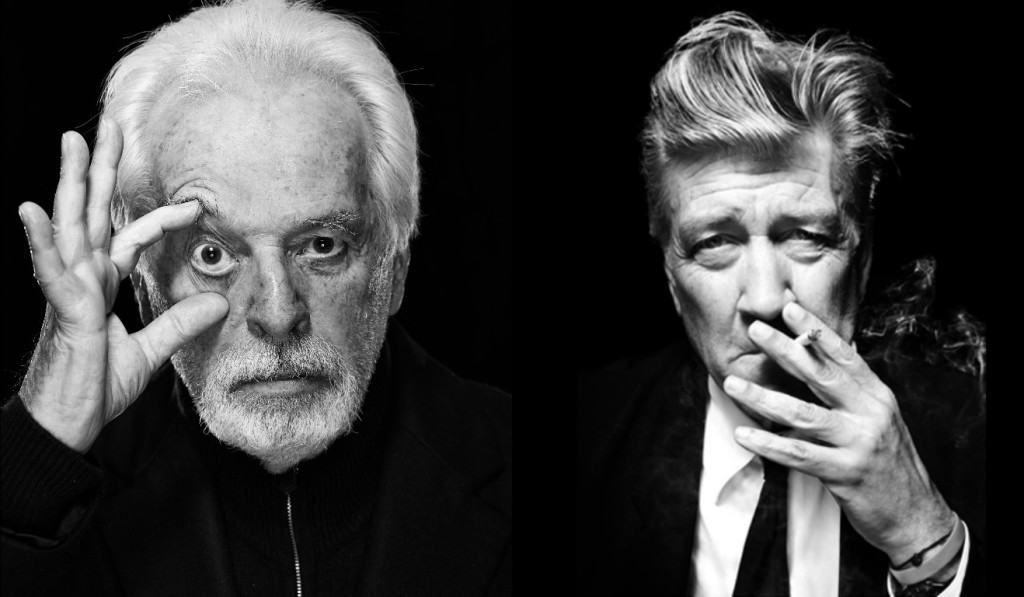 Also Read: FILMMAKERS NEED TO LEARN LYNCH AND SHUT THE FUCK UP

Alejandro Jodorowsky, the god of midnight cinema, has been more renowned for his unproduced films over the last two decades. His unreasonably ambitious ideas would often scare the shit out of studios. The prodigious failure of his ill-fated project DUNE left him shattered and desolated. After extensive pre-production, DUNE finally ended up in the lap of Lynch in early 80s. During that period, Jodorowsky channelized his art towards comic book medium and created some masterful works (i.e. The Incal) in association with legendary French artist Moebius.  After staggering success of his cult film ‘The Holy Mountain’, which immediately emerged as the monument of midnight cinema, Jodorowsky made two disastrous films ‘Tusk’ and ‘The Rainbow Thief’ (the latter is disowned by the filmmaker). But during that same period, Jodorowsky had been working on some truly Jodorowsky-ian films.

The collaboration of Jodorowsky and Lynch seemed next to impossible, especially after he went so far to call Lynch’s version of Dune ‘awful’, but it happened. Well, almost. Jodorowsky and Lynch gathered to make not only one but two movies. The first film in the list of unproduced films of Jodorowsky is called ‘Sons of El Topo’, originally known as ‘Abel Cain’, a sequel to spiritual western epic ‘El Topo’. This film was supposed to be financed by Parallel Media. For this mightily ambitious project, Jodorowsky demanded $30 million, which was never granted by the production house. Apparently, the project was aborted, leaving ‘Sons of El Topo’ unborn. However, the fragments of this film still exist, as if ghost without the body, in form of graphics. 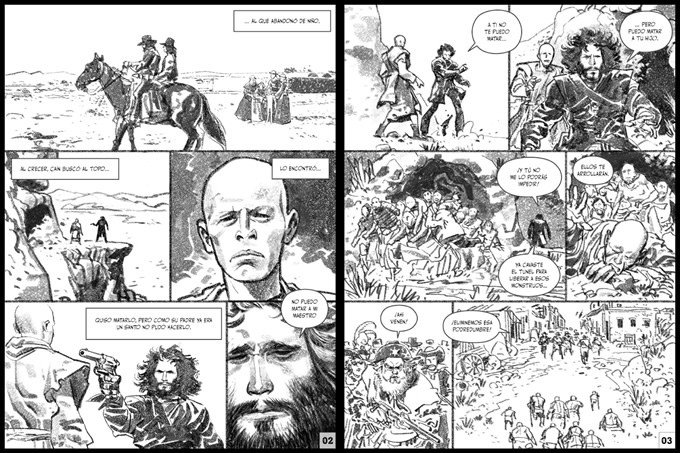 There is another unfinished Jodorowsky film that really fascinates me, and is never discussed as much as ‘DUNE’ or even ‘Sons of El Topo’. It’s called ‘King Shot’, a ‘metaphysical spaghetti western’ as described by writer-director Jodorowsky. The film had David Lynch as an executive producer, along with Hungarians Lazlo Kantor (The Trap) and Simon Shandor as lead producers. The film was financed under Absurda production, co-partner with Kantor. The cast of the film included Nick Nolte, Asia Arjento, Udo Keir, Santiago Segura, possibly Jhonny Depp and most importantly Marilyn Manson as a 300-year-old cannibalistic pope who shoots laser beams from his eyes. Oscar-winning cinematographer Vilmos Zsigmond (Close Encounters of the Third Kind) was on board to shoot the film.

The sheer possibility of association of three mavericks (Jodorowsky, Lynch, Manson), driven by their madness, is brain exploding for me. The preliminary design sketches of ‘King shot’ (which depicted a man as gigantic as King Kong and a Jesus-shaped casino in the middle of dessert) suggested something as grand and promising as DUNE. The shooting of the film was supposed to start in Oct 2009, in the desert of Spain. Obviously, it didn’t happen, mostly due to insufficient finance. Life of Jodorowsky is full of Ideas that never translated into production phase and exist only in forms of sketches. Despite all psychological wounds, the spirit of an artist is still undaunted. To quote him, “I don’t believe in failing. I have dignity. I will never fail; if I can’t do it in movies, I’ll do it in comics. If I can’t do it in comics, I’ll do it in a written book.”

I see uncanny similarities between Jodorowsky and Lynch. It starts with their directional debut features ‘Fando y Lis’ and ‘Eraserhead’ respectively, both approximately 90 minutes long riotous films that confronted viewers with shockingly surreal imagery and became instantly famous among the underground audience. Above all, Jodorowsky and Lynch are radical artists, who directly and boldly challenge their audience in their own way and still enjoy the cult following. Moreover, they have exactly one movie that can be considered ‘odd one out’ in their entire filmography, namely ‘The Rainbow thief’ and ‘The Straight Story’ respectively. These are only ‘family films’ they have made. There was a time in the career of both artists when they sunk into their relative artistic obscurity. Fortunately, Jodorowsky has already made a huge come back with his double premiere of ‘The Dance of Reality’ and ‘Jodorowsky’s Dune’ at Cannes Film Festival 2013. Lynch is all set to return to TV with the revival of his strange and wonderful series ‘Twin Peaks’. Meanwhile, Jodorowsky is busy in post-production of ‘Endless Poetry’, which is the continuation of his poetic autobiographical account ‘Dance of Reality’. Hopefully, we will be witnessing works of these legendary artists on either big or small screen in years to come.

All stories have suffering. In the end, not all dreams are fulfilled, not all wounds are healed. Only memories are left, to re-write the painful past. Dreams drive the boat. Sometimes boat doesn’t sail ashore. There are so many artists drowned in this ocean of ambition. Their demise is glorious. I know it seems impossible at this stage, but there is a fanboy inside me that yearns to see Jodorowsky and Lynch go boating.

Note from author: If you’re reading this, you’re probably a huge fan of David Lynch and/or Alejandro Jodorowsky. If that’s the case, I highly recommend you to check out these awesome alternate posters of ‘Eraserhead‘ and ‘Jodorowsky’s Dune‘ created by Matt Chinn. I share this with the hope that art will reach to its intended audience. 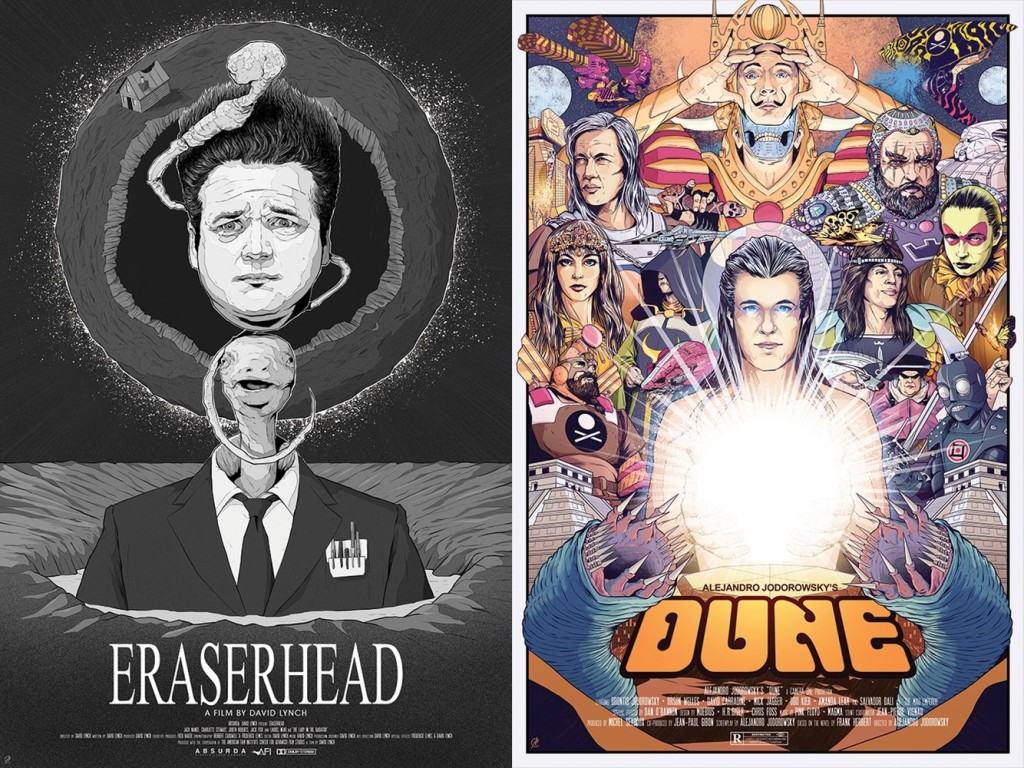