Home»Articles»Anatomy of: Taxi Driver Scene – “Late for the Sky”
Articles/Essays

Anatomy of A Scene: Taxi Driver Scene – Late for the Sky: “How long have I been sleeping? How long have I been drifting along through the night?” As Travis Bickle, with a .44 Magnum in his hand , watches American Bandstand, the words to Jackson Browne’s ‘ Late for the sky ‘ seem to put him in a trance . The tune which is originally about romantic alienation fits perfectly into the theme of the film and masterfully exemplifies how important it is for Travis to come into ‘real’ human contact.

In the preceding scene leading up to this moment, Travis sticks it up to a man who was trying to rob a convenience store and it is here we first see Travis taking action and matters into his own hands . The violence one encounters here definitely raises an eyebrow and it almost seems Travis is proving to himself and to the audience he’s not kidding around anymore.

Just when the viewer is trying to wrap his head around the series of events that took place just a few moments ago, we see him in his living room in front of a television set holding the same gun he used to kill the robber. However, he seems to be a different man and has this strange aura of calm around him. He waves and holds the gun with no conviction almost like a man who has no use for it. For a few seconds he points the gun straight at the camera, like a kid trying to emulate the cowboys from the Hollywood Westerns and it is when he takes notice of what’s happening on his television screen that he forgets about the deadly weapon in his hand.

For a good few seconds, the camera is completely on the television screen and we see a young couple embracing each other and dancing without a care in the world. The very next shot is of Travis being mesmerized and in a trance like state and it is here we get a great insight about the man’s character. We immediately realize Travis craves for a ‘real’ connection with a person and he seems to wonder where it all went wrong for him.

This scene also puts a few other things into perspective and it becomes clear the killing in the previous scene was no spontaneous act but a culmination of a series of events that have led to Travis’s alienation from society. The central theme of the film as Martin Scorsese stated in an 40th year anniversary reunion interview is that of loneliness and isolation. The film portrays how difficult and challenging it is for a troubled and tortured individual to seek happiness and solace in human company especially in a world he considers to be fake and phony. 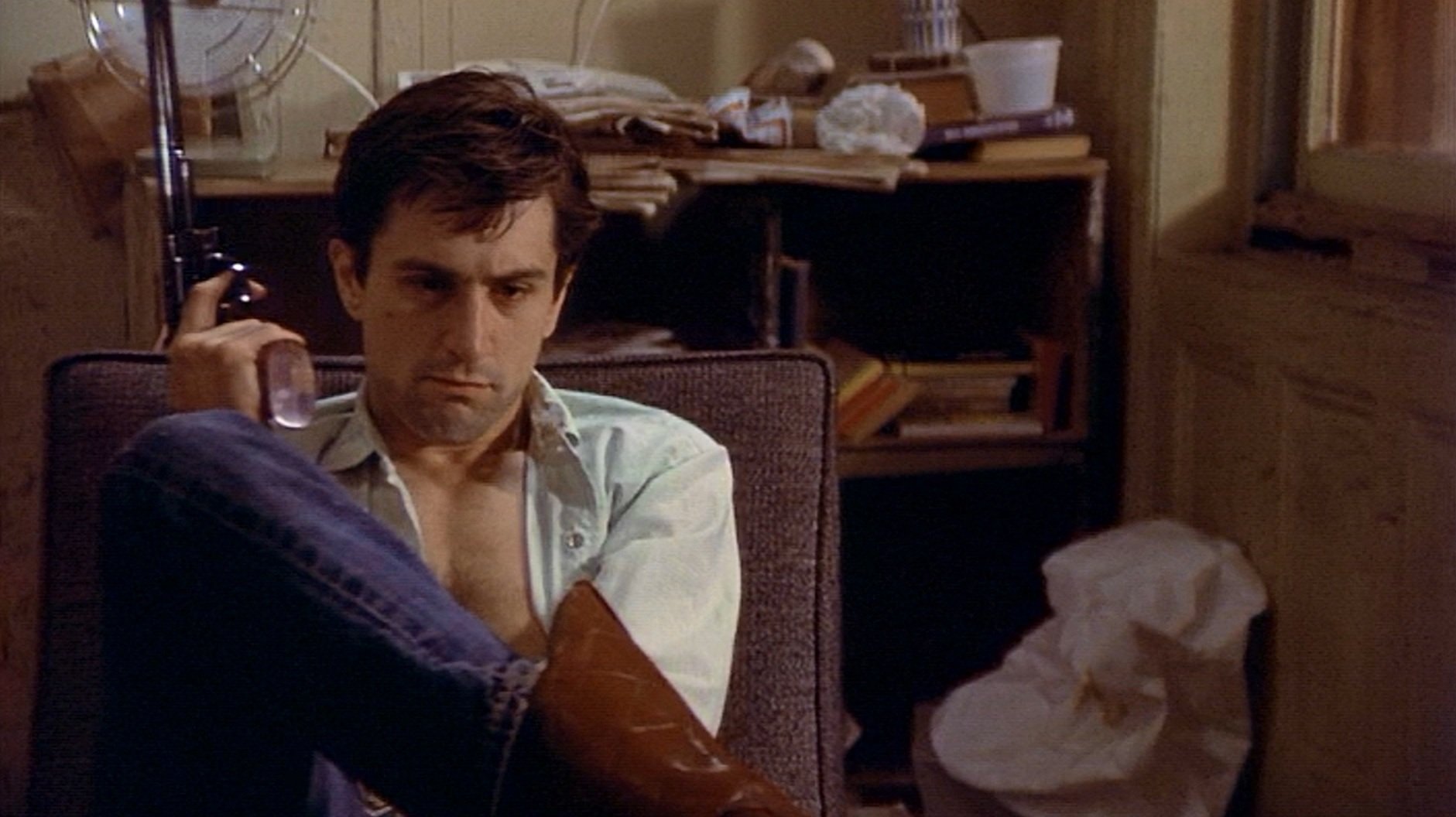 A classic piece of advice that is given to screenwriters is to avoid voice-over narration at all costs because it contradicts the basic rule of film making which is to show rather than tell. Many argue voice-over narration is lazy and flaccid writing and there is nothing special about it.

Voice-over narrations usually help the audience a great deal to understand a character better however this could not be truly said for Taxi Driver. Although Travis lets the audience know what he’s thinking at most times we still don’t get a great insight into his character. This completely changes in this scene where he does absolutely nothing except for simply watching a regular TV program.

It is amazing how De Niro is able to convey an array of emotions without even uttering a single word. Along with a mixture of emotions, Travis seems to be full of contempt of the mainstream culture for feeding him lies and forcing him to buy into this version of life that can never truly be his. It doesn’t matter how desperate he is for such a relationship because his instincts and his perception of the world would never permit him to pursue happiness and attain peace of mind.

Even though Travis is desperate for human company and relationship a part of him rejoices in the fact that he’s different from the others. He believes others to be ‘sleeping’ and considers himself to be a heretic who sees others for what they truly are – rat bastards who aren’t afraid to stomp on others to get what they want.

Every time I revisit Taxi Driver I’m drawn into Travis’s world and his sense of individuality and I’m fascinated and intrigued how he goes about his business. The viewer sympathizes with his conflict and roots for this walking contradiction to get everything he wants in his life. He’s a polarizing person and a contentious figure but a hero nonetheless.

Garm Hava [1974]: On the Precipice of Belonging