The Peripheral (Season 1), Episode 7: The latest episode of Amazon Prime’s “The Peripheral” is called ‘Doodad.’ And like its eponymous deceptively benign device, this episode provides explosive drama, when the right amount of pressure is applied on the trigger. The much-needed boost by the turn of events at the climax of this episode floats the dwindling series alive.

Inspector Lowbeer (Alexandra Billings) meets the three peripherals of Flynne (Chloe Grace Moretz), Burton (Jack Reynor), and Conner (Eli Goree), at the house of Lev Zubov (JJ Field). She expresses her desire to talk with the three of them, separated from the prying eyes of Zubov. Flynne accepts, but on the condition that Wilf Netherton (Gary Carr) also joins them.

When Lowbeer instructs her assistant robot, Beatrice (Anjli Mohindra), to take Burton and Conner and engage them in practice fighting simulation; she utilizes the time to inform Flynne about some of the variances in timelines. For example, the Flynne Fisher of Lowbeer’s timeline marries her childhood sweetheart, Tommy (Alex Hernandez). Conner does not lose his limbs and Burton dies in the war in Texas. 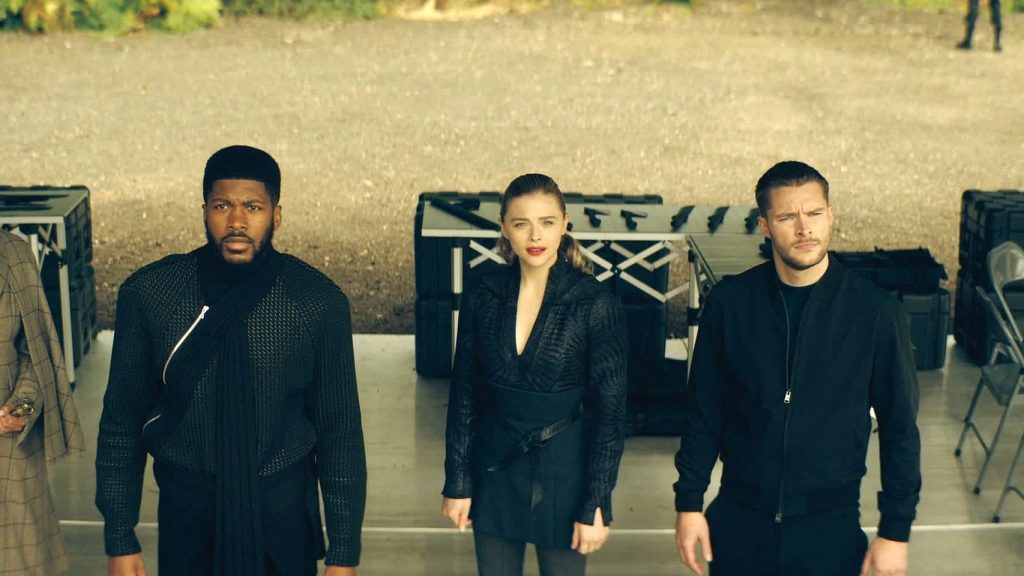 Lowbeer informs that the stub or timeline of Flynne is at an accelerated speed to meet the jackpot, the apocalypse. The haptic implants that Burton and his friends have used, also seem to be introduced ten years earlier, in comparison to Lowbeer’s timeline. Lowbeer’s assumption alludes to the Research Institute as the mastermind behind all these variances.

One thing of importance that Flynne learns is that Lowbeer might have the power to cut the connection between their two worlds. The bridge that the Peripheral is between the future and the past, might be made inactive by the Metropolitan Police officer.

Tommy’s Search for the Truth

Meanwhile, Tommy, who has realized that his boss, Sheriff Jackman is in Corbell Picket’s (Louis Herthum) pocket starts to poke around for more evidence. He checks his wrecked car and finds Bob’s (Ned Dennehy) gun and the ‘Doodad’. The doodad here refers to the alien gadget that we have seen Bob (and previously Daniel) use. A sonic gun.

Tommy realizes Jackman has not reported any of these and he takes the gun and sonic device. He gets a call from Jackman at that precise moment and is asked to report to Corbell’s house. Tommy finds a scene of the massacre there as it seems Bob has brutally killed Mary, Corbell’s wife. Tommy confronts Jackman, but Jackman threatens him. Reminds him that his words, along with Corbell’s resources, would drown out Tommy’s meek protests. Jackman offers Tommy to join in the service of Corbell.

Ella Fisher Gets a Visit from Bob

Ella (Melinda Page Hamilton), Burton and Flynne’s mother, suddenly realizes she is going blind again. The medicine that was provided by Wilf previously seems to have stopped working. She, with help from one of Burton’s friends, Reece, gets to the local clinic. Dee Dee (Hannah Arterton), Tommy’s fiancé looks into Ella’s condition as Reece waits outside.

Bob, bloodied and with more killings on his mind, reaches the clinic as well. With a trick, he draws Reece out and gets into a fight. The older assassin manages to down the former marine. He takes Dee Dee and Ella hostage, expecting the Fisher siblings to come rushing there.

The Peripheral has been edging towards the explosive drama and crime thriller category since the last episode. In this episode as well, the sci-fi elements take the back seat and the character arc-driven drama takes the wheel. The last couple of minutes have been engaging enough to make us eagerly wait for the next episode, which would be the season finale.

Is Flynne’s timeline an experimental stub?

Lowbeer’s input does raise the question of whether Flynne’s stub or timeline is actually created by the Research Institute. It was implied that Conner lost his limbs due to a behavioral experiment, orchestrated by the RI. Lowbeer’s input about her own timeline more or less confirms that the 2032 timeline we are following, where Flynne Fisher started using Peripheral, is the one created by RI.

How did Fishers beat Bob?

Burton and Flynne, as expected by Bob, rush towards the clinic when they got a message from Reece. The message was sent by Bob using Reece’s phone. Bob could not afford to sway from his plan of killing Flynne and Burton, as his daughter’s life depends on it. Ella Fisher says there is another option for Bob. Killing himself.

This makes Bob get up from his seat. To check on Reece. Which allows Burton to pinpoint his position via thermal vision. Burton takes the shot and kills Bob.

Ash (Katie Leung) and Ossian (Julian Moore-Cook) often discuss in their own cryptic language. To hide the meaning from their employer, Lev Zubov. So, it comes as a rude shock to them when Lev Zubov catches them talking in cryptic and replies in the same language. Zubov understands the scheming of the two Technicals.

Ash sees no option but to reveal that she knows what Aelita planned. Aelita stole the information from RI and wanted to store it inside the haptic implant of Burton. In that way, the RI would not be able to trace that as it would be hidden in the 2032 timeline or stub.

Only Burton never arrived, it was Flynne who arrived in Burton’s peripheral. The data, thus, resides in Flynne’s brain as a bacteria. That is the reason Flynne is having all her health trouble and the brain scan also showed her the same. Ash confesses they were planning to decrypt the data from Flynne’s bacteria and give it to the Neoprims, the organization that wants to bring the world order down.

Zubov lets them live with a warning that further double-crossing will bring painful death for both of them.

Meanwhile, Cherise also visits Lowbeer and immediately puts her in an apprehensive position by revealing Beatrice’s likeness to Lowbeer’s dead daughter. Cherise wants Lowbeer to get the data stolen by Aelita. She reminds the inspector that that data, under the hands of the Klept, could be dangerous.

Tommy, on the other hand, has had an awakening. He realizes he loses either way with Sheriff Jackman. If he compromises and joins Corbell, his morality would not let him live peacefully. If he tries to do the right thing and arrests both of them, eventually he would not be able to put them behind the bars and as a result, would lose his job and his life too. So, he makes a different choice.

Using Bob’s gun he kills Sheriff Jackman. As if Bob only killed the Sheriff. A shocked Corbell Pickett is also knocked out by him with the help of the sonic ‘doodad’ gun.

The Fabelmans (2022) Review: Spielberg Weaves His Most Uplifting Film From Heart-Breaking Memory