The Peripheral (Season 1), Episode 6: In its sixth Episode, Amazon Prime’s “The Peripheral” is clearly flaunting indications of holding back for future seasons. The show’s Cyberpunk facets are yet to elevate to the next level. It is currently meandering in its Sci-Fi aspects, while its human drama and thriller aspects are working overtime to keep the audience engaged with some sincere performance from its cast.

The opening scene establishes what was hinted at in the last episode. It was indeed Conner (Eli Goree) who lost his limbs for experimentation done on their stub (timeline) by the late Doctor Grace. He did try to save a dog that carried explosives. Conner wakes up from that nightmare in the present time (2032).

Meanwhile after having a tete-a-tete with Cherise, Flynne Fisher (Chloe Grace Moretz), in her Peripheral, finds some new information about the future world she keeps venturing into. Wilf (Gary Carr) tells her that the fastidiously placed and always-walking-happily crowd is nothing but an augmentation done by the Research Institute (RI). It is fake. Manufactured for something called the ‘Mood Enhancer’. With a swiping gesture of fingers, the mimicry vanishes. Exposing the almost deserted and not-so-well-to-do London. The harsh reality is decrepit and desolate.

In the last episode Tommy Constantine (Alex Hernandez) was thwarted and heavily injured when an unknown attacker rammed his car with an invisible SUV. And took off with his prisoner, Bob (Ned Dennehy). While discussing this with his department, Tommy gets a cold shoulder from his superior, Sheriff Jackman (Ben Dickey). Tommy quickly notices the shoes of the Sheriff (remember he saw the shoes of his assailant while hanging from his seat belt in his upside-down car) and realizes that it was the Sheriff who attacked him.

Tommy realizes that Bob has been handed over to none other than Corbell Pickett (Louis Herthum). He reaches out to Burton (Jack Reynor). Burton asks him not to meddle in this, otherwise, he might not survive the next time. 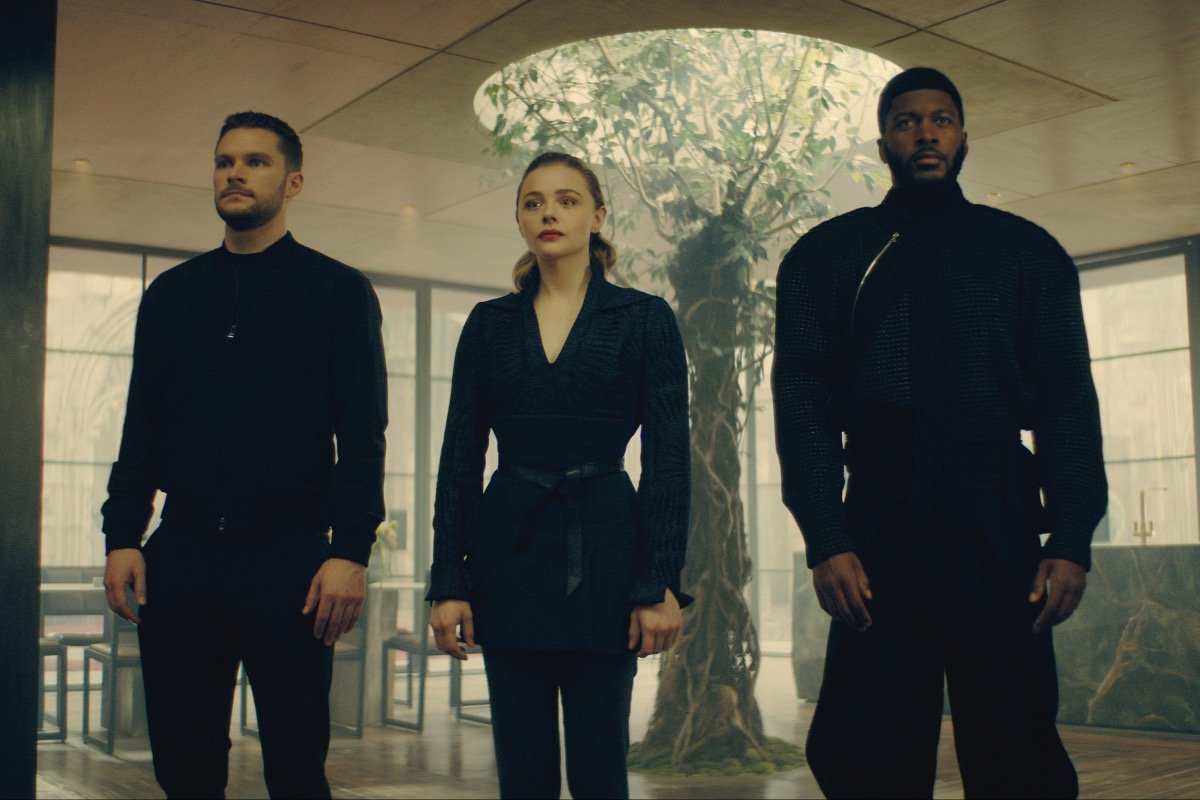 Corbell and Mary Pickett (India Mullen) entertain their guest, and prisoner, Bob. While providing perfectly roasted meat, Corbell shows a glimpse of how Bob is chained. As Bob tries to take a knife and drive it through Corbell’s neck, he immediately gets a high-voltage shock from his collar. A collar that the Pickets have bestowed upon him.

Corbell makes it quite clear that he does not like interference in his line of work. In this context, the work refers to killing the Fishers. Corbell seems to have access to all the data that the Sheriff can access, as the Sheriff graciously invites him to his office and tells him his passwords. Meanwhile, Mary accompanies Bob with the shock detonator tightly clutched in her hands.

The Visit from the Detective

Detective Lowbeer (Alexandra Billings) with her assistant Beatrice (Anjli Mohindra) investigates the incident where the real Daniel was killed by his own android companion (here referred to as a Koid by the detective). The killing was done through the instructions of Cherise Nuland. But it happened during a fight with Wilf and Flynne, who were looking into Aelita’s lairs.

Lowbeer visits the Klept leader Lev Zubov (JJ Field) at his lavish house. She seeks an audience with both Zubov and Wilf. After a series of veiled threats under the pretense of an innocuous conversation, Lowbeer quickly asks Zubov to come clean with her. And show her the peripherals.

The sixth episode introduced two more characters. With one of them, at the very least, bearing strong significance for the story. The signs are clear from Scott B. Smith and executive producers, Lisa Joy and Jonathan Nolan. They want one or more future seasons. The Cyberpunk world of William Gibson’s novel is yet to be fully delved into. The show is taking its sweet time to divulge one or two details about this world.

This is not necessarily poor storytelling, however, it is definitely risky storytelling. In today’s cutthroat streaming business and abundance of shows, patience tends to wear thin. However, for me at least, “The Peripheral” maintains its grip on the humane tale and thus remains engaging. Performances from Eli Goree, Chloe Grace Moretz, Jack Reynor, and others also help in this regard.

How did Bob trick Mary Pickett?

Bob keeps Mary in conversation when he notices that the big aquarium in the Pickett living room is full of Saltwater. He manages to hide a heavy paperweight and under the guise of observing the aquarium, he breaks the glass. Saltwater drowns him and Mary. Bob holds Mary’s leg and Mary electrocutes him.

But this also electrocutes Mary as Saltwater helps in conducting electricity. Bob holding Mary makes a circuit in saltwater that passes electricity from Bob’s collar to Mary. After both of them get knocked out by the electric shock, it is Bob who wakes up first.

Who is Detective Lowbeer?

While Detective Lowbeer is questioning Zubov and Wilf, Zubov’s Technicals, Ash (Katie Leung), and Ossian (Julian Moore-Cook) are preparing the two Peripherals Flynne asked for. One for Conner and another for Burton.
In 2032, Burton and Conner are discussing the possibility of Conner living out his life in the future via the Peripheral. With Catheter and saline for his physical body. Burton compares that with suicide, but opting for a slower pace. To that Conner replies, and profoundly astutely at that, that life is like that.

The two former soldiers’ discussion is interrupted when they, along with Flynne, are asked to log in to the Peripheral. The moment they log into their respective Peripherals, they meet Detective Lowbeer.

Detective Lowbeer currently seems like a wild card. Early in the show, it was indicated that since the apocalypse (known as ‘The Jackpot’), the world is run by three entities. The wealthy Klept, the technological merchants RI and the law and order protectors, Metropolitan police. In this world, neither RI nor Klept can be called ‘good’. It is possible the Met, or its representative Lowbeer, would also be something like that. Something in between good and evil.

In a fight with one of the Peripheral designers, Flynne and Wilf learn that Aelita represented Neoprims. It is the supposed terrorist organization that has been challenging the new world order ever since the ‘Jackpot’. Wilf has once killed one of the leaders of the Neoprims.

Where to watch The Peripheral