Disenchanted (2022) Review: Sequels scarcely live up to the excellence or expectations set by their original, failing to recapture the magic, essence, and creative spark, becoming a lousy affair rather than a grandeur experience. The follow-up allows you to take a trip down memory lane and lets you experience what the much-loved characters have been up to in the meantime. However, when a classic film has shoes that are just too big for their misguided sequels to fill, it rather becomes too underwhelming and disappointing for the forerunner’s fanbase.

Disney’s long-awaited sequel of the beloved musical fantasy romantic comedy Enchanted (2007) falls into the same trap and fails to measure up to the first installment. The original film became an instant classic for its post-modernist and revisionist take on the fairy tale genre, the self-parody, and deconstruction of classic Disney Princess tropes, the memorable and entrancing performances of the cast as well as the truly terrific score. Amy Adams’ brilliant and charming performance as Giselle (Amy Adams), the wide-eyed, singing and dancing Andalasian-born princess-to-be, and her adventures in cold-hearted New York City, launched her into a mainstream sensation.

Unsurprisingly, it commences in the same tradition of Disney’s 2-D hand-drawn animated films, much like its original, with Giselle’s chipmunk sidekick of Pip functioning as a narrator, telling the story of Giselle’s adventures and her happily-ever-after – through a true love’s kiss with the handsome New York lawyer and single dad “McDreamy” Robert Philip (Patrick Dempsey). Set ten years after her happily-ever-after in New York, we find Giselle happily married to Robert and is not only a mother to Robert’s daughter Morgan (Gabriella Baldacchino), who has become a stereotypical “sarcastic” teenager, but also has given birth to her first daughter with Robert, Sophia.

Disenchanted is a breakaway from its predecessor as it showcases Giselle finding it difficult to adapt to the real world in the city. She feels disgruntled and disillusioned with her domesticity and her fractured relationship with Morgan and misses the easy happily-ever-afters that are a natural part of life in Andalasia. As a result, they decide to transplant themselves into the comforts of a “fixer-upper” in the suburban community of Monroeville, hoping for more of a fairytale life, much to the dismay of Morgan. When a furious Morgan tells Giselle she’s only her “stepmother” after a fight, Giselle uses the wishing wand, gifted to her by Edward (James Marsden) and Nancy (Idina Menzel), King and Queen of Andalasia, to wish for a fresh fairytale beginning.

While her wishes come true, things go terribly wrong and Giselle gets more than she bargained for. She regrets it instantly as our cheerful and goodness-personified Giselle turns into a stereotypical Evil Stepmother, a pragmatic and skeptical Robert transforms into an adventure-seeking hero who hunts dragons and giants, and the surly teen Morgan switches into a real-life Cinderella, a daydreamer with a down-to-earth attitude who is forced into servitude and tormented in her own home by her wicked stepmother. As anticipated, when the whole suburb transformed, the neighborhood queen bee, Malvina Monroe (Maya Rudolph), who made Giselle feel more out of place than ever, became an actual Evil Queen. Monroeville is slowly turning into Monrolasia as it draws its magic from Andalasia while Giselle’s goodness turns into evil, permanently. The facade of “fairytale life” cracks when the clock strikes midnight, and Giselle has to unwish her wish before the clock strikes midnight. 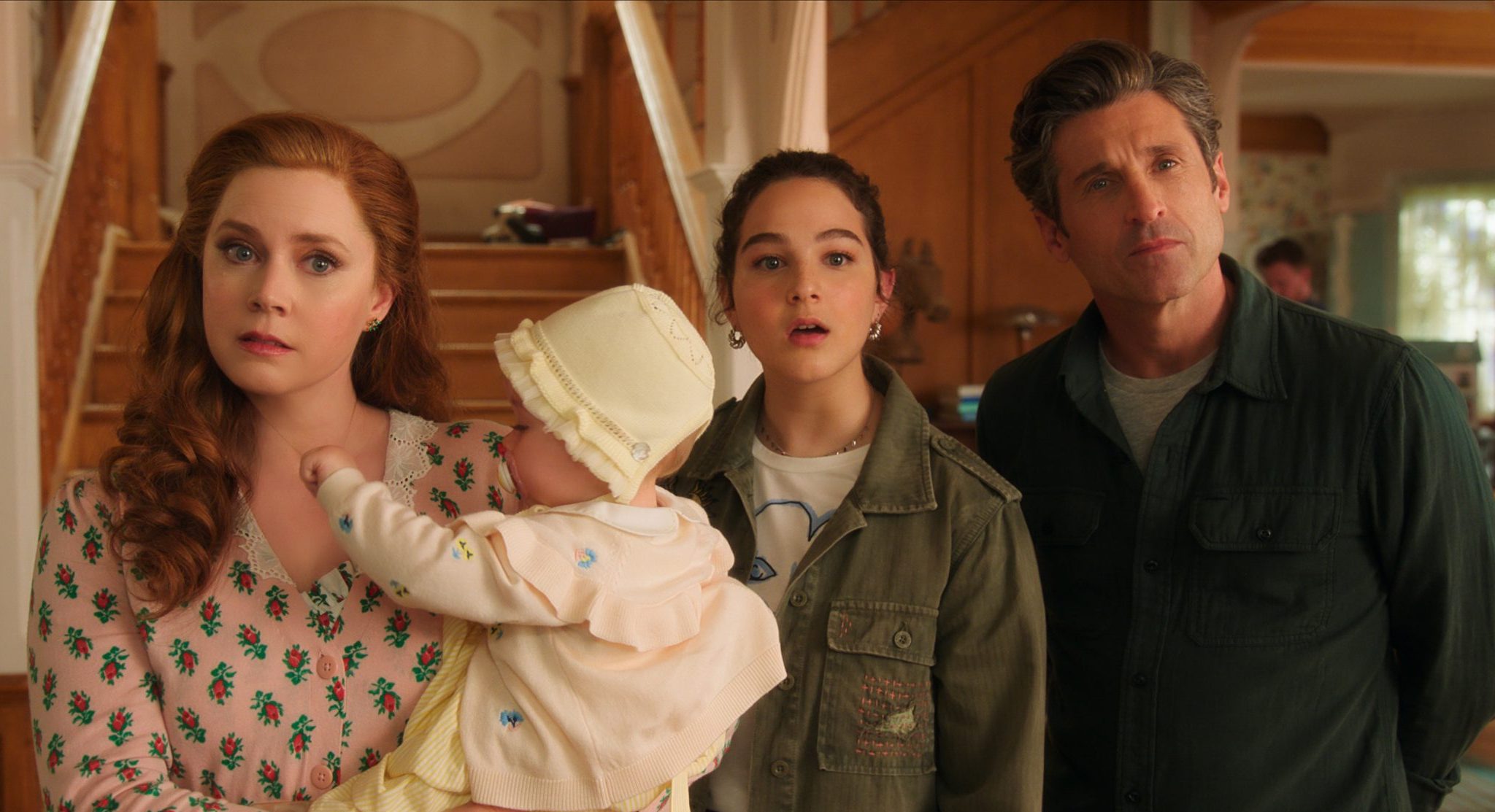 Directed by Adam Shankman (Hairspray), Disenchanted follows the same tradition and framework as its original, for it combines Disney’s classic 2D animation style with live-action, utilizes self-referential, meta-humor and commentary to satirize the genre and is full of clever references. However, unfortunately, it lacks sharp animation, the wide-eyed fish-out-of-water protagonist, a pure-evil antagonist, significant supporting characters, and overall, the novelty, peculiarity, and allure of its predecessor. It appears as a simple morality tale and wish-fulfillment fantasy and reeks of a lesser plot that features little room for character development. It seems like the plot is ripped off from Marvel’s WandaVision in which a grieving Wanda aka Scarlet Witch unleashed her surge of chaos magic to create an idyllic suburban life in the town of Westview.

Disenchanted plays like a self-parody or spoof, paying homage to Disney’s animated features, and it retains its integrity and stature in its world-building. It packs numerous nods to the Disney classics, as we witness Morgan as the direct descendent of Snow White, Sleeping Beauty, and Cinderella, Giselle becomes more like Lady Tremaine from Cinderella, Giselle’s chipmunk turning into an evil cat in the vein of Lucifer from Cinderella, the Evil Queen Malvina complete with the magic mirror, a nod to Snow White and the Seven Dwarfs, and Nancy turns into the fairy godmother who turns Morgan’s ripped dress into a sparkling new ball gown like Cinderella’s. The dancing household utensils bring back memories of Beauty and the Beast, Morgan’s escape from the tower reminds us of Tangled, three fairies taking care of Sofia pulled from Sleeping Beauty, and Morgan’s song through the market is reminiscent of Belle in Beauty and the Beast and Ariel in The Little Mermaid.

The starry cast, despite their best efforts, couldn’t save this plot riding on nostalgia and memories of the past. Amy Adams is brilliant as usual with her twin act who swiftly shifts roles from the naive and adorable Giselle into the wicked stepmother. Her character who went through a midlife crisis comes out as an enlightened character who has learned the lesson of finding pleasure and fervor in both exciting and quiet moments of life without yearning for perfection and fairy tale. Gabriella Baldacchino as Morgan equally mounts her challenging role to near perfection with her Cinderella act. Nevertheless, it is particularly dissatisfying for the sorry state of some cherished characters who appear only in a handful of scenes, especially Patrick Dempsey, James Marsden, and Idina Menzel, who are sided to the margins with their prescriptive roles. Maya Rudolph, who plays the PTA mogul in Monroeville, and Yvette Nicole Brown, as her sidekick are outlined with poor prospects with a slim chance to show off their comic ranges.

The composer-lyricist duo Alan Menken and Stephen Schwartz, who had written songs for Enchanted and several Disney films, compiled the songs and they work immensely in the narrative but somehow the melodious magic wears off once we come out of it. Menzel’s “Love Power” is perfect as it embodies the classic Disney tune in the vein of Frozen’s “Let It Go.” Giselle and Malvina’s face-off with “Badder” is wicked and ear-catching. The songs are effective and purposeful and match the design but they turn out to be unmemorable.

The film thematically addresses the need to accept the humdrum drudgeries of daily life without slipping into the fantasy of fairy tale half-truths. It reinforces the idea of the original film but it fails to rekindle the magic, charm, and humour of its predecessor. Even though the action is jampacked and tries to impress with visual elements, it couldn’t transcend the poor trappings in terms of subpar plot and character construction. The short glimpses of the suburban locale that we get are a letdown as we feel the dearth of chaos and curiosity of Manhattan and the typecasting of people in Giselle’s life, including herself lacks authenticity and creativity. The predictable final battle is a poor substitute to the original in which Susan Sarandon transitioned into a full-blown fairy tale dragon to duel with Giselle.

Disenchanted paralyzes the magic cast by its predecessor and falls short of sustaining an emotional connection and intensity with the characters. It tries its hardest to make you laugh, but compared to the mix of slapstick comedy and chaotic situations of its predecessor, it feels forced and strained. Despite experimentation and bringing in people of varied ethnicities to let go of white-washing fairytales, the film feels like an inferior version that tries to target and rope in just the younger audience. It has all the makings of a holiday family film, but it struggles to find its footing, unlike the deftly crafted original film. It seems that revisiting the original right before the sequel ultimately put the final nail in the coffin.

Where to watch Disenchanted