Disenchanted Ending, Explained: The after that follows the happily ever after is the crux of Disenchanted. Endings are always magical, and so are happy moments, as is seen in Disney films, but here, per Pip the chipmunk, we get taken back to the real world and out of the fairytale. An enchanted world is what the heart desires, but soon that enchantment may disenchant the caster, leading to the wish of a disenchantment.

The film begins in Andalasia with a recap of Enchanted, featuring Pip reading the tale to two young chipmunks. We then learn of the sequel and get taken into the real world, where Morgan has become a sullen teenager, and Giselle wants to leave New York. Monroeville, their new home, is a distant place, with city citizens unaware of its location. We then see Giselle bid farewell to her furry and feathery friends before encountering sarcasm. Morgan isn’t on board with the move. The girl has grown and gotten disillusioned (or disenchanted) with the idea of magic, fantasy, and fairy tales. 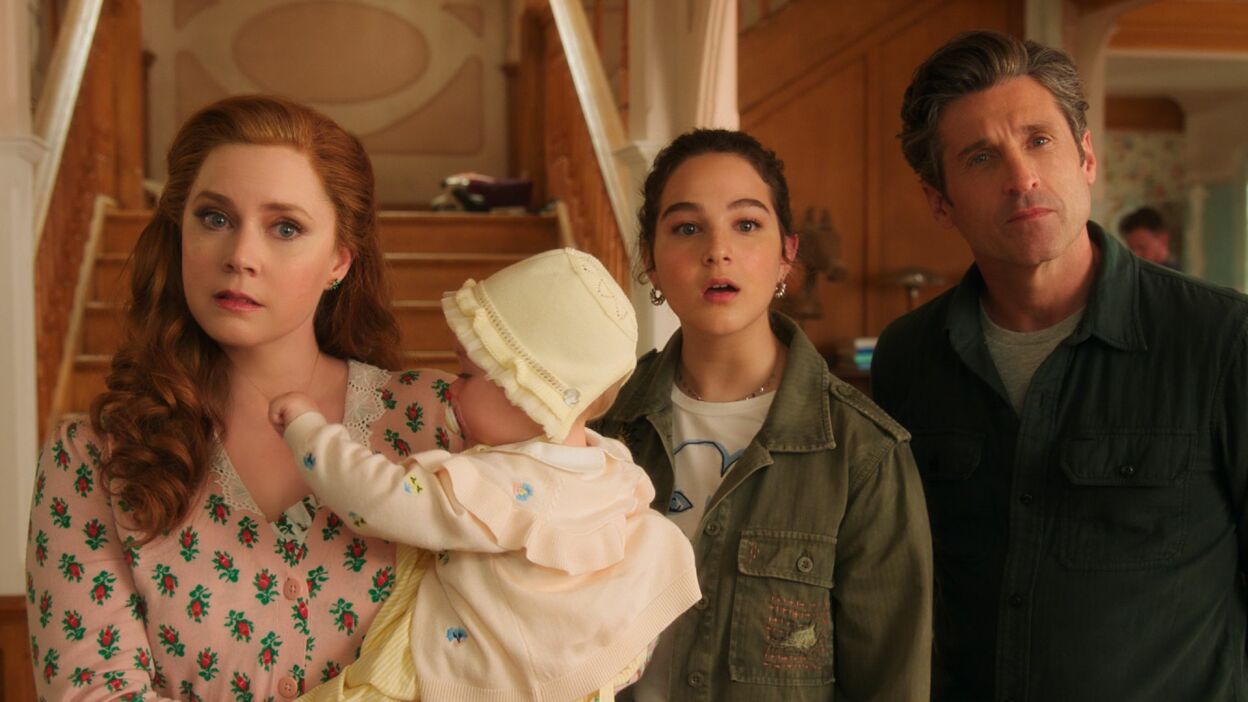 Following a disastrous opening day in Monroeville and an equally lousy day 2, there is a tantrum in the household where tempers flare, and Morgan calls Giselle “stepmother.” This leads her to use her child’s wishes wand, a present from Nancy and Edward, to create a fairytale world. She gets a sweet Morgan, a delightful town, but realizes that Morgan’s words have been worked into the curse. Hence, Giselle has taken on the evil stepmother role from classic Disney films. When Any Adams’ character realizes this, she learns that not everyone is upset with the change, and she will have to fight for her home, her former home, her family, and her wicked self to disenchant the wishes of the enchanted world.

The ending began when Giselle regained her self for a few split seconds and set Morgan down the portal (wishing well) to Andalasia to get help. The teen girl found Nancy and Edward in a dilapidated Andalasia, where weird vines grew into the sky, and the magic of the animated Kingdom was evaporating. Nancy accompanied Morgan to the real world (Monroeville, aka Monroelasia) to help reverse the wish. Giselle used the evil cat Pip to regain the wand and engaged in a magical battle at the Monroefest ball. As they fought, the vines from Andalasia broke through and wrapped themselves all over the hall. Giselle seemed to get the upper hand against Malvina, but she forgot that her family could be used against her.

Malvina used her gifted magic to wrap Morgan in the vines until midnight, after which the wish would not reverse. She even trod on the wishing wand to snap and ensure it would not function. Subsequently, she sat on a chair to bide her time until the clock struck twelve. Robert and Edward then inserted their swords into the machinery to ensure that the minute hand stopped, and Giselle made a plea to Morgan, giving the teenager the belief that she could be the one. Things faded to the following day when no one except Giselle and Morgan knew the events; everyone else functioned as though it was a dream.

Why didn’t Giselle use her wish to reverse the spell?

During the battle with Malvina, Giselle kept saying, “I wish,” and used minor spells on her opponent. As she needed to beat the queen, one may have wondered why she didn’t wish for a reversal or wish her enemy’s magical powers away. For this, one would have to go back to the time Giselle sang the song about wishes. The wish didn’t come true immediately; it was only after the wishing wand was back in its box that the charm took effect. Also, the trip to Andalasia saw Nancy and Edward reveal that such a wish would require all of Andalasia’s magic. Hence, for such a huge wish, Giselle would need time, i.e., a luxury she did not have.

Apart from this, a simple “I wish” would have removed the climax’s cinematic feel and build-up.

How did Morgan get the torn-up memory tree to save Giselle?

Giselle lost herself in her wish and had almost become the evil stepmother. Hence, Morgan had to rely on one core element to get her back, i.e., the memory tree. She went to Andalasia and tried to recover Giselle’s memory tree, but it had lost its charm entirely. The leaves turned to dust once she touched it, as the magic from Andalasia had been pulled into the real world. Morgan then revealed that although Giselle’s memory tree had gone, her memory tree existed in her bedroom. Nancy and Morgan then used the portal to get back to Monroeville and retrieved the memory tree.

Once in the hall, Morgan tripped, and her chart drifted through the air into Giselle’s hands. She dismissed it and ripped it into four, but the pieces turned yellow, sparkled, and reminded Giselle of her true identity. This may have happened as Andalasia’s magic had seeped into Monroeville.

How did Morgan become a true daughter of Andalasia and save the two worlds?

A theory is that Morgan’s desire to save Giselle, her mother, the one she angrily called “stepmother,” has formed a bond between the two. The selflessness has transferred an Andalasian quality to the teen, thereby giving her the power to wield the wishing wand, restore its magic, and save Andalasia/Monroeville just as Malvina sent her curse toward Tyson and Robert in the clock tower.

As someone to cast magic, it is confirmed that Morgan remembered the events from the night before and didn’t just attribute them to a dream. This, per Giselle, is an ability only present in those who can cast a spell, i.e., true Andalasians. However, that’s not all.

Did the magical events have lasting effects?

The events did have a lasting effect, as they brought about a change in one and all. After being advised to do so, Robert found a change in line when he failed to conquer the dragon. Also, Malvina warmed up to Giselle, apologized for her previous actions, and made her feel at home in the community. This seemingly ensured that Giselle managed to get her fairytale life with a happy husband and a welcoming community.

Everything Related To Disenchanted:

Disney’s Disenchanted (2022): Release Date, Trailer, Plot, Cast, And Everything We Know About

Fleishman Is in Trouble Episodes 1 & 2: Recap & Ending Explained - Where is Rachel Fleishman?