Pebbles (2021) Review: Films tend to do a lot these days- to convey setting, tone, and character. More often than not, it becomes assimilation of these factors that provide the narrative a certain amount of balance. P.S. Vinothraj’s Koozhangal bares itself out of all these considerations- demystifying the setting as well as the characters by just letting them be. They need no introduction- or entry point to navigate. Unfolding within a time span of a day, Koozhangal places its audience directly into the topography- and trusts them enough to stay. It blazes into the screen and stays disarmingly quiet- unfolding under a landscape tempered by heat and abuse.

The semi-arid landscape in which Vinothraj unfolds Koozhangal bears no respite. We meet Ganapathy (Karuthadaiyan), a drunk and abusive man whose rage does not spare his young son Velu (Chella Pandi). He takes him out of school (the only place where his presence is still meaningful- established by a single shot of him simply looking up at his father) to make him bring his mother back from her village. Not out of any affection- he simply needs her around to take care of his home and children. They wait for the bus, father and soon looking at either side of the road. No word is wasted to imply whether Velu likes his father or not.

We never get to see his mother- it’s not even necessary. Vinothraj establishes an every-woman figure on the bus- as Ganapathy strikes up a fight with another fellow. She carries her newborn in her lap, who wakes up in the commotion- and suddenly the men’s voices give way to the fervent cries of the baby. She eventually gets off the bus, just as his wife must have got rid of him in the past, and finds a shade under the tree. That’s the only place, away from the presence and influence of men for her to rest for a while in total silence.

Koozhangal devotes immensely to these silences- where a lot happens without using a word. The camera cuts through widescreen frames and follows the characters as they navigate their ways in the landlocked terrains- the heat burning the flesh alive. Yet, it is the rage and anger that emanate from these men that threatens the terrestrial heat. Vinothraj masterfully unravels this crossroads between patriarchy and poverty with visual storytelling- each shot perceived as a result of its own being. 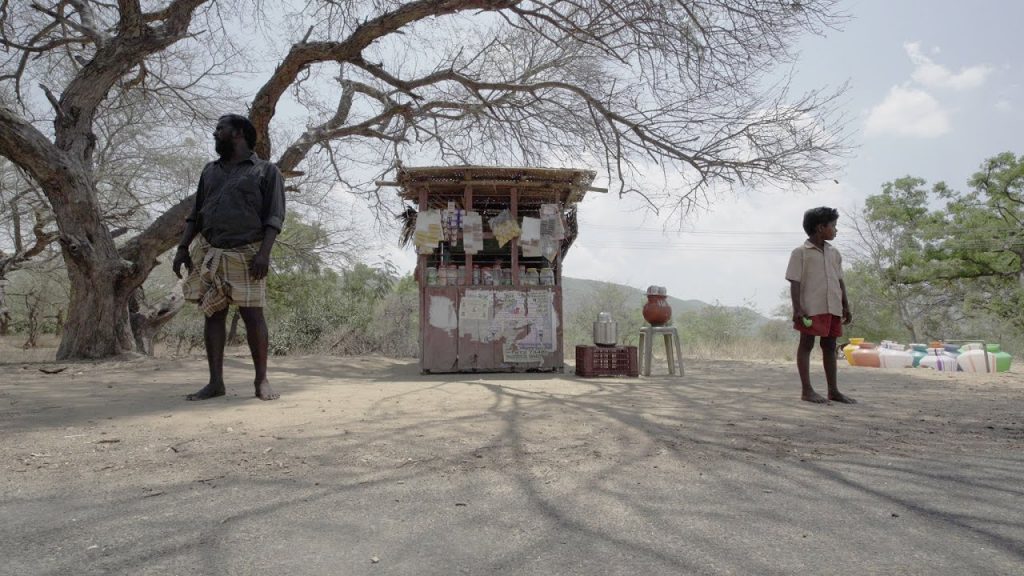 For instance, take the way Koozhangal establishes the clear contrast in power structure between man and woman. The men either play cards or get drunk, the women take care of the house, walk miles for fetching water, and prepare the food. Not a single word is required to register this- the short scenes are enough. The film also earns its title as a reference to the pebble Velu puts into his mouth to survive the stretch without water- underlying the ways in which another generation prepares to follow the footsteps couched in bitter resilience.

Even when it is relentless in its gripping portrayal of poverty and helplessness, Koozhangal never surrenders to any sort of sentimentality. The details that are provided about Ganapathy are minuscule, but they are enough to chalk out a man whose alcoholism is rooted, perhaps, in his failure to find a way out. Karuthadaiyan is extremely effective in the shimmering bursts of rage and anger. Vinothraj also strikes gold with Chella Pandi, so effective as the child whose silence and defiance powers way more than words can do.

Koozhangal is brilliantly shot by Vignesh Kumulai and Parthib, who tell the story by positioning the rage of the characters in the rage of the land- there’s a sense of despair front lining their existence. The composition- a symphony of static shots of houses, trees, and people- establish the setting of the village that is key to realizing the world mired in a toxic relationship with the land. Presented by Nayanthara and Vignesh Shivan, this is cinema stripped down to its bare bones, unafraid to show rather than tell.

By the time Koozhangal reaches its finale, in the brisk runtime of 75 minutes, we the audience- know enough about these characters and their livelihoods. The restrained, understated elegance that Koozhangal manages to achieve is a thing of rare beauty. In his directorial debut, Vinothraj has conjured up a rough-edged diamond of a film- whose anger and resilience accumulates into a silent, overpowering storm.