How to review a film like Appathava Aattaya Pottutanga? A film that is seemingly made in the hope of driving a point across. Do we dissect the message, examine the values in the point, which the film is trying to propagate? Or should we only concentrate on the merits and fallacies of filmmaking? In such cases, the prudent step is to examine the film, or any work of art of such nature, sans the message it is exuberating. Leni Riefenstahl’s Nazi propaganda film ‘Triumph of Will’, or D.W.Griffith’s ‘The Birth of a Nation’ are examples of cinematic brilliance despite containing morally reprehensible messages.

However, digressing towards Art vs Morality might not be necessary while talking about Appathava Aattaya Pottutanga. For this film is definitely no piece of art, regardless of one’s opinion on its socio-political message. ‘Appathava Aattaya Pottutanga’, in literal translation, means ‘Grandma is missing.’ What the film tries to address is the apathy and negligence of children towards their parents, especially when parents are at their twilight age. This particular Indian subcontinental social issue has been a favorite topic for many Indian films and countless television soaps, to elicit exaggerated emotions in the audience. The result has almost never been good, churning out highly melodramatic tearjerkers with minimal cinematic value, like ‘Baghban’. ‘Appathava.. .’ also tries to do the same, but it cannot even reach the bar, which was substantially low for this kind of film, to begin with.

The film starts with Meenakshi, the eponymous grandma, eloping with Ramaswamy, whom she met in the old-age home. This becomes a harbinger of societal embarrassment and trauma for Meenakshi’s son’s family. Some of Ramaswamy’s old college buddies, tormented by their own children as well, also decides to help the eloping couple. It had a certain understated ‘Mere Baap Pehle Aap’ meeting ‘Last Vegas’ or ‘Shaukeens’ vibe at the beginning. But, that vibe, which was making the film mildly interesting till that point, quickly evaporates into thin air. 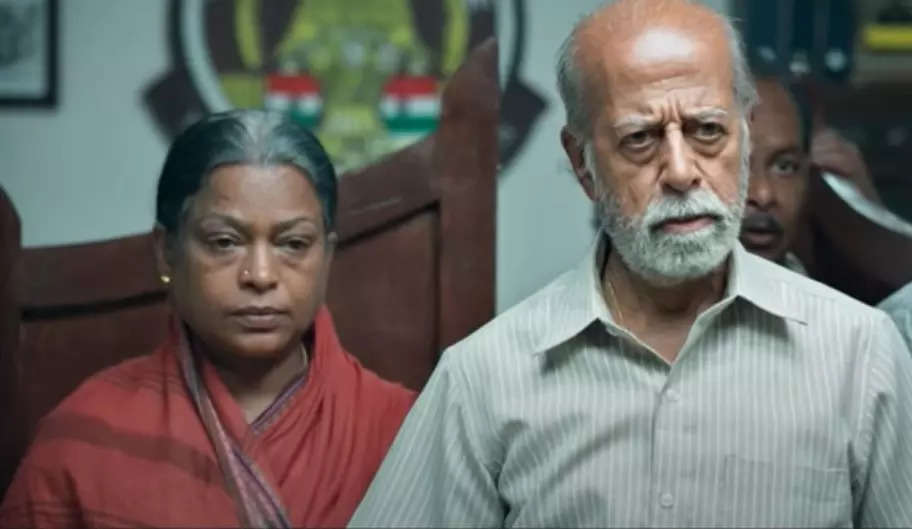 Films, with a social message to deliver, always run the risk of overindulgence. ‘Appathava.. .’ also commits to the same folly, and the way it does is both quite unique and ludicrous. The story often chose exaggerated stunts, involving the children of the supporting elderly characters downright abusing their parents, with the intention of generating comedic relief. It also chose the immediate moment after such ‘comedic’ escapades to produce a seemingly evocative rant about filial duties and responsibilities.

Such jumps between tones of each moment are numerous in Appathava Aattaya Pottutanga. Seemingly at random at that. Director N. Stephen Rangaraj seems to be in two minds, in terms of issues to address. At first, it did seem that the film was moving towards taking up on love at an extremely mature age; and the stigma associated with such marriages in Indian society. In hindsight, perhaps it would have been better to concentrate on that only. But, as the film progresses, it moves more towards the zone of filial irresponsibility, the ‘Baghban’ route so to speak.

Add to that, it is not only the issues that director Rangaraj seemed to be torn in between. It also looks like he could not commit to one single genre either. ‘Appathava.. .’ starts as a comedy, swerves towards heavy melodrama, and dabbles, for a bit, in heist movies. These shifts are done frequently, back and forth at rapid intervals, occasionally even at the same shot. At one point, the audience would not know which emotion the scene in front of them is supposed to elicit. It becomes a perplexing watch.

Technically, genuine efforts can be observed. The actors do try their best, the cinematography and editing are decent; all on par with usual mainstream films. There are also quite a few funny one-liners and moments constructed, however, the timing of them is horribly wrong. Moments like that would assure that the film probably would have been a much better affair if director Rangaraj simply committed to make it a fully-fledged comedy. Instead, we are left with an overblown, muddled mess that tries too hard to preach a done to death sermon.

The Manor [2021] Review : Barbara Hershey's lead performance is not enough to save this hurried entry into Welcome to the Blumhouse series