Sister Tempest (2020): A Sumptuous, Overwhelming Feast For The Senses: Consider a pastiche of Star Trek, Rocky Horror, and a subtle dose of Luis Buñuel- and yet you will have to think of a certain genre or framework to fit Sister Tempest. In his follow up to The God Inside my Ear, director Joe Badon has created a film that unapologetically does away with any singular genre, and readily combines everything from body horror to surrealism to science fiction to challenge and interrogate the very form it works upon. From the moment the multiple prologues begin with all their deliberate sanity, the tempo is quite set for what is to come.

Sister Tempest, at its heart, revolves around Anne Hutchinson (Kali Russell) who takes care and raises her younger sister Karen (Holly Bonney) like a mother figure. When Karen mysteriously disappears (watch out for the prologue), Anne’s life begins to fall apart.

Eventually, she meets a young student named Ginger Breadman (Linnea Gregg), at an all-girls art school and forms a deep connection with her. Ginger’s relationship with Anne starts to reflect the relationship with her missing sister Karen, memories of whom torment her everywhere.

But you won’t be looking for a plot in Sister Tempest (2020) when the attention is rarely invested in it. Biden takes care of creating a universe so hallucinatory and psychedelic that the attention rests solely on the visual and aural landscape of the story. Even when the focus is on Anne, whose fragile mental state uncharacteristically falls apart, Badon does not ask why but takes us through the shifts within her space of mind, of how one can only imagine the possibilities of such an internal working. It is unsettling at times, and blissfully horrifying to witness how the structure of the narrative molds without holding anything back. 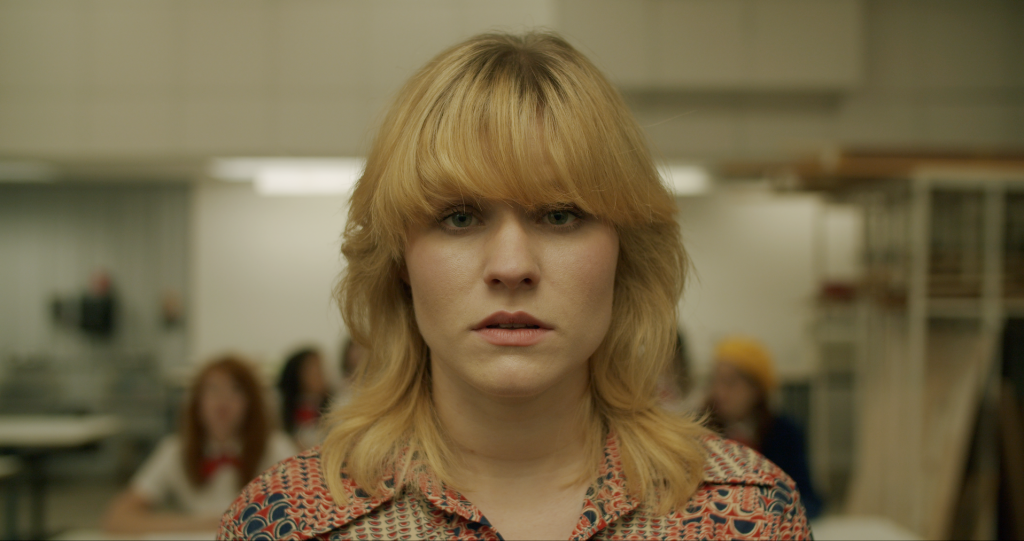 Notice for instance how the narrative is divided into chapters that fragment every change in space and memory. The screenplay co-written by Badon and Jason Kruppa references to 1950s cult classics like The Day the Earth Stood Still and The War of the Worlds to a kaiju film like Godzilla. The characters in Anne’s daily life manifest themselves as pop culture representations from the world of cinema and visual art. At times it even feels like a progression through a live-action manga of sorts, with characters shadowing anime in full authenticity. Even the sound design, is blazingly electric.

It has to be noted here how Badon is also a musician and visual artist himself, and so this deliberate conglomeration of styles and genres never feel out of place, although it might all be exhaustive at times. The nonlinearity in the scenes becomes slightly jarrish towards the latter half of Sister Tempest (2020), and one wonders where else can the continuous tonal shift lead to.

The performances hold the madness together. Russell and Gregg are fine together, taking agency of every fantasmatic shift with grit and poise. The use of miniature set-designs is masterfully crafted and realized, but any more details about them will be no less than a spoiler. The sound design in particular tends to overwhelm at certain points, with eye-popping costumes accompanying them. The effect is a restless, slightly feverish chain of events so overwhelming in its execution that it challenges the senses to catch hold of it at certain points.

Badon’s creation is a starkly original and sumptuous visual treat of a film. Sister Tempest (2020) means to overwhelm the senses and does so, successfully. Perhaps a little control over the shifts and molds could have made a more poignant impact. But make no mistake to search for logic in this original, brave, and nightmarish feast of an experience. Watch it unprepared and be sure to be blown away.