Home»Reviews»Films This Week»Loktak Lairembee [2016] MUBI Review – A Poignant, Poetic Tale from the Floating Islands in Loktak Lake
Films This Week/MUBI/Reviews

There is a war raging in Manipur between the ‘self-sufficient’ islanders, mainly a fishing population, living on the phumdis in Loktak Lake, and the state machinery. We are introduced to this conflict right at the start of Haobam Paban Kumar’s National Award-winning film on Environment/Conservation/Preservation, Loktak Lairembee, or The Lady of the Lake, as we see fumes from a burning, demolished hut rise into the air while a fisherman silently watches the hungry flames from his boat poised at a distance on the waters of the lake. We are quietly led into the life of this fisherman, now that he has settled on another phumdi further south in the lake.

The director, Paban Kumar’s camera glides along the water, observes the fisherman’s family from a distance and introduces its audience to the small, poor fishing community as it struggles to survive against state-sponsored modes of violence. Loktak Lairembee slowly draws its audience into the lifestyle and the beliefs of this small community, while making it completely clear that sooner or later the war will catch up with them and, inevitably, find them on the losing side.

A large section of this film focuses on the daily routines of the people in this community. From a particularly intriguing scene where the community gathers to prepare the ground for laying down a hut on the phumdi to scenes involving the fisherman and his wife going about their lives – eating, sleeping, bathing, and filling their drinking water pots.

It becomes increasingly clear to us that the lifestyle of these people is intricately linked to the biosphere of the lake. This makes it easy for us to catch up on some casual laughter when, in one of the scenes, a fisherman proposes the idea to break either the radio or the radio station because the government has been campaigning for self-sufficiency among the people on the radio, but they already were a self-sufficient community. However, when the same sentiment is expressed through a slow-burning, emotional upheaval among the women, the more-hardworking members of this community, we might find ourselves jolted by their passion to “fight and die” for the Loktak Lake. 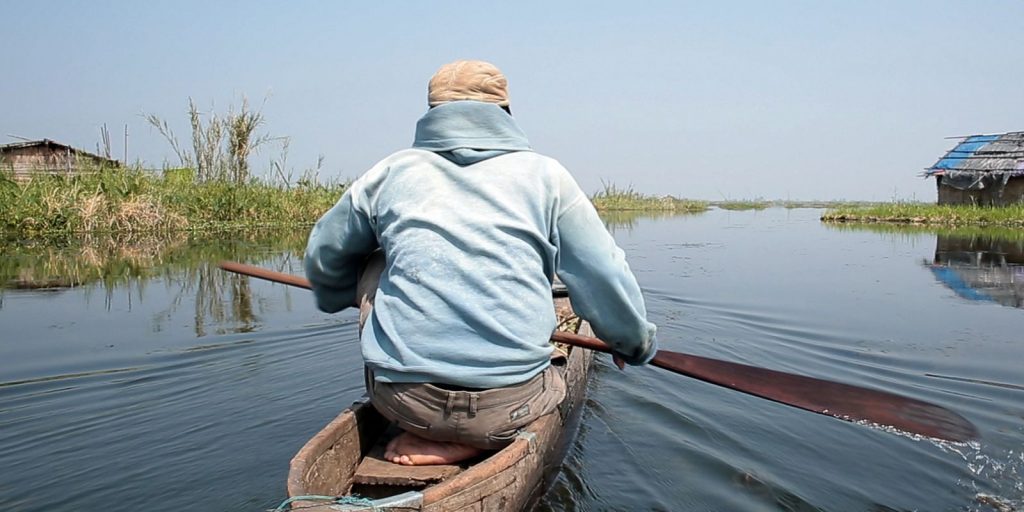 Paban Kumar brings us closer to this community by introducing us to the ideas around the Goddess of the Loktak Lake, the one who the locals believe has kept their community thriving for years now, but very strategically leaves us fumbling in the air of mystery around her. The legend transforms itself into a human figure by the end of the film and the audience is hinted at the process of myth-making or urban legend that her presence might give rise to. In that, the film becomes a morality tale.

A fisherman, dejected with life and threatened by the surmounting pressure of the government to abandon the islands, secures a gun to save their souls and finds his confidence converting itself into arrogance until one fateful night when he encounters the lady of the lake.

The gun is a symbol of violence yielded by the state against this community and a phallic symbol of masculinity in this tale. It empowers the otherwise inactive and afraid fisherman to lash out against his wife with snide comments such as “…this is not a thing for you women” when she asks him to discard the gun for his good. The gun constantly throbs with the potential of violence and keeps the fisherman awake at night, tempting him with the possibilities of power. Does the fate of the gun hint at the non-negotiable nature of this war between the state and the fishing community? I think the audience will not find it difficult to answer this question by the end of the film.

There is tension in the air around this community. While ‘Loktak Lairembee’ is rapt in the sounds of nature, or the lack of it, we still sense the throbbing pulse of a possibility of violence in the air. In fact, the best metaphor for this violence is a long, rolling shot that allows the audience to look at the surface of the Loktak Lake from a very close distance, allowing us to discern the plants that lie immediately below the water level, sometimes even peeping out on the surface.

The struggle put up by this community is rooted in the same old battle between ecologically sustainable ways of life and modernity, the same that erupted between the native tribes, environmentalists, and farmers and the government around the Narmada river valley in Madhya Pradesh in the 1990s. Hope mostly lingers at the periphery, here. The audience knows that the state, with its gigantic Watermaster looking like a mechanically operated beast and ready to fell the huts, shall become the winner once the battle breaks out. The audience can only watch the ravages of the war from a distance and lament about the same, the first scene of the film, then, forebodies the audience’s reaction.

Winner of the German Star of India at the 14th Indian Film Festival of Stuttgart, Germany; nominated for the Cultural Diversity Award under the patronage of UNESCO at the Asia Pacific Screen Awards, 2017; and screened at several international and national film festivals, including the International Film Festivals at Hong Kong, Berlin, and Busan, this uniquely poetic film is available to stream on MUBI India.

Loktak Lairembee (Lady of the Lake) is now streaming on MUBI