Home»Reviews»Films This Week»The Manor [2021] Review : Barbara Hershey’s lead performance is not enough to save this hurried entry into Welcome to the Blumhouse series
Films This Week/Prime Video/Reviews

Written and directed by Axelle Carolyn, The Manor (2021), which marks its entry into Amazon’s Welcome to the Blumhouse series, begins with Barbara Hershey as Judith, whose 70th birthday celebration with close friends and family turns from smiles to a sudden fixture that paralyzes her completely. She falls flat on the ground and the screen fades to white amidst the muffled concerns. (One can’t help but recollect Black Swan in a parallel universe, as Hershey played Natalie Portman’s mother there with such solid impact.) But here, just this one scene is enough hint to understand what is to follow for our protagonist, offering an exposition that falls flat just like her.

In the next scene, she is planted to a high facility retirement home, where Judith’s access to her mobile, and simultaneously her Instagram updates, as she mentions, is taken away. It was in the contract, which to no surprise, she didn’t notice while signing. A former ballet dancer, she opens up to her fellow inmates quickly. “I don’t want my family to see me like that,” she explains, stating how close she is with her grandson Josh (Nicholas Alexander). Although this has created tensions between Judith and her daughter Barbara (Katie Amanda Keane) that will come to light in its own accord.

Related to The Manor – Madres [2021] Review: A Half-baked Political Horror Film that Misses more than it Hits

Yet, Judith slowly unravels, losing her agency day by day in the house as she witnesses monstrous shadows lurking in her room. Her trio of friends- Ruth (Fran Bennett), Trish (Jill Larson), and the inertly annoying Roland (Bruce Davison), exist merely to smile and grin and offer little support. Gaslighted even by the nurses, where Judith is quick to snap back when offered a sleeping pill that they are drugging everyone, the action unfolds with a wavering pace. 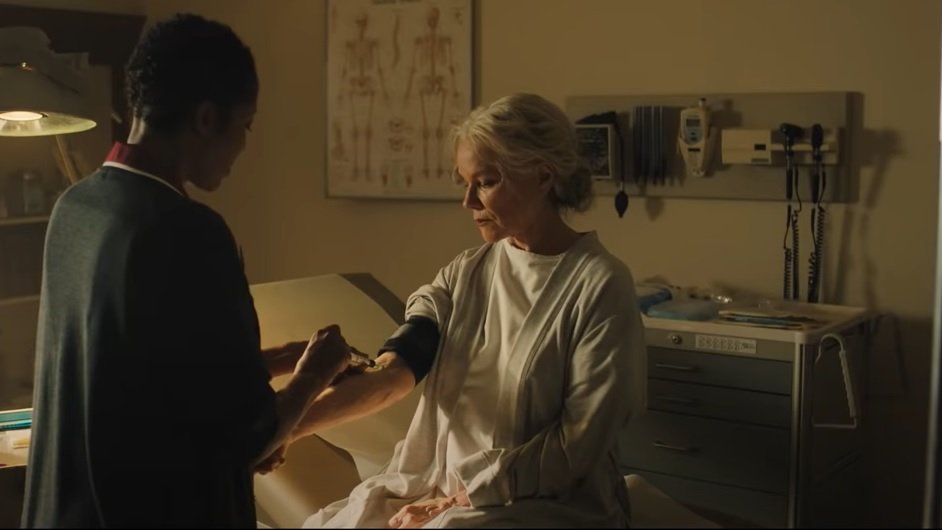 She observes the rough treatment of her frail roommate Annette (Nancy Linehan Charles) who seems crushed both physically and mentally. Judith notices that a number of the housed residents suffer from regular nocturnal terrors, which then extends to herself as she gets the unshakeable scare on observing a type of black creature sliding over Annette’s bed. She’s enraged when the nurses elbow her to believe that she must have been having a nightmare. Although there are hallucinations that she cannot fully ignore. Still, Judith remains keen on getting to the root of it. She uncovers more such signs that tell her that something is not right here. Soon enough, she’s diagnosed as suffering from dementia.

Similarities with One Flew Over The Cuckoo’s Nest is plausible, but without any iota of suspense in the proceedings. Most of the supporting characters in Carolyn’s words exist as stock figures that pop up whenever but not when required. Even the pace through which The Manor proceeds from one scene to the next feels half-baked and stretched, given that so much is already predictable from the get-go. The jump-scares are a major turn-off and come off as overdone. The tease of gothic horror never comes alive, as the house within which most of the action takes place closes itself to the same interior scenes without giving a rounded exposition. One wonders how atmospheric the interiors, given the fine production design by Tracy Dishman, could have been, if not for the somewhat inconsistent camerawork by Andres Sanchez that follows the characters. Judith’s crisis is predictable from a mile, and yet The Manor oscillates towards a wholly uneven track of over-explication that makes the brisk runtime feel long.

Hershey tries hard, and her starring role is quite a welcoming register, yet she is unable to project the intensity that is required to follow her through the crisis. The problem mostly lies in the manner in which she is made to mouth dialogues that feel planted with an obviousness making it jarring at several points. One can’t help but miss the Hershey of A World Apart and The Entity. Although the ending tries to grab to an unexpected threshold, Carolyn remains hurried in the compulsion to deliver the unpredictable, although the build-up to that point never felt the need to consider the threads. In the Welcome to the Blumhouse series, The Manor is at best a handsomely mounted premise that never quite rests on its own power. It ultimately disappoints as a genre piece, unable to bring any edge to the horror.

The Manor (2021) is now streaming on Prime Video