UK-born film-maker John Boorman’s American debut Point Blank (1967) is one of my most favorite noir cinema made long after the official end of the film-noir era. In fact, Point Blank exemplifies the dawn of the new American cinema, alongside the subversive works like Bonnie and Clyde and The Graduate (released in the same year). Dubbed as ‘Europeanized’ American cinema, these provocative studio films of the era were immensely influenced by the formal innovations of French New Wave and other unconventional avant-garde stylistics. Despite glowing praises heaped upon Point Blank, its plot is anything but lean and simple, which in the hands of a lesser film-maker would come across as just another bad Hollywood action/drama. Based on Richard Stark’s slim novel The Hunter, the narrative is centered an around a middle-aged man named Walker (phenomenally played by Lee Marvin with white hair and dead-set eyes), who after participating in a heist, is double-crossed, shot, and left to die.

Of course, Walker survives and seeks his betrayer, the best-friend-turned-enemy, Mal Reese (John Vernon). Guided by a mysterious old man named Yost (Keenan Wynn), Walker works his way into the mob enterprise, simply known as ‘The Organization’, to retrieve his share of the heist, i.e., $93,000. It is interesting to note that the straight-faced Walker doesn’t want vengeance, but just his money. To track down Mal, Walker first sneaks up on his wife Lynn (Sharon Acker). She has had an affair with Mal and reluctantly participated in the double-crossing scheme. Walker goes to great lengths to locate Mal and extract money, which includes sending Lynn’s sister, Chris (Angie Dickinson) as a ‘Trojan Horse’, the girl whom Mal covets for. As far as the story-line is concerned, that’s just it. But the pleasures of watching  Point Blank rests in the way Boorman constructs this amoral, nihilistic universe, where the uber-cool exteriors of the affluent capitalist society couldn’t always masquerade the individuals’ existential malaise. Adorned with explosive colors, recalling Euro-art cinema, Boorman unravels the pointlessness of the scheme, carried out by a man who is neither dead nor actually living. 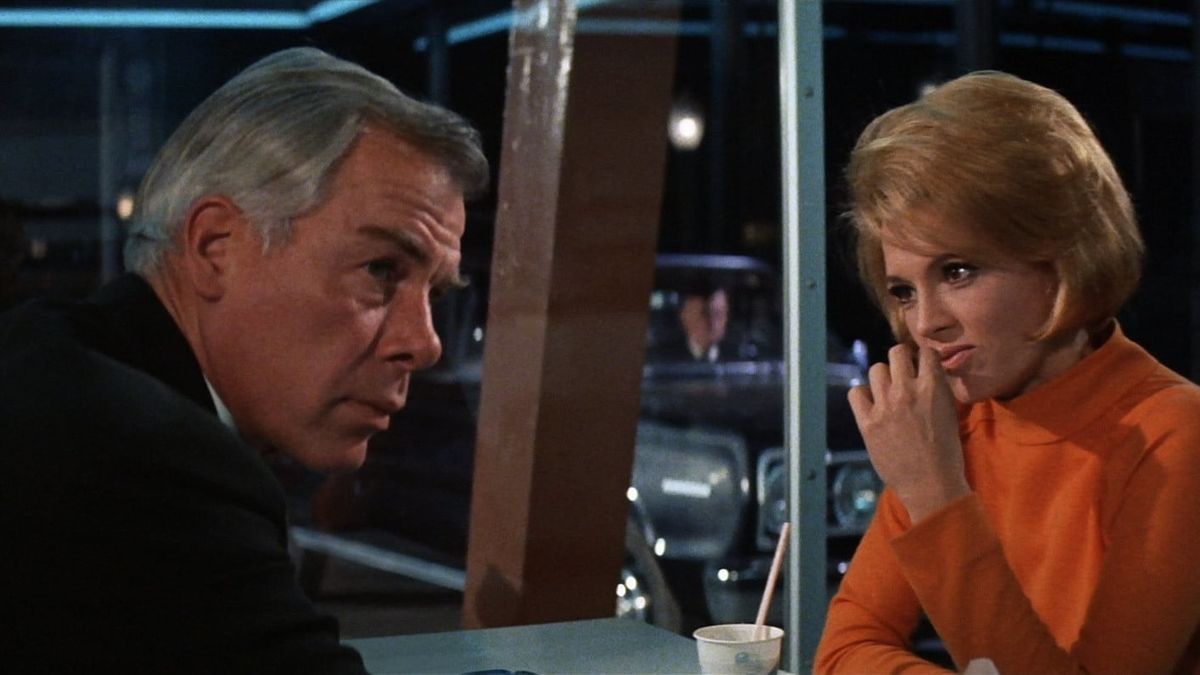 The first fifteen minutes of Point Blank is replete with visual innovation that abandons the closed-form story-telling in favor of lyrical, dreamlike expressions. Boorman forgoes linear logic by often freely intertwining sounds, images, and dialogues from the near-past. The opening scene where Walker recalls the string of events that lead to him being gunned down inside a prison cell of the deserted Alcatraz or the extended sound of Walker’s footsteps in a corridor juxtaposed with the never-ending reflection in a mirror, sort of reflects the fragmented mindset of the traumatized hero.

The disparate arrangement of visuals and sounds are clearly Walker’s intrusive fragments of memory that keeps him on the elliptical path of violence and dispassion. It somehow works on the viewers at a subliminal level. For instance, when Mal is trapped by Walker he appeals to his old friend to trust him, which suddenly brings up Walker’s memory of last time Mal made a similar request. The visual mood is flushed with these repetitions, deja vu moments, and echoes of the subconscious. Such methods of entwining the protagonist’s subconscious into the narrative were later used in Steven Soderbergh’s The Limey (1999) and in Lynn Ramsay’s You Were Never Really Here (2017), both about the single-minded mission of the traumatized yet invincible men.

The extraordinary quotient of Point Blank lies in its digressions and its unnerving tone of discontinuity. Although the film maintains the classic film-noir mood of bleak fatalism, the sinister shadows and darkness are replaced here with the sunny, sterile corporatescape of L.A. There’s a joy in watching our powerless, adrift protagonist taking on these suited, powerful corporate-types, snugly positioned inside the colossal buildings. As the narrative progresses, the familiar double-crossing ‘friend’ is replaced by different entities of a nefarious, faceless ‘organization’. They are not simple-minded crooks, for whom $93,000 isn’t much money. At the same time, the multiple-heads of conglomerate monster exists for the sake of increasing profit that they can’t actually give away the money. This paradox is as comically absurd as Walker’s quest.

Even though impassivity and alienation of Walker is diffused throughout the narrative, Point Blank doesn’t shy away from wickedly sexy interludes. As in film-noir, the female characters are sexualized, but their existential torpor is briefly touched upon. Angie Dickinson’s Chris’ status as the object of male desire is duly exploited by Walker. But in a later scene that’s a detour from the central narrative, Chris takes out her frustration and despair on Walker, who doesn’t lose his detached composure throughout her tantrum. And unlike a typical noir hero, Walker isn’t enraged by his wife’s adultery, probably because the sleepless blonde-beauty hoarding perfumes only evokes sympathy.

Point Blank continues to remain a daring formal exercise and director John Boorman’s best film (‘Deliverance’ and ‘Hope and Glory’ were his other prominent works). Before this, Boorman has made only one in feature-film in the UK (‘Catch Us If You Can’), which clearly didn’t make critics anticipate such a breathtaking treatment of a genre movie. What’s further interesting about Boorman’s direction is his decision to strip down the flabby, predictable parts of the narrative (for instance, the scene Lynn’s corpse disappears or when Walker holds a couple of apartment-dwellers hostage to create a distraction).

Apart from the supreme style, Lee Marvin’s performance of the aloof anti-hero is a great talking point. The pensive and haunted looks carried by the actor allows anchoring the emotional elements without which the visual exercises would have tapered off. Marvin moves (and even fades) like a ghost that allowed room for some fascinating interpretations. One says Walker never left Alcatraz after getting shot and that the whole events represent his dying thoughts (“You died at Alcatraz all right”, snarls Chris although she doesn’t mean it in a literal way).  Eventually, to get a better understanding of Point Blank’s heralded merits, one needs to watch Mel Gibson starrer Payback (1999), the insipid adaptation of the same Richard Stark novel.

Adam [2019]: 'IFFI' Review- An Admirable Film about Living Within the Social Fringes