Ms. Marvel Season 1 Episode 1 Recap & Ending Explained: Ms. Marvel, the second Disney Plus series of the year 2022 has arrived now. The series works as an introduction to Kamala Khan (played by Iman Vellani), a Pakistani American teenager with Superheroic abilities. The character will be seen in the upcoming The Marvels movie along with Carol Danvers/Captain Marvel (played by Brie Larson who was last seen in Avengers Endgame) and Monica Rambeau (played by Teyonnah Parris whose special abilities were introduced in Wandavision last year). The show is created by Bisha K. Ali, a British-Pakistani screenwriter which only indicates how serious Marvel has become about the representation of culture instead of whitewashing it.

Marvel Phase-IV has been the most audacious and experimental MCU phase so far. The result of which has been mixed. But in the Disney Plus Web series territory, things have mostly worked out. “Wandavision” (2021) was a genuinely audacious experiment that pretty much set up Dr. Strange in the Multiverse of Madness (2022) movie.

Falcon and Winter Soldier (2021) explored the fan-favorite characters Bucky Barnes and Sam Wilson while trying to look at a post-Avengers Endgame world from a new political perspective.  Loki (2021), the biggest one so far dived further into the multiverse and alternative timelines in the universe which was complemented soon after by What If? (2021). Hawkeye (2021) was lowkey but introduced an instantly likable character of Kate Bishop and also worked very well as a Christmas-themed adventure that focused on passing the baton.Three months after that, Moonknight of course became a phenomenon thanks to a fantastic Oscar Isaac, an authentic representation of Egyptian culture, and an absolutely different never seen before side of MCU.

The usual MCU intro music is replaced by Blinding Lights (The Weekend) and Moonknight has made it to the intro section now. Right after that Kamala Khan starts to narrate and establishes herself as the biggest Captain Marvel/Avengers fan in less than a minute.In the post “blip” world, Kamala runs a Youtube channel and her content is all about the earth’s mightiest heroes. We get to know about “AvengerCon”, a comic con-like event happening for the first time in New Jersey and Kamala is planning to cosplay as Captain Marvel.

Soon we are introduced to Kamala’s parents Muneeba and Yusuf, who seem like regular Pakistani/Indian parents, and her elder brother Aamir whose wedding is right around the corner. Kamala takes a driving test and poorly fails after severely damaging the car of the driving instructor, and her dream of attending “AvengerCon” under the pretext of running errands for her brother’s wedding are temporarily shattered.

The story takes us to Kamala’s school and we get to meet Bruno Carrelli (a major character from the comics, played by Matt Lintz), Kamala’s best friend, and some regular teenage bullies (one of them is Zoe Zimmer, another character from the comics) but none too affecting. School counselor Gabe calls Kamala to his office and sits down with her to talk about figuring out life and the future where we get to know that things haven’t been going great for her in recent times, mostly due to being occupied with the fantasies inside her head.Bruno later suggests Kamala to request her mother to give her permission to go to AvengerCon and she brushes him off completely. Meanwhile, Muneeba receives a box of stuff from her mother and Kamala gets all excited about the stuff inside where she notices a large bangle. However, her mother snatches it from her right away and orders her not to do anything with the box because it was junk.

While Bruno sets up an Alexa-like system developed by him at Kamala’s house with an elated Yusuf, Muneeba takes her to run errands with her. Laced with Ahmed Rushdi’s iconic Ko Ko Koreena song, the scene quickly moves to the neighborhood and we are introduced to Najaf (played by Azhar Usman), a halal food vendor known to the Khan’s and then to a clothing shop where Muneeba runs into an acquaintance – a woman of her age who whines about her daughter going to a backpacking trip in Europe and getting “close” to a “gora” boy. Kamala hears this and says that it is actually good for the daughter before meeting with a snarky response from both her mother and the woman.

At home, she finally gathers the courage and directly asks her parents if she can go to AvengerCon with Bruno to which her mother, as expected seems skeptical. When she mentions that she is going to wear a Captain Marvel costume Muneeba gets madder because she finds that costume “tight” (basically derogatory and insulting). Kamala gets frustrated and starts to rant about how she has no freedom in comparison to her brother who has all the freedom in the world; then storms out of the room immediately. Late at night, Aamir tries to console Kamala about this and promises her that he will try to convince their mother about the AvengerCon.

The next morning, to Kamala’s surprise her mother gives her permission to go to AvengerCon but also hangs a special condition which is to wear a green salwar kameez to dress as Hulk and go with her father who storms into the room (badly) cosplaying as Hulk. Muneeba further suggests that they go as “big Hulk, little Hulk”. Kamala cringes at this and gets further upset which makes her father sad and her mother revokes the permission again.

Bruno meets a heartbroken Kamala and tries to cheer her up by telling her how amazing she is and how eventually the parents will come around. He also gives her a glove designed by him which lights up (just like how Captain Marvel’s hand lights up while throwing energy blasts) and they start mock fighting on the rooftop. 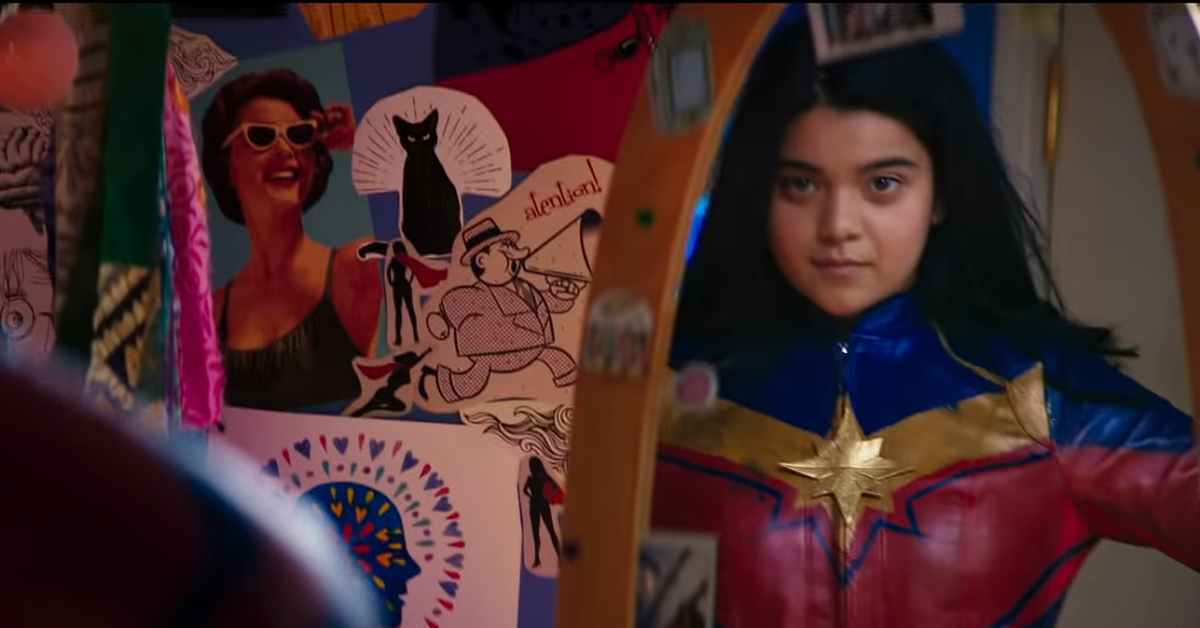 Kamala eventually comes up with a plan of sneaking out of her house with the help of Bruno’s security system masquerading her every time her father tries to enter her room. The plan seems way over the top and much more difficult to execute but they still decide to go ahead with it mainly because of her extreme desire to go to the event. Upon Bruno’s suggestion, Kamala steals the bangle from that box as the cosplaying competition needs each contestant to bring something of their own which represents their culture.

Kamala and Bruno set out for the AvengerCon but nothing goes as per the plan. However, they still manage to reach Camp Leigh (a callback to the first Captain America movie) which is the event venue. They are surprised to find Zoe there who is also doing a Captain Marvel costume. Kamala gets really annoyed as Zoey is not even an Avengers fan but Bruno asks her to ignore it. Kamala and Bruno end up having a lot of fun and finally, Captain Marvel cosplaying competition is about to start.

But right before the competition, Kamala forgets her gloves in the bathroom. Bruno asks her to get up to the stage anyway as there is no time to go back and bring the gloves. Kamala wears the bangle in her hand and right after wearing it she feels a sensation around her whole body and we see a blue sparkle around her. She also finds herself transformed in a place with lots of shadowy figures with blue light all around for a split second. With all the flashing lights and everything around, Kamala somehow throws a blue energy blast and several more energy blasts after that. She is obviously surprised but the judges and everyone else think she is doing that on purpose and they are amazed.

One of her energy blasts hit a big antman statue and the head of it falls down creating a series of unfortunate mishaps that happen in no time and things become extremely chaotic where Zoey gets hit by a display of Mjolnir (Thor’s hammer). Just before Zoey falls to the ground, Kamala somehow elongates her hand with the same blue sparkle all around it and manages to save her. Bruno and Kamala leave the scene, and on the way back Kamala tells him maybe she has a superpower while Bruno is perplexed and amazed. He promises not to tell anyone.

Kamala enters her room, much later than when she was supposed to as per the plan and finds her mother there. Muneeba expresses her disappointment at this rebellious act of Kamala and asks her to drop all the obsession over some fantasy and focus on her life, study and family. After she leaves Kamala looks at the bangle in her hand and another blue light sparkles around it.

In a post-credits scene, we see a woman showing a man a video of Kamala from the AvengerCon and the man asks her to bring her in.

Let us talk about the post-credit scene first which is a clear tie-up to the Spiderman films (Homecoming and No Way Home) where the same people appear as Damage Control employees. The man (Played by Arian Moyaed) was last seen interviewing Peter Parker, Ned Leeds, and MJ.

The show also acknowledges Kamala’s power – the ability to elongate her hands, staying true to the comics. It is also evident that the origin of her power is the bangle which might be associated with the Ten rings, or the tesseract (a huge deal in the MCU), or even some Skrull object.In the comics, Kamala is inhuman but so far in this universe, Marvel has not acknowledged them (apart from a version of Black Bolt appearing in The Doctor Strange movie) so the origin of power might be a different story here. Or, this show might just be a proper introduction to the Inhumans. Considering how much Comic accurate it has been, that actually seems very likely.

We are also hoping to find out the backstory of the bangle and Kamala’s grandmother in upcoming episodes and see if that ties her up with Carol Danvers, her idol in any way. Given Kamala is supposed to appear in the upcoming The Marvels movie, there has to be a proper connection. Brie Larson appearing seems unlikely as of now, but a Nick Fury or any Secret Invasion (another upcoming Marvel show) character cameo might just be on the card.

We will surely be able to discuss furthermore after the next episodes.