Watch The End of the F***ing World: Season 2 on Netflix

“For fuck’s sake,” says Alyssa (Jessica Barden) as she opens the door of the car and sees her past. The very thing we hoped would not happen. The very thing we have gotten tired of seeing in many television shows which decide to progress ahead of their source material.

It was such a perfect ending but they did what we all dreaded. (this is not a spoiler. Maybe it is. He was listed in the cast. Perhaps it was expected that he would be in the flashbacks. F***. I’ve spoiled everything.)

The End of the F***ing World Season 2 is set across a span of 3 days and is quite unnecessary. Fans wanted to know what happened after the screen cut to black nearly 2 years ago. Some didn’t and felt that that ending was good. We got the second season. In Alyssa’s tone and words, “Fuck.”

This season focuses on Alyssa attempting to move on from the events of The End of the F***ing World Season 1, but she is pursued by her past and a threat in the form of someone who wants to take revenge on her. Like season 1 this season too has episodes in which you feel as though it has just begun before the end credits flash on the screen. 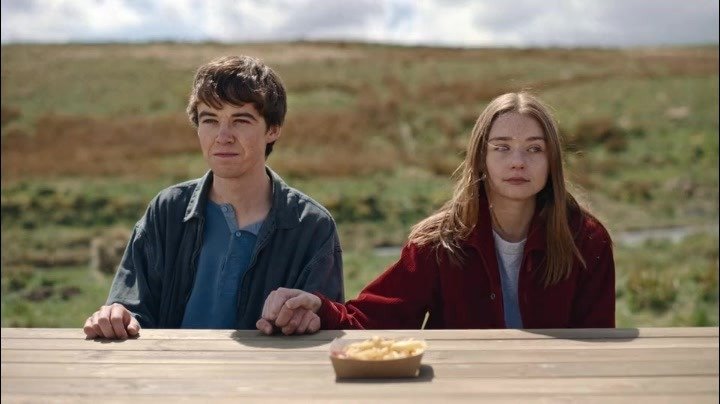 This season feels like an epilogue of an epilogue that has an epilogue that is a bland offering after the gripping 1st season from where minor things are picked up. We have a new character introduced to us in this shows the second offering. She gifts this modern-day Bonnie and Clyde duo bullets with their names on it. Ironically, her name is Bonnie (Naomi Ackie) and she has a score to settle with the two leads.

Bonnie is introduced in the 1st episode. The show gives us her complete backstory and gets us up to speed with the motivations of this character and the reason she is part of the show. It does so in the first episode itself which works wonders as we aren’t distracted with multiple flows disrupting flashbacks in each episode.

At first observing, she is exactly like Alyssa and has a very straightforward nature where she admits to her former classmate at a shop that she killed someone in a tone making it sound as nonchalant as though she was taking a stroll in the park. She is sinister and quite creepy and intimidating. However, she successfully manages to come across as a confused and blinded young person.

Similarly with that other character. They spend an episode on him too before deciding to pick up the story from the present only in the 3rd episode.

From here as we move on the flashbacks are limited purely for conveying emotional drives of characters rather than to help the audience to catch up on some forgotten backstory.

There is a message in the end which I feel was written into this show in the aftermath of the “Me Too” events. They built upon this from one single event in season 1. Good? Certainly? But once again in the words of the characters (they do seem to reflect exactly what I was thinking as I watched the show), it felt as though someone has taken their batteries out.

Little Things [Season 3] Netflix Review – An Important, Insightful examination of love and relationship in our times

Like Big Little Lies, I felt that this show too lacked that punch that it had in the 1st season. That could be attributed to us anticipating it as when it first came out we were stunned. Alyssa does have a typical Alyssa type of moment where she gives a very blunt reply. They reclaim their Season 1 mojo and just as I whispered to myself, “they’re back.” The same sentiment is echoed by the on-screen character.

In today’s times what would be appreciated is to see an acclaimed film or series being left as it is and not continuing with a showrunner deciding its direction. This doesn’t disappoint on the levels of a Game of Thrones or Big Little Lies but it tarnishes that first season.

Agreed that the characters need to be a bit more empathetic and evolve as they mature into adults, but maybe let that be up to the viewers’ interpretation. Yet another thing for the makers of Joker to look at and hopefully arrive at the conclusion that there is no need for a sequel. The End of the F***ing World Season 2 gets quite a high rating which only serves as proof about how much better than 1st season was.

The End of the F***ing World Season 2 Trailer