Spike Lee, the incredible director behind great films like Do the Right Thing (1989), Malcolm X (1992) and the more recent BlacKkKlansman (2018) is back with another joint, a Netflix-distributed story about four African-American Vietnam veterans returning many decades later to a location where they hid a treasure. Da 5 Bloods is exciting, memorable, very politically aware and it doesn’t shy away from explicitly declaring its many beautiful and vital messages. Even amidst Spike Lee’s large and impressive filmography, Da 5 Bloods immediately shines as one of his better and more important works. A film with a captivating story and an urgent message, shot marvelously, edited even more so, with a minimum of downsides that don’t even come close to ruining the overall experience, one that should definitely not be missed.

The film’s plot revolves around four American Vietnam veterans meeting in Ho Chi Minh City to revisit a location they’d been at decades prior with their late friend and comrade, Norman, a location where they hid a large amount of government-owned money that they vowed they would keep, as revenge for the many crimes committed by America towards black people. Many unwelcome parties enter the play and make the simple, impromptu plan that the five “Bloods” devised decades ago more complicated and dangerous, and later on, mortally so. Aside from the film’s main story, the film explores some of its characters’ backgrounds beautifully and seamlessly blends them with its plot for the most part. Da 5 Bloods is a very ambitious film in its scale, and its story tends to complicate itself with events that really serve no purpose and some questionable plot directions, but by the end of the film, the film has a firmer grasp on what it really wants to say, with an ending that jumps from fiction to reality, or hopes of a better one. 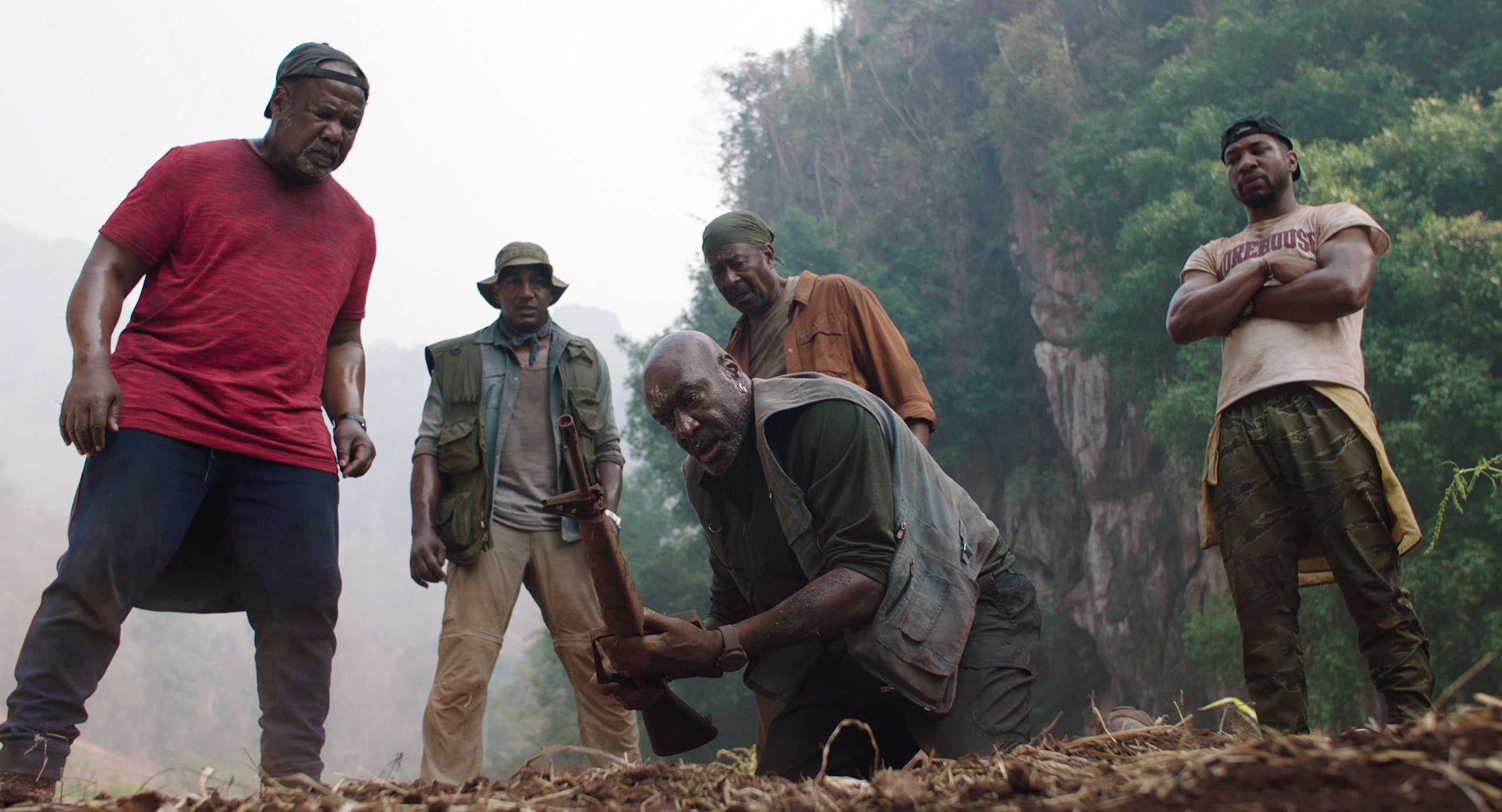 I stand and applaud the film for many things, whose combination almost nearly made this film a masterpiece. First of all, camerawork. Cinematographer Newton Thomas Sigel makes city life seem as vibrant as a dangerous adventure in the jungle, beautifully captures both scenes set in the present and in the past and seems to always make the right choice to convey exactly what the film needs to say at that particular point. For a story that gets grimmer and more serious as it progresses, the film’s cinematography never loses in its lively, vivid colors, but the camera just grows more piercing and intrusive, oftentimes finding itself at very close proximities to the characters, perfectly portraying the many emotions they feel and express throughout the film.

The film’s editing is its strongest feature and a major reason why Da 5 Bloods works so well. Blending footage of rallies, speeches and powerful moments from historical figures like Dr. Martin Luther King Jr., Malcolm X, and Muhammed Ali, actual footage of the many crimes committed in Vietnam and pictures of the many icons referenced in the film, scenes from the present which constitute the majority of the film, and ventures into the past in collective, pained memories, and personal, singular guilts. Constantly swapping from widescreen to the boxed frames for the scenes set in the past, the film portrays the many possibilities the present holds and the constrained, romanticized past.

Da 5 Bloods needed good actors and Spike Lee couldn’t have asked for a better cast. Incredible strong performances from everybody involved, especially the main characters, who manage to portray friendship, betrayal, longing, pain, and anger masterfully and make this story really come to life, but Delroy Lindo’s performance as Paul should automatically earn him a nomination for Best Lead. Incredibly emotional and driven, he captures both yearning and madness, anger and comradery, desperation, and resistance. A tour de force.

Spike Lee always makes films that are very aware of their message and Da 5 Bloods is no exception. This is a film to rewrite history, to give credit where credit is due, and to point fingers towards the truly guilty. Its beautifully urgent message is blended with a powerful, exciting story spawning decades that escalates and escalates throughout the fairly lengthy runtime of 2h35mins, perfectly balancing action and drama, violence and tenderness while never letting you forget why the film got made in the first place.