Being an immigrant itself has a certain amount of stigma attached to it. Whether it is for being an outsider or for not being able to find a sense of belonging, the person has to deal with the vices while adjusting to the new life that has been assigned to him. In ‘Complicity’, Kei Chakaura handles the topic of immigration with its central character departing from China to Japan in the search of a source of income. As it digs deeper, the film peels layers to the very feeling of being in that position where the thirst is for salvation more than the materialistic goals.

The protagonist of Complicity is a Chinese resident Cheng Liang (Lu Yulai), who has moved to Japan in the hope of returning home after a while. He’s doing the most to adjust with his life in Japan while trying to have an identity in order to find income. After buying a phone and an ID from the black market, he receives a call offering job in a rural restaurant. While being hesitant in the beginning, he eventually bluffs his way towards getting an apprenticeship in that small shop to make traditional Soba noodles under the hands of an elderly mentor, Hiroshi (Tatsuya Fuji) and his daughter.

Cheng Liang, who starts living by the name of Liu, is constantly under the burden of being spotted as a fraud. His vulnerable self starts working with a stern and somewhat authoritative Hiroshi. Over time, their bond grows much stronger where Cheng even starts calling him ‘father’. That might have to do with the lack of parental care that we get to see through his (Cheng’s) flashbacks. For the same reason, he wanted to earn enough money to return and fulfill his dream back home. 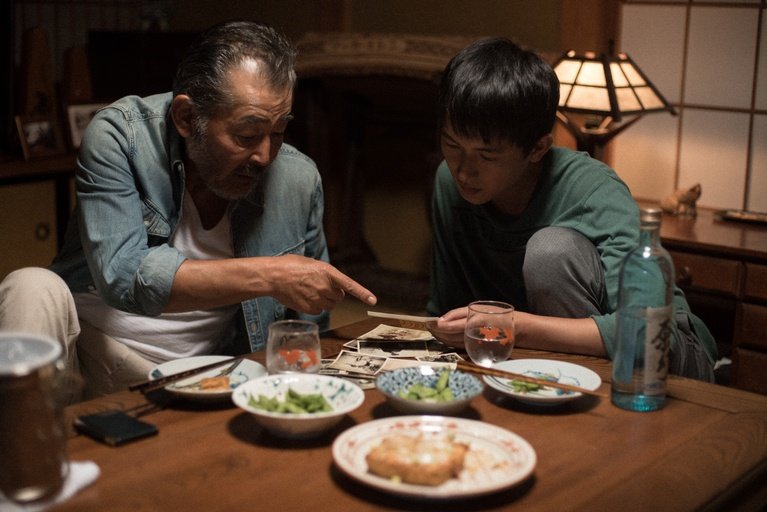 Eventually, his continuing enthusiasm and perseverance towards the process of preparing soba noodles, makes his mentor getting infatuated towards him. He seems to find a piece of the puzzle in this apprentice that was lost from his own life, and the feeling was mutual between the two. Meanwhile, Cheng comes across a local woman (played by Sayo Akasaka) who is planning to move to Shanghai to join an art-school to pursue her dream of being an artist. While his romance with her starts to blossom over small interactions, his immigrant friends, and as a result all the painful memories, start coming back to him. And with his life being built on several lies, he starts getting even more disoriented while hardly having a place to settle.

Despite having the conflict rooted in a particular nation, the film never becomes insular in order to critique the way the immigrants are exploited there, at times. It rather paints a sympathetic and universal picture of an individual who’s constantly searching for his identity. The ennui on his face repeatedly takes us into the psyche of an outsider or a misfit, be it in any social construct. Besides, the understated performance by Lu Yulai never lets one out of the trauma that Cheng would be going through. The purposelessness of his life is further trivialized with the constant struggle to not seem like a failure. Every joy has some stigma attached to it. Every smile is evident for the painful past he had gone through.  And the film is always aware of his pathos with the continuation in its tones, without overblowing any of its elements.

Other than the aforementioned performance by Lu Yulai, all the supporting cast does a fine job as well. Tatsuya Fuji portrays a fatherly figure with the character shifts seeming just as natural and believable. And even in a seemingly small role, Sayo Akasaka impresses as someone Cheng would want to switch the lives with. After all, who wouldn’t want lesser complications to deal with? And even the cinematography achieves a contemplative tone which is just as important as its editing that shifts between different time intervals without exhausting the tension.

As a result, ‘Complicity’ becomes a universal tale about an immigrant, which is just as much of any misfit who is trying to find meaning for his/her existence.