Read previous entries for: She’s Gotta Have It, Summer of Sam, Jungle Fever

The overwhelming marketing of this new Spike Lee film (the most a film of his has received in years/decades/ever?) may lead you to believe he’s back on form in storytelling and filmmaking – and you’d be lead right. BlacKkKlansman takes an extraordinary true tale and gives it even more of an extraordinary oomph to make it a wildly entertaining and wholly engaging piece of storytelling – its success at providing such thrills makes up for its socio-political shortcomings.

John David Washington is escalatingly captivating and commanding as Ron Stallworth, a newcomer to the Colorado Springs Police, who instigates a plan to infiltrate the Ku Klux Klan – he keeps up correspondence over the phone, whilst officer Flip Zimmerman (Adam Driver) is tasked with the face-to-face meetings with the white supremacist “organisation”.

This story gets increasingly crazy (and further away from the truth), but becomes an ever-tighteningly tense series of events that completely captivate an audience. Lee’s usual eccentric style (unusual angles, stark colouring, fourth-wall breaking)  mostly takes a back-seat in the film’s last third as the story and characters all culminate in perfect fashion, though Lee nonetheless still films with a grandness that is best suited to the big screen, with some help from long-time collaborator, music composer Terence Blanchard. The BlacKkKlansman soundtrack is an absolute steal.

As is expected from Lee, he doesn’t flinch at all from presenting the sordidly racist vernacular and disturbed race-based ideologies of Colorado’s Klan community, but he is surprisingly still careful and mature about his portrayal of such hateful people, as so much easily-generated, but worthless exploitation could’ve been mined from them. Lee may paint the KKK members as absolutely unempathetic, but that doesn’t stop him from making them invigorating characters to watch on screen, detailing their disturbed ethos and their misguided willingness to violently spread it across the USA. Such a hateful group hasn’t appeared so vile on screen in a while, but Lee avoids easily antagonizing them, instead of using not only their vulgar demeanors but their contradictory “non-violent” approach as a moralizing judgment.

There’s a responsible diversity in temperament amongst the racists in the Klan, ranging from outwardly antagonistic and untrusting Felix (Jasper Pääkkönen), the dim-witted human foghorn Ivanhoe (Paul Walter Hauser), the less radicalised and more communal Walter (Ryan Eggold), and the authority figure David Duke (Topher Grace) who presents his supremacist and separatist ideologies as assuredly as a politician. Each of these characters varies in how violently-minded they are and how racist they sound in everyday conversation, and this becomes a determining factor in how Lee concludes their arcs.

Interweaved with the atrocities of racism in BlacKkKlansman is the notion of how they can be disseminated through the visual-aural medium of cinema itself, questioning the way it can be used to instruct the values of a society. This is how BlacKkKlansman kicks things off, opening with an infamous shot of wounded veterans before the Confederate flag from Gone with the Wind, then cutting to a ‘50s-styled horrifically outdated instructional video, showing Dr Kennebrew (an excellent small performance from Alec Baldwin) giving a sermon on white supremacy and segregation, which displays not only one of the film’s stylistic high-points (Lee projecting all sorts of wild colours and videos over Dr Kennebrew) but also establishes the simple-minded ethos of the KKK and how those values can be encouraged through propaganda (including films).

There is also a conversation about blaxploitation cinema between Ron and his new potential squeeze Patrice (Laura Harrier), eagerly discussing and exploring the new way cinema is portraying black people – though a fun conversation to watch, it feels like one of the film’s more isolated sequences. More importantly is a cross-cutting montage between the KKK reacting animatedly to their own Klan during a screening of The Birth of a Nation (1915) with a speech given to a black power movement about the horrific public lynching of Jesse Washington that occurred during a time when the KKK became invigorated after the release of The Birth of a Nation. 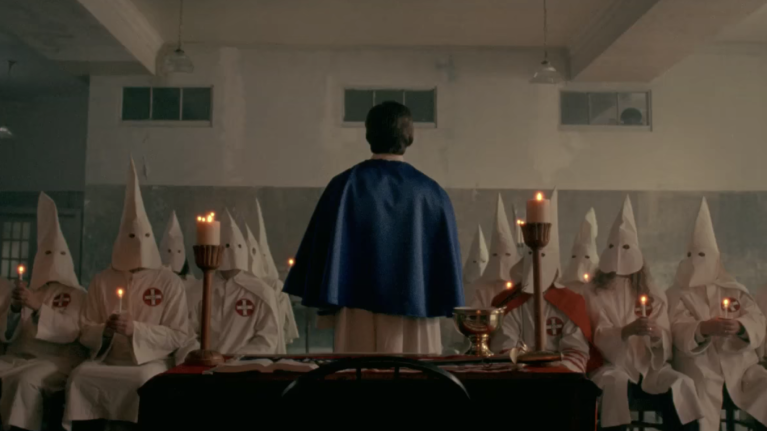 Such harrowing sequences like this work well (even when sitting next to the thrilling and comedic moments), but Lee just can’t help himself at this stage in the Trump era, inflating the film’s own topical importance by concluding this film with footage of the Charlottesville rally, the resulting death of a woman, and Trump’s much publicised reaction. It’s a tenuous connection to what comes across as an otherwise contained story – the politics in the main story aren’t quite as palpable to make this connection work, and this doco coda seems not only clunkily assembled, but ill-fitting for a story like this.

There was the chance that the politically charged Lee, who sometimes goes off the handle with rendering them in his films, would have to direct the audience by the hand to so obviously illustrate the current-age connections he was trying to make. It’s not really any surprise that white supremacy still exists, as there’s plenty of documentaries illustrating this, as well as how it is continuing to subside (which Lee doesn’t allude to), making this uneasy awkward ending feel irritatingly superfluous.

After such carefully written and assembled storytelling with a finger firmly on America’s pulse, this wonky hastily slapped-on epilogue is the only sore appendage that sticks out of this otherwise excellent film. It’s a riveting yarn, made all the better by the pitch-perfect performances from all, the bold and ballsy script, the remarkably punchy visual style, and the confident control Lee has over the tone, changing it slowly from scene to scene. Perhaps most of all, it’s a film that feels very much alive, getting better and better as it reaches its end (apart from the very end), and that’s the kind of quality Lee has demonstrated before and has now demonstrated again.

Hereditary Review [2018]: Horror In All Its Twisted Glory