Gorchakov enters gigantic cavernous spaces of memories, utterly lonesome, salvaging the remains of his existential life but exits losing himself even more profoundly in the process.

0 shares
It has often been said that aging is the only trade possible for gaining sentience. In my yester-years, I remember scurrying across the Andrei Tarkovsky filmography and feeling cold. There was an unstoppable sense of alienation and like granules of dust clenched in a fist, the essence dripped right through my fingers. Today, with my own plethora of memories and minimal wisdom thus attained from them, I feel awakened to the themes echoed by Andrei Tarkovsky’s Nostalghia.

When Tarkovsky left Russia so as to exercise his artistic cinematic freedom which was then curbed by incessant censorship, much to the irony of situation, he ended up concocting a film which is in all it’s essence a homage to his homeland. Nostalghia centers itself upon Andrei Gorchakov (Oleg Yankovsky), a lonely writer who visits Italy along with a translator to understand the works of a forgotten musician. He then encounters a mad soul, Domenico (Erland Josephson), much like a mirror to himself, who has shunned society for the fear of an upcoming apocalypse. In Gorchakov’s sheer solitude, haunted by lush blacks and whites of his life in Russia, he befriends him interpreting the means of saving the entire world as a masquerade for the cure of his illness. 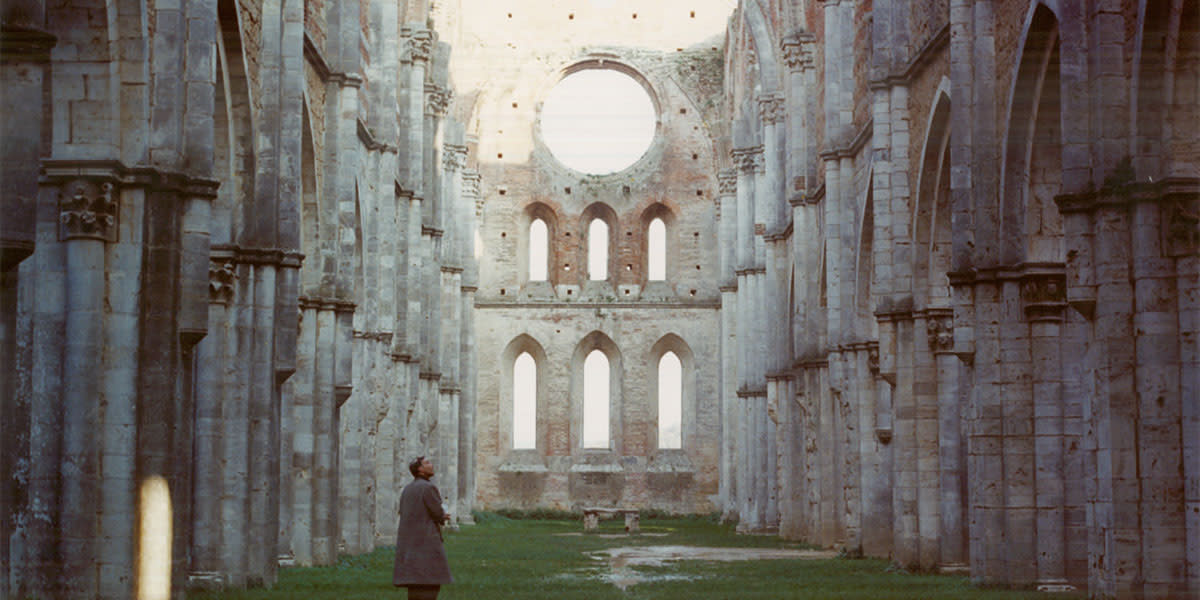 Truth be told, it is often frustrating to unpack Nostalghia as Tarkovsky does not delve into any kind of exposition, as if, the sole purpose of this avant-garde art form is self satisfaction. The central character goes through similar agony as Tarkovsky and the state of nostalgia, rather than a wistful remembrance, feels more like a somber meditation on loss and solitude. Deeply reflective long shots, frames within frames, shadows vying for their glory from ever present light and constant background noises like that of incessant rains makes Nostalghia an immersive albeit a challenging experience. The suffering of it’s central character is further aggravated in the essentially allegoric and oft praised climatic sequence which thematically resonates the entire concept in mere few exhilarating minutes.

Tarkovsky has framed the village of Tuscany with haunting eyes and shape-shifting mists making it feel like a spiritual space loosely suspended in time. Gorchakov enters gigantic cavernous spaces of memories, utterly lonesome, salvaging the remains of his existential life but exits losing himself even more profoundly in the process. Nostalghia is a hard and testing look at isolation, one that is expansive in scope and yet deeply personal in its exploration.

Upgrade Review [2018]: An Alarming Glimpse of the Near-Future