Being a protégé under the hands of the legendary Hirokazu Koreeda, Nanako Hirose’s debut feature created quite a stir. It definitely perked up the viewers like me who are ardent admirers of his master. So, a comparison ought to happen. And it would be fair to say that the trailer for ‘His Lost Name’ falls in the same oeuvre which hints the apparent sense of nonchalance being acquired with the careful handling of space and time. It certainly does not fail in that regard, while seamlessly resonating with the viewers. Furthermore, the film also tackles the topic such as death or the futility of life, while looking at it from the lens of family-bond, like how Koreeda does. Still, there’s very little to make up with the subtext in this film, to reach his level of greatness.

Yuya Yugira plays the protagonist, who is found one day near a river flow at a remote village. Tetsuro, who finds this 20-something young man in an unconscious state, takes him back in order to treat him. Since he is working as a carpenter at his own woodshop, he gives this youngling a shelter and offers a job as well. The young man, who initially introduces himself as Shinichi, starts building a paternal connection with Tetsuro. Not just because the middle-aged artisan was childless at the time, but rather because Shinichi was the name of his son who died in an accident. In this way, the new visitor knowingly & unknowingly starts taking advantage of Tetsuro’s noble nature as well as that of his fiancé’s who used to work along with him. 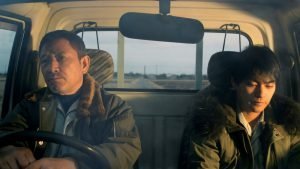 Similar Read: AND YOUR BIRD CAN SING [2019]: ‘JAPAN CUTS’ REVIEW- AN ODE TO THE MUNDANE

Not explaining too much further, all I would say is that the film tries to examine the interdependence of these two characters whose wounds more similar than they could imagine. There’s enough tenderness or warmth felt throughout the film, even in the bleak environment. Thanks to the editing and cinematography where both of the factors always stay true to the core feeling. Whether it is the apparent dissociation felt through its milieu from the village, to a much fresher and lively light-filled setting; the technical details are used to occasionally highlight the alienation of this disoriented young man, who commits suicide because of a lack of human connection. The emotion hardly ever breaks within its duration and the film just pushes us more and more into its depressing set-up.

Still, the aforementioned mystery of these characters, a sort of stigma connected with their painful past, isn’t enough to hold throughout its runtime. Moreover, the supposed mystery is very thin because of the lack of enough subtext. That’s what primarily sets it apart from her master, whose every film has a lot to unravel from the layers of its characters. Sadly, His Lost Name doesn’t dwell quite as deeper into the tragedy related to Shinichi or even Tetsuro and just meanders around for longer than required. As a result, the film never seems to leave the initial stage-intrigue about its characters, resulting in a comparatively dull structure.

Not to assume that there’s nothing to admire besides this because I was quite moved irrespective of the aforementioned shortcomings. Yuga Yugira’s eyes that somehow felt too strange to resonate with, a little creepy at times, perhaps work for the better of the film, highlighting the overall strangeness of his existence after a particular incident triggers all of his traumas. Even Kaoru Kobayashi, who plays the middle-aged Tetsuro, conveys a vivid range of emotions whose life brightens up by a sudden visit of this newcomer.

In the end, His Lost Name remains a largely admirable attempt which needed a little more character-depth to flesh-out its central tragedy.