Imagine a full-fledged comic actor, rather one who rose to fame by his comic work attempting a much more dramatic role with a wider palette. Deepak Dobriyal caught many viewers’ attention just like he did mine when many of us saw the news about him getting cast in the 2019 Marathi melodrama called ‘Baba’. Yet another Bollywood star was on his way to produce a regional film, and despite that, I was way more interested in what Deepak does with this mute father’s character. There were a few glimpses of his acting brilliance in the initial trailer, which someone gave the idea of its central premise. Besides that, the cast filled with acting charms such as Nandita Dhuri and Spruha Joshi or even Lathe Joshi fame Chittaranjan Giri made it too enticing.

There were the obvious hints of melodrama associated with the parent-children relationships in the promos. The film although begins with a little naturalistic tone where a child is shown looking at a faraway land (a not-so-far village) with the help of binoculars. In the next few moments, he leaves through the grassy terrains towards his small home located in the middle of nowhere. He is also accompanied by a dog. The only sign of life at this place other than the wind and the birds is a woman (Nandita Dhuri) that warmly invites him in. Much like a mother would.

Similar to Baba (2019) – WELCOME HOME [2019] REVIEW: A CEREBRAL DECONSTRUCTION OF THE INSTITUTIONS

We get to know her (Anandi) and even his father (Madhav, played by Deepak Dobriyal) in the later scenarios. Both of whom appear to be deaf and dumb. We assume that the kid would be like them until we see him reacting to them other than what he is introduced with. The one thing that the film clearly succeeds in presenting is an inseparable sense of surroundings. We understand for a fact that he can’t escape this particular setting and the endowed freedom and warmth which is affirmed by the beautifully shot serene landscape. Nor can he escape the couple that is present for him at his every single step. Even in the moments that they’re not around. 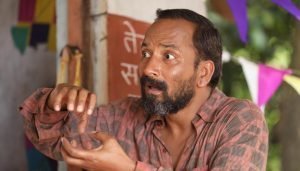 The conflict from Baba arrives not too late when a couple arrives at their small abode, claiming that the kid (Shankar) is their son. The lady (Pallavi, played by Spruha Joshi), claims to be his biological mother. She had apparently conceived him before marriage. This was, however,  against her father’s will. The husband that we see (Rajan, played by Abhijeet Khandkekar) isn’t the father. Yet, he accepts to parent him as his own child. And in this fable, Madhav and Anandi become the helpless ones. Despite having raised him for all the years, they have to fight for being a parent to this little kid.

Many refreshing things regarding morality are introduced in terms of Marathi films. The moral puzzle isn’t interested in taking either side here as much as it wants to question what it means to be a parent. And who has a better claim at that? The one is the understanding of how to nurture or ensure a better future for the child. Coming to the title – ‘Baba (2019)’ which means ‘father’ in Marathi is the true crux of the film. The film shows several sides of fatherhood. We see a father who doesn’t accept his daughter getting pregnant before marriage and thus abandons them and the one who would go to any lengths to fulfill his child’s interests. Then there’s the absent father that we’re not shown in the film and also the one who understands fatherhood as a selfless act.

Although such perspectives are presented in the film, some of them are not fully fleshed out to get a clearer picture from either side. The film indulges a little too much on the sentimental arc of the helpless parents in comparison to the one set forth by the urban couple. This is not much of a complaint but this is something that makes the film to become largely uneven. Not just that, but the haphazard editing at times without a complete clarified idea of how the scenes at both ends are related results in jarring tonal shifts. Also, the largely melodramatic moments in the film heightened with the use of music doesn’t gel that well with the intentional silences spread in between. It just feels like an effort to make both ends meet in order to reach populist viability and still become heart touching. The film, unfortunately, becomes an uninvited mess because of that.

What saves the film is the acting department which largely belongs to Deepak Dobriyal. The simplicity in his performance becomes largely advantageous to the script’s humble intentions. It’s him and the sincere performance by Nandita Dhuri that keeps us interested in their pathos. It’s especially the dramatically heightened moments where their acting prowess becomes visible and makes the film’s motives appear to us. And the gorgeous cinematography hardly ever feels showy with the lights feeling immaculately controlled in order to serve the narrative.

In the end, the conclusion that the film shows is definitely satisfying and rather fitting for a moral fable. Only if all of the film’s aspects were handled with precision. The film could have been much more rewarding.

Léa & I Netflix [2019] Review: Yearning For the Alternatives and a Better Life