“This is my best friend Léa. Léa speaks five languages, cannot stop eating Haribo candy peaches and has cystic fibrosis, which means her life expectancy hovers around 37”, says Camille Shooshani in the trailer, who’s the ‘I’ from the title and the director of this film. Looking at that promo, it felt like the film could go either way, to become a pretentious piece about how these alternative and local therapies are the fitting answers for the western medicine or become a genuine attempt of these two friends into soul-searching. Gladly, the documentary serves the latter purpose, getting into more personal and often blurted insights; while hardly ever being preachy about these options.

Léa Moret, the aforementioned friend of the director, is a 23-year-old Belgian-French writer who went to USC from Los Angeles. After graduating from the college, she wrote and produced this film with Shooshani, an under-graduate from the same college. The film is presented in a way to showcase a voyage of these close friends, rather than any kind of documentation trying to make a statement. We see camera hovering over them while they’re making simple choices or even going through some unpleasant fights.

Similar to Léa & I – OWN WAY [2019] REVIEW: A MIDDLING SOUL-SEARCHING JOURNEY

Cystic Fibrosis, the condition that Léa is suffering from, is a genetic condition which doesn’t have a cure in western medicine. The life expectancy for that is approximately 37.5 years which causes a build-up of mucus in the patient’s lungs and other organs. For the same reason, she is required to take 20 digestive pills a day, frequently go on antibiotics, and visit the hospital every three months to have her lung function checked. She isn’t a conformist and doesn’t even like to mention that she has this condition. She often smokes despite that and does not take her medications at times. A kind of fatigue, which can be sensed through the conversations with her, makes her go on the journey to South America in the search of alternatives. 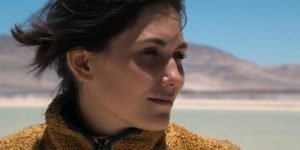 Although she would much prefer for the condition to be cured, she is aware of how senseless it can be in a practical world. Thus, she is looking at them as supplements, as something that would help her in the process of healing and not the cure itself. Both of them tried things like essential oils, peyote, bio-magnetism, plant medicine, shamanic ceremonies, and frog poison when they visited these places. The Ayahuasca retreat that the film goes in more in detail with changed them in the spiritual sense, while also challenging their bond at times.

The film is well-edited where the pace helps the core of narrative which is the notion of healing through their mutual decision of going through the process. It cleverly mixes their individual perspectives while sharing a lookout into those who completely believe in these processes. The film ultimately becomes more about trust than the benefits of these options. The personal touch implemented gives it a grounded feeling. The way it has been shot complements the same purpose and makes it more connective.

After these experiences, despite not getting completely treated, Léa certainly sees herself as a different person so does her best friend. And that’s what the film tries to encapsulate, like what the director describes in one of the scenes, to go through these strange processes keeping the brains aside. That helped them to accept their conditions and inhibitions (the overbearing anxiety in the case of Shooshani) and thus, leading a considerably better life. Perhaps a little more information on what exactly goes through these processes and why they’re considered to be effective was told, the documentary could have been more purposeful in a sense. Still, it has enough heart to experience all of their joys in the fullest.

In the end, ‘Léa and I’ turns out to be an enriching soul-searching documentary which has much to admire.

Léa & I is now streaming on Netflix
Link – IMDb