Meek’s Cutoff (2010), the fourth feature from director/editor Kelly Reichardt, is a transcendent morality tale that, like Chloé Zhao’s The Rider (2018) after it, uses the expanse of the West to stage a critique of the masculine heroism that has infected the genre since the days of John Ford.

To put it rather lazily, the film follows three small families and Stephen Meek (a perpetually squinting and sluggish Bruce Greenwood) on a revisionist history of their travels. Soon after we enter this world, the group runs out of the water and realizes Meek has about as much of a clue about where to go as they do. For most of the run time, the characters are largely defined through their philosophies, their silences, and how they feel about Meek.

Just like any real-life history, the motives for their desire to escape, or to colonize, are unclear. As they trudge through the desert, the mythic ambiguity afforded to the characters gives us watching at home the chance to sweat with them. We are as clueless as they are, and this ties us together.

The cast: Michelle Williams, Bruce Greenwood, Shirley Henderson, Zoe Kazan, Will Patton, and Paul Dano, to name “a few,” are just as transportive as Christopher Blauvelt’s photography, which draws the audience into the cracks in the salt flats and the arid trees as much as the eerily oscillating cloud formations.

Even the score is sparse (the album’s full runtime is 21 minutes), gliding across the soundscape like the ghostly songs of a bird cooing from beyond, reminding us that there once was life. The otherworldly environment, a minimalist haunt of a score, and Reichardt’s elegant long-takes contribute to the group’s hysteria in a way that begins to manifest a little more than halfway through the film when we are finally met with the inciting incident.

One night while the men are away, Emily Tetherow (Williams) hears rustling outside and, never one to sleep through to morning, goes to check on it. Amongst the darkness, she sees a member of the nearby Cayuse tribe and shoots off several warning shots for the men to hear. He (Rod Rondeaux) is soon captured and tortured physically and verbally— in a language he can not understand. Fortunately, Reichardt seems uninterested in the idea of showing violence toward the captive onscreen.

This is not only humane but an extremely effective way of ensuring we understand the brutality of Meek and the other men as inappropriate and unwatchable. Withholding violence is the unique technique that remarkably strips us of gut reaction and adrenaline while instilling waves of tension into every moment. Surely we can all imagine something more jarring to our experience than even Tarantino can conjure up. 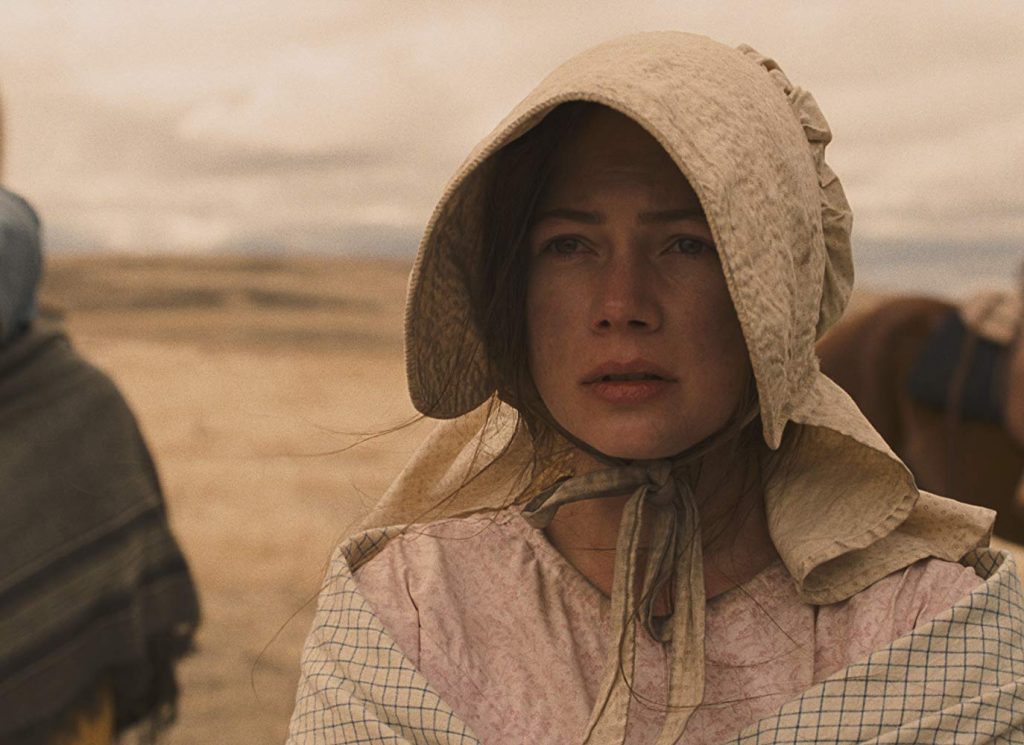 Every decision in the film works to generate an active meditative state in viewers. The first chunk of the movie is mostly remarkable for the way it brings us inside and sets us up to question our own prejudices and silences as the collective deals with Rondeaux’s character.

In one of many arguments between Meek and Mrs. Tetherow about “The Indian,” the Guide asserts that the fundamental difference between men and women is that men seek destruction and women chaos. In this movie, it turns out to be one of Meek’s more insightful misunderstandings, as Tetherow’s strange motherly affection towards The Cayuse undoubtedly appears to cause chaos inside the unit. Needless to say, paranoid men get us close to the unit’s total destruction.

As much a characteristic of 2011 fear-mongering as it is today’s, every person on the journey uses their captive for a unique scapegoating purpose. Solitary Meek blames his perpetual misdirection on the Native American man and tries to kill him on multiple occasions. He constantly warns everyone of deep dark violence, taking advantage of the fact that no one else around has ever encountered someone of this difference. Thomas Gately (Dano) is worried that the man is leaving behind signals with which his friends can track him. Mrs. Gately (Kazan, who is real-life partners with Dano) spends the last third of the movie seemingly possessed, screaming “THEY’RE COMING,” long after everyone has been desensitized to it.

The White’s are notably opinion-less in all matters, blank white pages, and they frequently hop sides. The Gately’s are said another side, presenting the most functional relationship here, even by today’s standards. While the other men shush or stay silent themselves, Emily does most of the talking for the Tetherow family. Her cold brand of caring for The Cayuse works in harmony with the spectrum of freedom and partnership presented in the film. We move from canvas to character once we are given the chance to see how each woman is or is not policed by the man she is with, how each reacts to the individual who embodies the disruption of their routine.

Lonely and frustrated. Powerless and commanding. Violently silent. With men like this, it is only natural that our hearts follow the women, so it is interesting that characters like theirs are not given the spotlight in mainstream cinema more often. What is even more interesting is that our “hero,” Mrs. Tetherow, has a fractured patronizing way of interacting with the Cayuse. For every time she offers to sew his shoe, there is a cringe-worthy speech about how he would not believe “the wonderful cities we’ve built.”

It is a massive feat for Reichardt to ultimately engage us with a character who is silent or speaks in an ancient language most do not understand, but, without any gun battles or galloping horses, she does exactly this. Through cracked floors, longer takes than we’re used to, and ignorance, we regret our very existence and contemplate the idea that maybe we should have turned around shortly after the first person was tied up. In a landscape of unique beauty, we are left with the tinny taste of disgust.