"Marlina the Murderer in Four Acts" is the kind of film that film enthusiasts like us crave every year. The subversive romp of the generalized troops plus a badass protagonist who is thrown into a mix of mordant humor & sly playfulness of motifs makes it one of the best films of the year.

There’s no exact way to categorize Mouly Surya’s “Marlina the Murderer in Four Acts.” It’s neither just a western or just a rape-revenge drama. To put it only mildly, I’d call it a cross between the aesthetically pleasing feminist troops of Ana Lily Amirpour‘s “A Girl Walks Home Alone At Night” & the calmness, subtlety & deadpan humor seen in Jim Jarmusch’s psychedelic-western “Dead Man.“ Set in the deserted, picturesque hills of Indonesia, this badass tale of seeking justice is slyly brimmed in a heating pan until it boils up with unmatchable fury.

The film opens with ravishing rural landscapes of a remote Indonesian island. A biker stops at a solitary home whose only occupant is a recently widowed woman called Marlina. He quietly perches onto her home declaring that 7 men will be coming to her home in order to rob her of her livestock. He also calmly tells her that they will eat a meal cooked by her & then rape her one after the other. The director has pointed out that In Sumba, men move in gangs with machetes and swords weaving their patriarchal powers over everyone else. Traditionally, a scene like this one is considered as ‘being polite.’

As the man sits down to play his instrument & wait for his coffee, we see him pointing holes in Marlina’s character. He orders her to prepare chicken soap as the first act – The Roberry rolls up. There’s a constant veil accusation of women’s place in the society. Where he tells her that “Widows should not be so feisty” and that she should not try to shield her vulnerability now. Which only makes Marlina furious instead of scared. When her livestock is taken away her anger grows into a fury which brings us to the end of the first act with shuddering results.

The Journey that forms the second act is probably the most cinematic things you will see all year. There is a slurry of cheeky characters with one-dimensional agendas. The overly talkative lady who has been pregnant for 10 months, the middle-aged woman who is desperate to take two horses back to the place of a marriage so that her nephew gets married in time & off course the woman – Marlina in her most badass persona yet. She is seeking justice, but the act is more about giving us a female counterpoint to an otherwise tediously tamed western genre ruled by male pseudo-machoism. There isn’t much blood & violence that is splattered on the way, but other repressions on women are uncovered without sounding preachy. 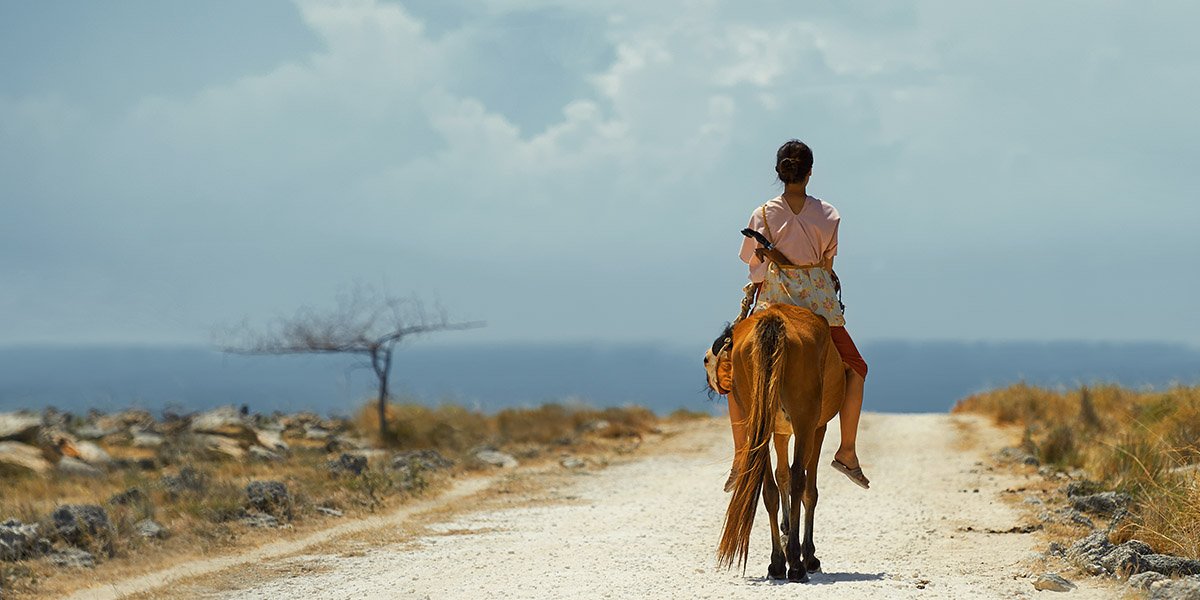 The third act that is titled ‘The Confession’ follows Marlina as she somehow manages to reach the authority. Their failure to really see through the matter again insinuates how ridiculous justice can really be. A small episode of her befriending a young girl, however, puts a new light on this tale that defies genre conventions on every step of the way. Giving depth to the emotional side of it all, we see a rundown into Marlina’s past without actually getting into it. Mouly Surya’s real masterstroke is slowly building up Marlina as a strong woman and yet pile up well-earned empathy for her.

The fourth act titled ‘The Birth’ sees death & birth coming into one whole. The nature of things while seeking justice often come back full circle & Surya’s brilliant last act confirms that there’s so much depth to her work in spite of being set in a world that feels too far-fetched from reality. This act sees the two women – Marlina & Novi triggering their awakened soul to the extremes. A Tarantino-esque climax is expected, but what you get is calming chaos.

Off course the film owes quite a bit to the well respected Indonesian director Garin Nugroho (credited for the original idea of the story) but Surya gives an uncanny depth and catharsis to Marlina. She throws her into a place where everything feels well earned. The writing is phenomenal, especially the way the tale keeps going on in spite of certain pit stops. She keeps building nail-biting tension that’s laced with a kind of humor that is very hard to pull off.

Much is also indebted to Yunus Pasolang’s gorgeous cinematography while Yudhi Arfani & Zeke Khaseli’s amazing score – a quirky mix between Ennio Morricone’s classic western score & Neil Young’s aesthetical electric + acoustic guitar combo, breathes new life into the film. The use of local instruments with these contemporary instruments seems like complete magic. Marsha Timothy needs to be applauded for her turn as Marlina – the most badass female character of the year. She plays her with a straight face and yet manages to give her emotional depth in two specific scenes. What an actor.

“Marlina the Murderer in Four Acts” is the kind of film that film enthusiasts like us crave every year. The subversive romp of the generalized troops plus a badass protagonist who is thrown into a mix of mordant humor & sly playfulness of motifs makes it one of the best films of the year.

‘MARLINA THE MURDERER IN FOUR ACTS’ WAS SCRENNED AT THE 2017 TORONTO INTERNATIONAL FILM FESTIVAL.
CLICK HERE FOR OUR COMPLETE TIFF COVERAGE.