The President (2014) definitely lacks subtlety when compared with Mr. Makhmalbaf’s previous lyrical masterpieces. Yet, the overt symbolism and slightly pat but much-needed final message would help the film to reach wide range of audience. 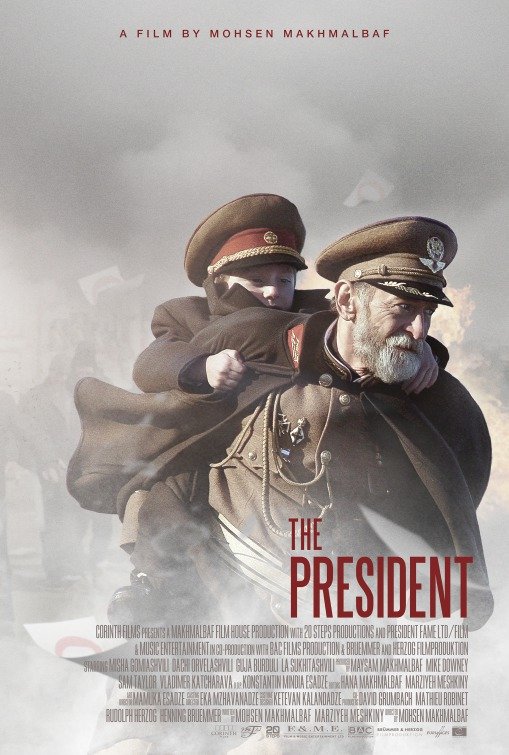 Human rights activist and renowned Iranian film-maker Mohsen Makhmalbaf’s The President (2014) opens in highly fascinating manner. A dictator of an unnamed country cruises through the ludicrously decorated road in his limousine. Later, the president sits in a multi-storey building overlooking his palace. The president’s little grandson, in military uniform like his grandfather, asks for an ice cream. Owing to health reasons, the boy’s request is denied. But to distract him, the President orders by telephone to turn off all the lights in the city, save for the bright lights in his palace. The boy is enchanted once the lights are turned off and on. He receives the receiver from his grandfather and orders the lights to be switched off. It’s an interesting demonstration about the absurdity and dangerous nature of absolute power. The light, however, doesn’t get turned on. This ruthless game of dictatorship has nearly come to an end, since only the blaze set by revolutionaries are visible in the cold darkness.

Director Mohsen Makhmalbaf confides that the initial spark for The President was gained when he visited rubble of the Darul Aman Palace, in Kabul. Later, the Arab Spring helped Mr. Makhmalbaf to intricately write on the fresh onset of post-revolution catastrophes. The President is a Georgian, UK, German, and French co-production with key roles played by Georgian actors and shot in Tbilisi, Georgia. The collapse of the unnamed country’s dictator echoes similar incidents taken place in different countries all over the modern world. It’s good that the narrative isn’t country-specific because unfortunately, it’s likely to happen in the future too. The president (Mikheil Gomiashvili), his 5 year old grandson or Royal Highness (Dachi Orvelashvili), President’s wife, and two daughters are en-route to airport to fly to a neutral territory. The President decides to stay for few more days and the grandson clings to him (the boy’s father and mother are killed by revolutionaries). While coming back from the airport, the President witnesses that things are well past the tipping point.

The revolutionaries have seized the city and the ‘loyal’ military men seem to have withdrawn the support for their majesty. The state radio, which bestowed wide range of titles for the ruler, now addresses him as ‘the traitor’. A loyal bodyguard of the president is gunned down and the limousine is eventually halted at the countryside. The old dictator and the little boy disguise themselves as poor street musicians. The president doesn’t have many redeeming qualities, except for the genuine love he shows for his grandson. The boy who has grown up in the comforts of the palace, playing with ballet-dancing little girl Maria, finds it hard to process the horrors of crumbled despotic regime. The grandson keeps on questioning about the horrific things he sees. Of course, the president is a lot vicious to think of pathways to redemption. He just feels ashamed while experiencing the lawless brutality he has inflicted as well as the same he had provoked in return. Meanwhile, the opposition forces (using the same soldiers as its pawn) consistently raise the reward money for the president’s capture. Some viewers may feel that the dictator’s cruelty is underwritten or less explored. However, Makhmalbaf wasn’t interested in depicting the twisted behavior of the fallen dictator; his interest lies in visualizing the post-regime atmosphere – one that’s punctuated with murder and mindless anarchy rather than hope and democracy. 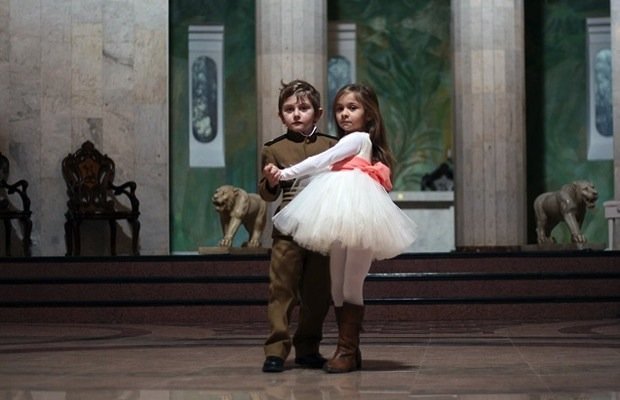 As usual, director/writer Makhmalbaf adopts the tone of poetic realism. He relegates the graphic details of societal unrest to the background and focuses on psychological impacts of the scenario. The gaze doesn’t rest on the little details of tyranny and chaos, but lies on raising contemplative questions about the nature of oppression and the ceaseless cycle of violence. The juicy, thoughtful part of the narrative rests in authoritarian grandfather’s efforts to blend in with the oppressed population, he joyously spent oppressing. Makhmalbaf doesn’t overly humanize the president, but he makes us grasp the old man’s loss of self. The grandson’s character is the vital emotional anchor-point for the narrative. The boy’s sense of loss and bewilderment diffuses small moments of humor, in an otherwise grim drama. In a way, the grandson is depicted as the personification of the innocence, the elderly dictator once may have possessed. Although the president expresses their harrowing journey as ‘a play’ to the grandson, the events doesn’t threaten to become a kind of charade as it was in Benigni’s “Life is Beautiful”. The film definitely lacks subtlety when compared with Makhmalbaf’s previous lyrical masterpieces. Yet, the overt symbolism and slightly pat but much-needed final message would help the film to reach wide range of audience. 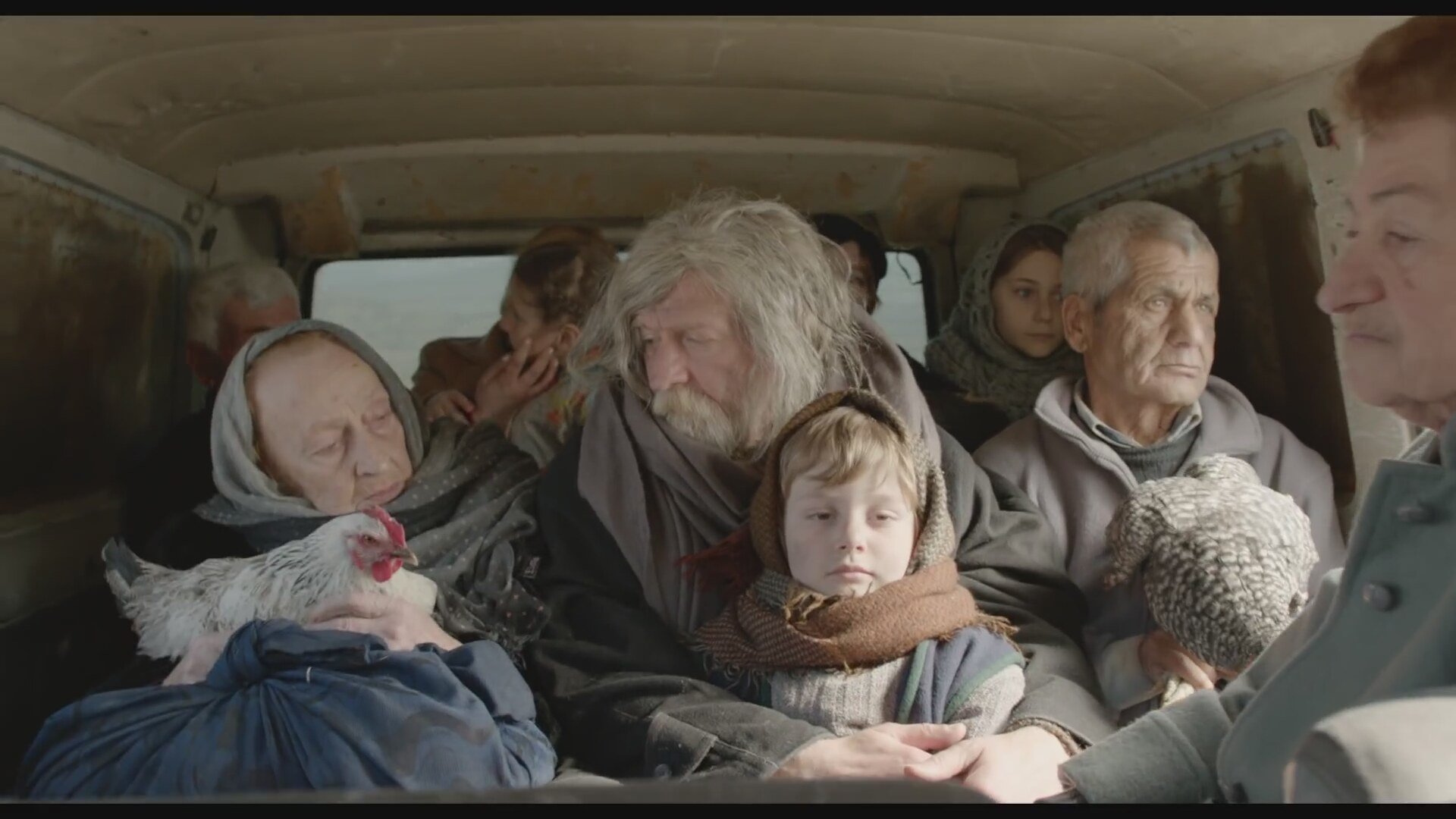 Despite the allegorical nature and fascinating insights about political complexity, the film’s true strength lies in Makhmalbaf’s astoundingly realized ironical images. The marshal gleefully welcomes President and his family with his band of trumpeters. Few minutes after the initiation of chaos, the trumpets are replaced with machine guns and the President’s limousine is chased away. Perhaps, the most ironically humorous moment is when the limousine runs out of fuel. It halts in front of flock of sheep (as if the sheep have arrested the dictatorial regime), which funnily prods at the angry mob’s singular vengeful agenda.  There are also lots of sadly ironic moments too: the military officer with child-like temperament sexually assaulting a bride; or the prostitute struggling with menstrual bleeding, badgered by money-less customers – a personification of the country repeatedly plundered by the cyclical violence between despots and radicals. The ultimate irony is in showcasing how the alleged sovereign rulers, members of elite community, puppet-like soldiers, and blood-seeking mobs share similar taste for revenge and annihilation; only the so-called terrorists or enemies of state call for forgiveness and a move towards democracy. Director Makhmalbaf also conjures up some formally audacious sequences among which the most memorable one is the close-up shot of wounded political prisoner, returning home to face his beloved wife on the doorstep.

The President (120 minutes) is a darkly comic and touching political parable about a dictator’s fall which is very relevant for the post-Arab spring world. It crafts a distinct portrait of the hardships inflicted by a dictatorship and the fresh tragedies unearthed by the successfully launched violent revolutions.