“Our time is limited, we forget that.”

The Fregoli hallucinates the first person into believing there is no second person. And the third person is on a very thin thread between the the first, the second and the third. Shifting gears to be in the shadows of the first. But they are all puppets in the hand of a handler who is devoid of a natural connection searching for a perfect anomaly. He names her so to make her mortal in a world that is all the same, but he has forgotten the signs of life. Even her eating habit can make him slip into the void he was already in. Anomalisa is giddy and valuable. Its the perfect example of taking up a simple premise and turning it into a anomaly in an ocean of artistic block.

Kaufman introduces us to various creatures of his chaotic singular world with characters who not only look the same, but sound the same too. He makes us so full of them that eventually you get inside Micheal’s shoes and start feeling bored. We meet the cab driver whose occasional hate towards the English accent doesn’t take away his regular recommendation of Cincinnati chilli or the Zoo that gives zoo-sized fun. The hotel manager or the valet who talks about the weather, finding it hard to get an answer out of the un-interesting gossip. Or the room service that doesn’t let you communicate your wish in the exact way possible.

Kaufman’s genius doesn’t lie in any of the details but it lies in showing rather familiar retrospect of known territory in a very unfamiliar way. He won’t step back when it comes to showing a guy working at a firm masturbating in his office looking back at the scarce of the work he has done. He shows Micheal in desperation for a connection. He can’t seem to concentrate on the speech he is about to deliver the next day. But even the various ‘fucks’ from the ex-lover doesn’t help him from dialing the numbers for the last bit of connection he could find around the corner. And then like a ray of light at the end of the tunnel, takes us to the hallway where we rush from one person to another trying to stumble onto the right one.

Humans lie bluntly when it comes to their own comfort and Kaufman just presents it in the most common forms. Micheal is basically looking to have intercourse so that he could take his mind off the weirdness the world has turned into. He finds everyone to be the same and hence looks into the mirror, checking if he himself is also peeling his skin off to become the same. His son wants a present when he is back from his business trip, so as he has drowned himself in self-loathing he walks past shops to get into the universe of substantial growth. 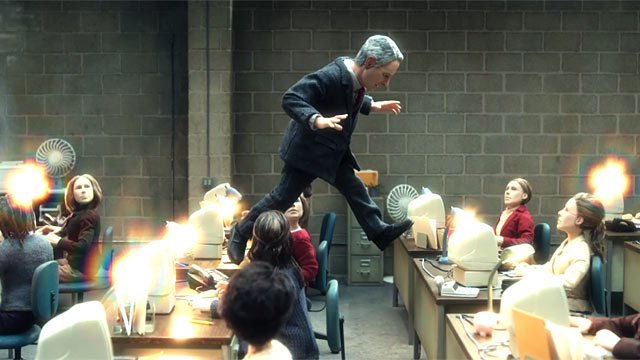 Directed by Duke Johnson & Charlie Kaufman himself, Anomalisa is a profound, although terribly sad tale of human longing. If you are acquainted with any of Kaufman’s earlier work you still might not be ready for this. His head is so full of characters who are falling apart, not because of any supernatural forces but because of the force that drives everyone mad as they rush to come out of working boundries. With its restricted premise (as it almost entirely works out inside a hotel) its a testament to the fascinating human psyche whose endless corridors will never be touched completely.

Anomalisa is about a man suffering from extensional crises but its also about the human condition and every other thing you can think off. Its incredibly sad yet it scorches the surface like a cigarette fallen between the two legs. It works like a sex comedy that throws a flying disc into the thin air of alienation. Anomalisa is an achievement with its restricted characters. It has one of the most melancholic tones that a film could have. And when the film finally leaves you, it tells you that you can toast to the good times but they will fade off easily and become extinct, leaving you with non-human things to make you happy. It also tells you to look for the special someone, always trying to look at the best in them.

Anomalisa is a masterpiece as it peels off Kaufman’s own face trying to reach out to the million people who are watching his written words transform into a 90 minutes search for connection. I have seen the film twice and trust me the film will work differently every single time. It taps into the various little cells that ignite different personalities out of the same person. The scope of Anomalisa transcends its vision of human condition and hence its quite tough to completely fathom and respect the film. Although Anomalisa is deeply depressing it left me in splits questioning my own self.