Devoid of any real life aesthetics, going minimalistic in its approach, Simulation is a bold experimentation that almost works.

“Simulation (Tamaroz) ” is an experience that demands your complete audio sensory attention so you can structure the visuals on your imagination.

Iranian New Wave cinema has emerged as one of the most influential and captivating waves which were led by Iranian poet and director Forough Farrokhzad, followed by Sohrab Shahid Saless, Bahram Beizai, and Parviz Kimiavi. In spite of the Iranian political turmoils and non-liberal certification board along with conservative audiences, Iranian films have made a place for themselves on a world map and considered as a pioneer when it comes to drama genre.

Debut young film-maker Abed Abest‘s Simulation gives an insight on how the new breed of Iranian filmmakers is experimenting in their restricted & traditional space. Simulation (Tamaroz) is an experience that demands your complete audio sensory attention so you can structure the visuals on your imagination as Abed sets the film inside a black box, quite literally, throwing enough props uniformly painted an aphid green.

Abed smartly deconstructs the horrible tragedy in a three act show that opens in reverse chronological order. He draws you in his elliptical illusionary cinema, forging the prohibitive ground (alcohol, music, and drugs) and structuring the film primarily on your imagination by feeding you the details discussed during the conversation. It comes together as an audio-visual puzzle that is often intriguing but it is sporadically weighed down by weak writing. Even the performance in those weak patches could not substantiate for the bump not to be perceived. 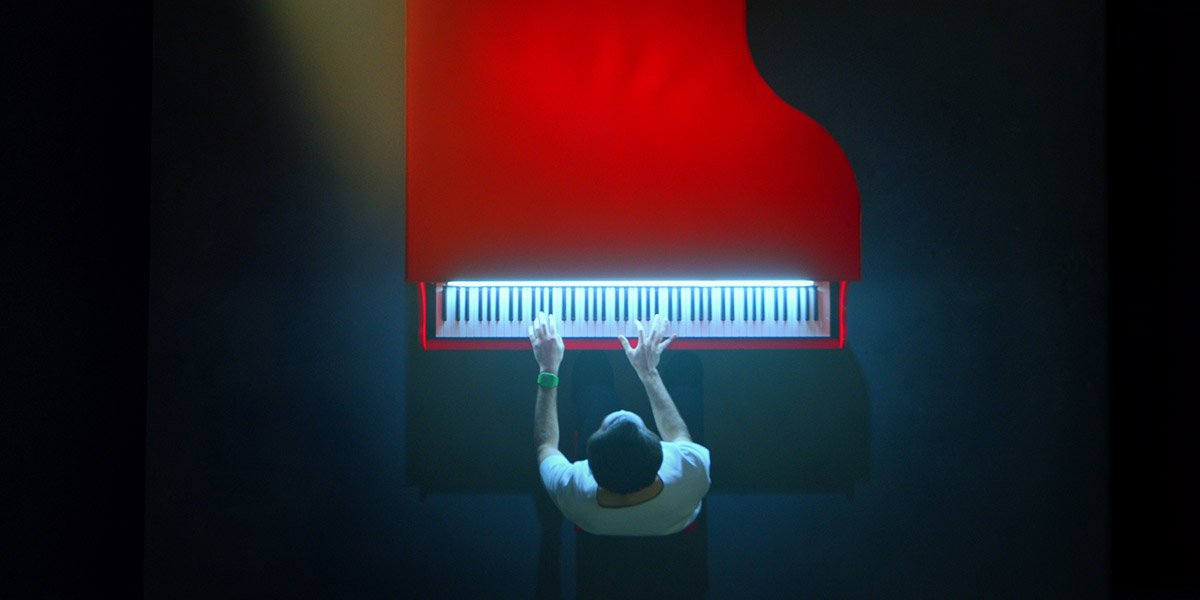 Abed introduces us to a constantly evolving generation of Iranian youngsters. We see three young men (Abed Abest (Abed), Vahid Rad (Vahid), Majid Yousefi (Aris)) and an older man (Danial Khojasteh (Esi)) arrested by police. The initial interrogation reveals that out of their sheer boredom, the three young men decided to pay a visit to Esi, whom they vaguely know from their one meeting. The misunderstanding and discrepancies in their version of stories throw us into the ambiguous state. Shred by shred, fact by fact, we collect them all when earlier events are disclosed to interpret our version of the truth.

All the minute details are revealed during a long conversation that helps in constructing the void space, while the dialogues and the entire chain of sequences leading to the event slowly start forming the emotional crux of the film which is devoid of any overdramatic twist and turns. Music, especially the trippy one inside Esi’s room, and sound design by Bamdad Afshar render required vigor to the dramatic event unfolding in reverse.

Simulation (Tamaroz) is just a skeleton that breaths soul based on our imagination, and Abed does succeed in pushing us to the edge of our imagination to complete the incomplete. Devoid of any real life aesthetics, going minimalistic in its approach, Simulation is a bold experiment that almost works.