I think its almost been an year- I remember watching a video on YouTube titled “The Room – GREATEST MOVIE I HAVE EVER SEEN” by PewDiePie; and all the clips from the movie that this video had. And all I could think about was if it really is a movie, I mean did someone actually make this? If yes, WHY?

Then, to answer the first question I gave it a look.
The Room.
The Cult.
The Classic.
The Midnight Movie.
The Disaster.
and, the Disaster Artist himself – Tommy (from New Orleans) Wiseau.

I had a new question now, how the hell did someone, managed to get people associate to this movie, how did he make this movie? So, The Disaster Artist happened. To end the quest of Why and How?

So, here’s my take on James Franco directed, The Disaster Artist.

First things first, do you need to watch The Room before you watch TDA? In my opinion, no! Frankly speaking it is one of those movies, that is best seen relatively blind. You will be doing your own part of googling to know more about this movie and the myth associated with it.

I had a good idea what I was approaching for, James Franco in lead, also directing the story behind “The Room”; how two nobodies go to Los Angles to make it big in the Hollywood aiming at absolutely nothing with absolutely nothing. Discarded and humiliated by the star-studded mirage; try their own hands on this thing called Cinema. Only to realize that they failed so bad at it, that it’s good. 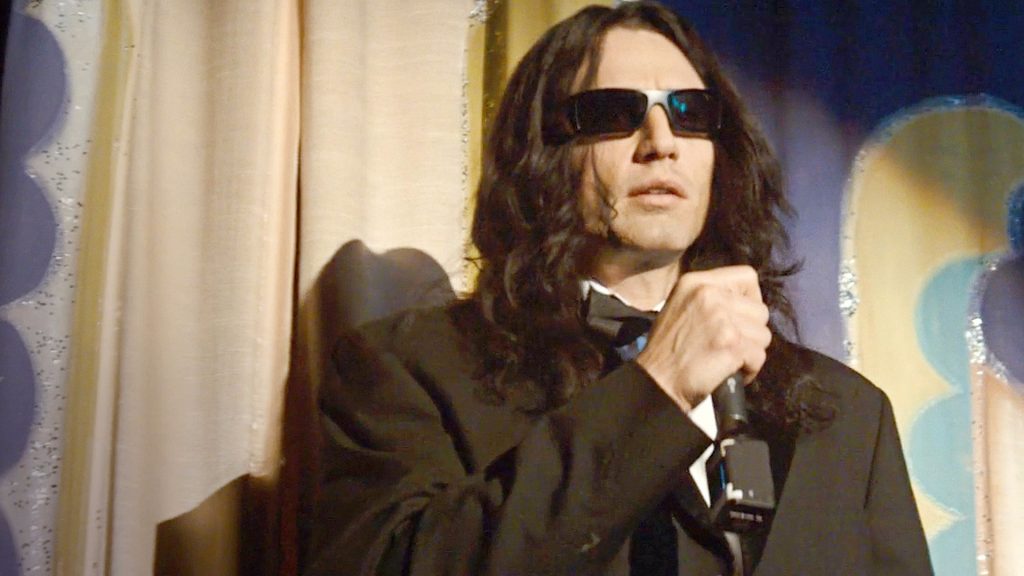 To start with, its an adaptation of the book written by Greg Sestro, who plays mark in the Room and is best friends with Tommy Wiseau. They both met in an acting class in San Francisco, which also happens to be the place where this movie begins. To mention the story, it’s as interesting as the reality gets, obviously. Tommy Wiseau, this guy who says and speaks with this horrible accent that he claims is from New Orleans but sounds somewhat European, is independently wealthy and nobody knows from where does he gets his money and how did he managed to spend 6 million dollars on this movie.

James Franco as Tommy Wiseau is one of the most brilliant and authentic shit I have ever seen. Disappointed by the fact that he or the movie, for that matter; didn’t get an Oscar nomination. But when you watch this movie and come to know about the real person he has based his performance on, you can’t help but appreciate his wonderful dedication to the screen. That weird look, that funny hair and that foul accent, its all there as it should be. He even nailed his mannerisms, the way he dresses and the way he laughs.

I love the fact that how while giving interviews and talking about Tommy Wiseau anywhere, James Franco can’t help but talk as Tommy Wiseau. Everyone else was good too, Dave Franco with a less starry role, playing Greg Sestro also has delivered some real good performance. I saw him as one of those characters who brought seriousness and meaning to the screen for most parts. Zac Efron and Josh Hutcherson deserve mention too, I can go on and mention everybody. Seth Rogen who is one of my favorite actors and I love his performance and dialogue delivery, sadly didn’t do much to notice.

There is something that especially stood out. The technical team deserves an applause cause’ you can’t help but notice that how they have recreated the scenes from The Room so brilliantly same. The props, the lights, the set, mannerisms, the frame it is all so identical its awesome! You will have your eyes fixed on the screen even after it says The End in big bold letters, you’ll know why.

As for the letdowns, there is a moment when you’ll feel it has been stretched, somewhere over 100 minutes. You’ll feel that there’s this scene that could have been avoided. Then, finally the premier happens for The Room and you are again glued to the screen. Another annoying thing about the movie is the camera movements. Though it wouldn’t bother all the audience, I hate how even when the characters were having a one on one conversation the camera keeps shaking, for me at one point it got so irritating that I said to myself, do they feel so lazy telling a story about such triumph?

As for the final verdict, The Disaster Artist deserves your time and money, that is for sure. James Franco has delivered one of his bests yet, acting or directing. The movie is not a mockery, or a parody of The Room or Tommy Wiseau known to be associated with it, its’ not a mockery, it’s a celebration of a triumph that needs to be told.

Akshay is studying B.Com (H), he aims to be a CA. Backpacking, Watching Movies, Reading Fictions, Listening Music, Exploring Gadgets are his hobbies and his interest also lies in photography, which is also something that he wants to take up as a career. He likes to spend his time with his family and friends around.