I like horror cinema that has some fun with its premise. Paul Arkijo Alijo’s Basque language horror, Errementari: The Blacksmith and the Devil (2017) is largely formulaic, and yet remains self-aware of its innate silliness to retain a droll sense of humor. Although Errementari is Paul Arkijo’s directorial debut, Alex de Iglesia’s name (‘The Day of the Beast’, ‘Witching & Bitching’) among the list of producers prepared me for the outlandish aspects of the narrative. Moreover, Errementari is set around the mid-19th century Spain which offers a rich, gloomily portentous atmospheric quality. It’s undoubtedly mindless and a flat morality drama when compared with the dark fairy-tales of Guillermo del Toro (The Devil’s Backbone, Pans’ Labyrinth). Still, it’s surprisingly entertaining and not painfully tepid for a horror feature found among the Netflix catalog.

Errementari is set eight years after the First Carlist war (1833-1840), a time when Spanish monarchy and its people were divided between factions fighting for ancient cultural/religious traditions and liberal reformist values. The Basque region – now an autonomous community in northern Spain – played a key role in the Carlist wars. Of course, understanding this specific time in Spanish history isn’t a requisite to enjoy the film. Errementari unfolds in a dreary little village, full of people upholding medieval superstitions. The local priest sermonizes them to be wary of the liberals (the priest uses the word ‘bourgeois fornicators’). In this atmosphere arrives a government envoy named Alfredo (Ramon Aguirre) of the possibly liberal administration. He seeks information about the blacksmith Patxi (Kandido Uranga), who is believed to have claimed the war spoils, i.e., a shipment of gold.

The villagers admonish the envoy to not set foot in the blacksmith’s fortified and forbidding premises. But Alfredo manages to coax a few locals to join him in his mission. Meanwhile, little Usue (Uma Bracaglia), a bullied and orphaned girl, looking for her missing doll enters Patxi’s compound. The blacksmith, cloaked in battle-ready armor, shoos away Alfredo’s men, while one man accidentally caught in one of the booby traps, gruesomely dies. Introduced as ‘a man so cruel that even the devil himself would fear him’, the bulky and bearded Patxi looks the part. But as the archetypal characters of the village gets ready – under Alfredo’s supervision – to storm Patxi’s compound, we can easily connect the narrative’s loose threads. 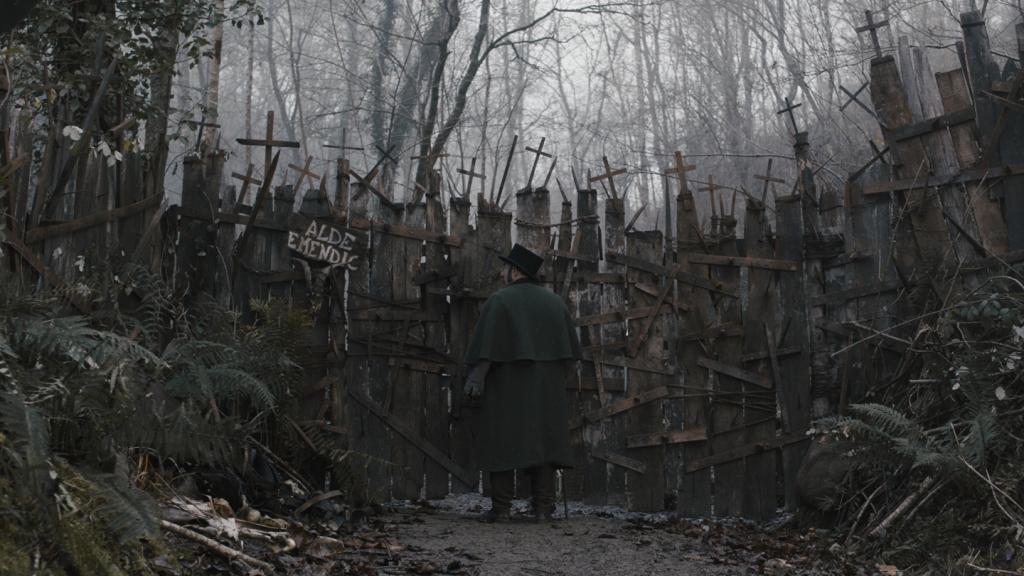 Hiding from the blacksmith, Usue finds a caged boy and sets him free. But Usue is fooled since the enslaved boy turns out to be a demon from hell. Few other predictable ‘secrets’ also come to light. Though the depiction of Sartael (Eneko Sagardoy) confirms to the clichéd demon archetype, the presence of this character brings a silly yet delightful dose of humor. Usue briefly finds a father figure in Patxi, and they both enjoy torturing the demon with chickpeas. Furthermore, the cheeky Sartael doesn’t turn out to be the real antagonist of the narrative. In fact, we even feel bad for this poor low-level bureaucrat from hell. This is where Errementari comes close to becoming a parody. But then it jumps back to fantasy-horror mode, meeting the genre demands with suitably moody set-pieces.

Director and co-writer Paul Arkijo obviously finds it hard to juggle between the horror and humor elements. The somber visual design and brilliant production design perfectly sets the stage for this horror-fantasy. However, the incongruous addition of demon Sartael offers more tickles than chills. Those who expect more menace and complexity from the plot might be disappointed by the later wickedly funny tone.  Yet the pulpy genre pleasures remain intact and even the slyly witty surface-level political commentary is delivered well.

Paul Arkijo is said to be largely faithful to Patxi Errementaria legend, a Basque mythology character. The iron cross, magical powers of bells are all elements taken from the folk-tale itself. The Basque are ethnic group from Southern Europe, their ‘country’ lies between parts of north-central Spain and south-west France. Probably the folk-tale uses the mask of fantasy to deal with social and political issues specific to Basque region of the era, which isn’t pronounced clearly in the narrative. Nevertheless, as I mentioned earlier the hostile environment of Errementari has universal resonance since the notions of good and evil always proves to be tricky.

Also Read: Haxan [1922] Review – A Bewitchingly Bizarre and Rationalistic Take on the Horrors of Middle Ages

Even without unnecessarily pondering on the thematic core of the Errementari legend, it was kind of exciting to watch a Basque language horror – a language and people ferociously oppressed by Franco dictatorship (1939-1975) that even speaking the language in public areas was once prohibited.