Visionary Danish film stylist and one of the pioneering masters of the silent-era cinema, Benjamin Christensen’s Haxan: Witchcraft Through the Ages (1922) is an ambitious and spellbinding feature-length documentary that included some artfully constructed dramatized scenes. It’s considered as the proto-essay film, a type of documentary later developed by the likes of Dziga Vertov, Chris Marker, and Jonas Mekas. Some other critics hail Haxan as the proto-horror movie, citing its shockingly effective imagery delineating witchcraft and demonology. Both horror and documentary didn’t exist as a genre during the year of its making.

But it’s important to note that Murnau’s Nosferatu and Robert Flaherty’s Nanook of the North released in the same year, which became the forerunners of the modern horror and documentary respectively (moreover, let’s not forget the 1920 eerie expressionist marvel, The Cabinet of Dr. Caligari). Yet even without getting consumed by the debates over Haxan’s genre or whether it’s a precursor to a particular genre (Mr. Christensen did two years research for the movie from 1919), the film can be unanimously heralded as an incendiary expose of religious persecution and a quasi-feminist exploration of the patriarchal tendencies, from the medieval to the modern times. 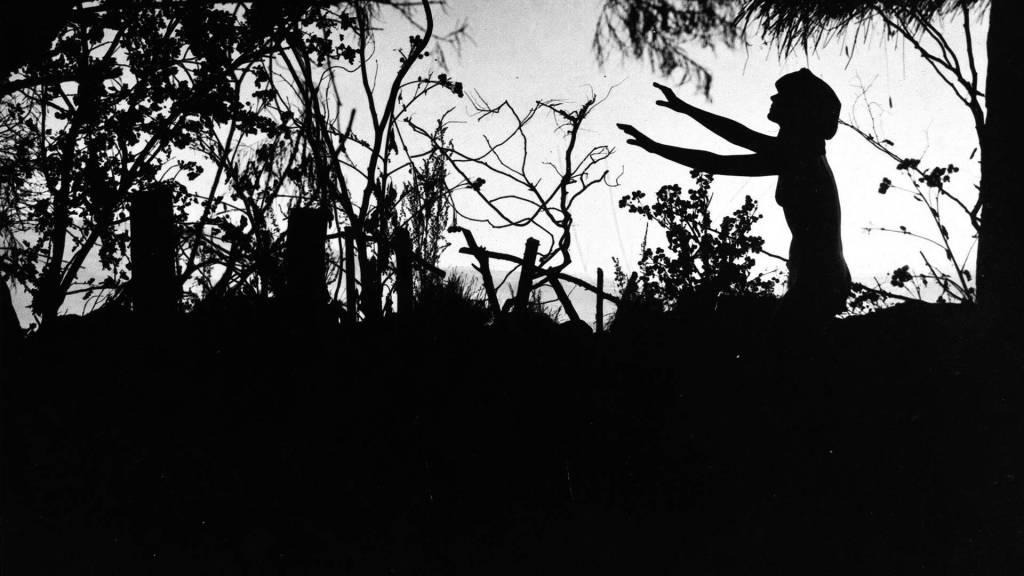 Director Benjamin Christensen (1879-1959) was born in a well-to-do family in Denmark. He dropped out of medical school to get trained as an opera singer. A nervous illness and intense stage fright put an end to Christensen’s success as an opera singer and a theatre actor. In 1912, he turned to directing and in the flourishing Scandinavian film industries, Christensen made The Mysterious X (1914) and Blind Justice (1916). Like his Scandinavian contemporary Victor Sjostrom, Christensen’s early silent film also showed a penchant for masterfully using natural light and shadow. He was also adept at employing complex transitional effects to visually convey his thesis [2].

Related to Haxan: The Phantom Carriage [1921] – A Startlingly Inventive Morality Play of the Silent Film Era

Haxan, his third feature film was also touted as the most expensive Scandinavian production of the time (made by the oldest Swedish motion-picture studio, Svensk Filmindustri).  The film premiered in Stockholm in September 1922, but it faced seemingly endless problems with censors in other countries, due to the anti-clerical message. The numerous scenes of nudity, occultist imagery, and sexual imaginations were reedited. Haxan gained a cult following after its re-release in 1941; supposedly an early ‘midnight movie’ (an independent screening culture between the early and late 1970s, ignited by the films of Kenneth Anger, Alejandro Jodorowsky, David Lynch, etc). In his subsequent emigration to Hollywood, Christensen made undervalued yet beautiful dramas (The Devil’s Circus [1926] & Mockery [1927]). He didn’t survive for a long time within the Hollywood studio system and returned back to Denmark in 1935 having failed to find enough backing to work as an independent producer-director.

From Polanski’s Rosemary’s Baby (1968) to Ari Aster’s Midsommar (2019), film-makers despite portraying their female characters as victims of gender oppression has presented the supernatural lore about witchcraft as ‘real’ within the narrative framework (some horror films have equated the ‘witch’ status with the persecuted female’s retaliatory actions). However, Benjamin Christensen’s strange and hybrid mix of history, fantasy, horror, burlesque comedy, and emotional drama argues that witchcraft is nothing but monstrous imaginings of the heavily superstitious medieval era. It emphatically states that people of the Middle Ages accepted witchcraft as an explanation of things they did not understand (and of course the same ignorance is still peddled, but only under different names).

It is true that Haxan’s folk horror imagery despite its ambiguity and intriguing objectivity comes across as a grimly fascinating spectacle that are at odds with Christensen’s intention to scrutinize the politics of culture and gender. Chloe Germaine Buckley’s rich essay on the movie argues that: “There is an obvious critique of women’s precarious status (it is dangerous to be old and ugly but also to be young and pretty), but Haxan also reinforces early modern stereotypes that are rooted in misogyny”. Homeless crones, seductresses, insane nuns, hysteric pyromaniac, noble wives, Haxan’s representational portrayal of women of the past and present are a bit paradoxical and confusing. Nevertheless, despite the flaws in the narrative discourse, Christensen’s Haxan is an utterly unique and highly imaginative silent film, shattering certain social, cultural, and religious conventionalities.

Divided into seven chapters, Haxan opens gently with a pedantic lecture, full of medieval woodcuts offering a crash course on how belief in witchcraft and demons were generated at a time when common folks had zero knowledge about science. The engravings repeatedly show witches and sorcerers trafficking with devils. Christensen follows it up with dramatic scenes with representative characters, which offers the iconic imagery related to the typical on-screen portrayal of devils and witches (from Terrence Fisher’s The Devil Rides Out [1968] to Robert Eggers’ The Witch [2015]). The recreation parts begins in a dingy lair in the year 1488, where an old woman stands over a cauldron stirring her portions, while another arrives with a bundle of sticks, a stolen finger (taken from the hanging corpse of a thief), and drops a little sack full of snakes and toads into a cauldron.

A woman comes knocking at the witch’s door to ask for a portion in order to seduce a pious man. Dark humor could be found in Christensen’s titles which announces the woman as ‘young maiden’, but she is a sexually repressed middle-aged woman, whereas the ‘pious man’ is actually a gluttonous, bug-eyed priest. The director sets off the first of his wild tonal changes as he cuts to the ‘young maiden’s’ fevered imaginings of the portion’s effect after slipping it into the drink of her ‘pious’ lover-boy.  The film moves between macabre imagery and charade in these early portions, but suddenly takes a disturbing turn in the vignette explaining inquisitors’ approach to witchcraft trials. In this particular episode, a printer falls ill and a priest treating him conducts a stupid exercise (which includes holding a ladle of molten lead over the afflicted man’s body) and declares that it’s a witch’s work. 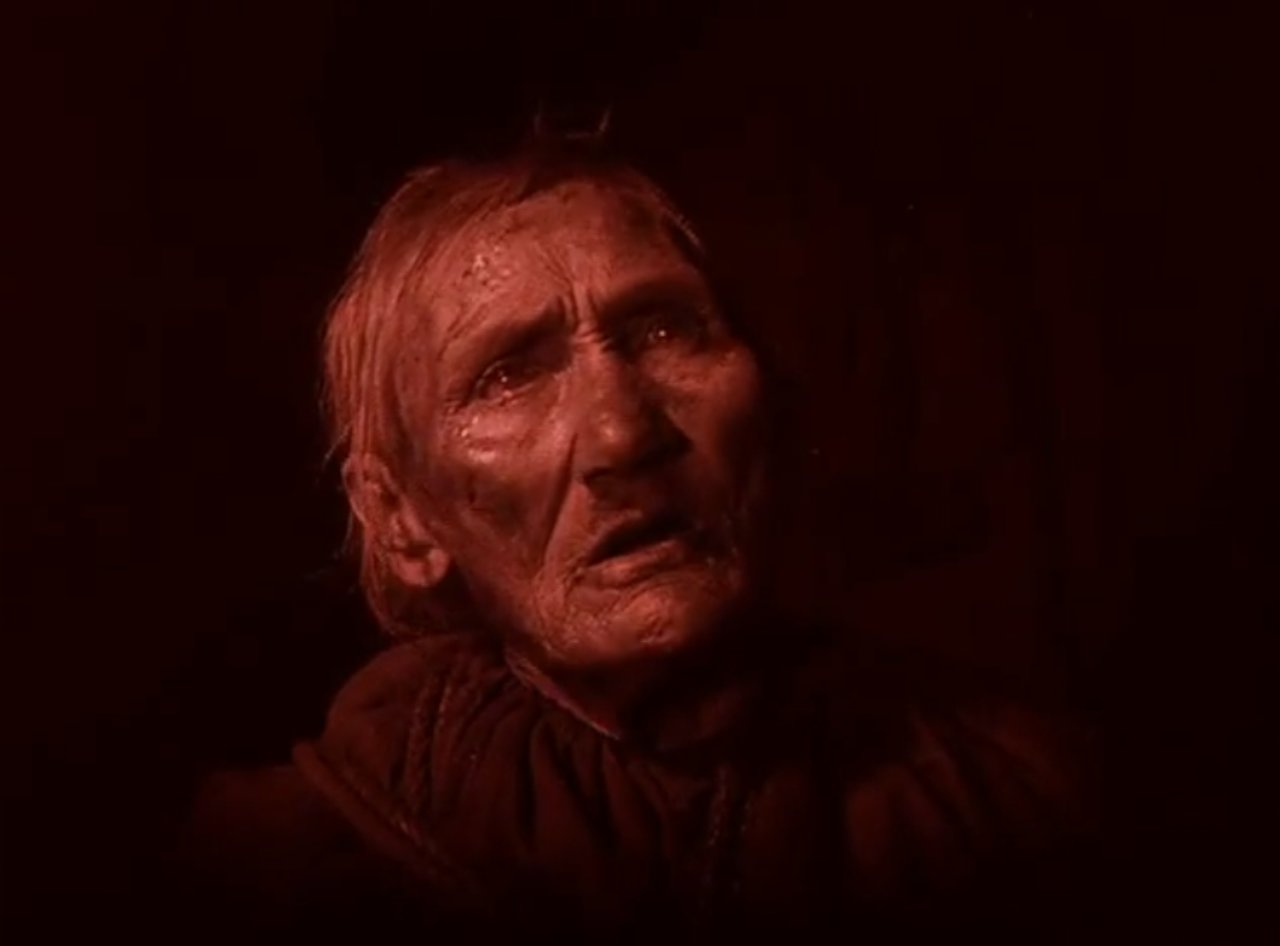 Spooked by the priest’s diagnosis, the printer’s family accuses an old beggar woman of witchcraft (Maren Pedersen). Christensen’s close-up shot of the frail, poverty-stricken woman shows her devouring the food bowl placed in front of her. The dirty visage, homelessness makes her an easy target of the Inquisition authorities. She’s dragged away from the printer’s home and confined to gruesome torture chambers to extract a confession. Although the episode’s staging initially starts off in a theatrical and sensational manner, Christensen gradually distresses and moves us through the depiction of an elderly woman’s suffering. An unsettling extreme close-up shot of the alleged witch, predating Dreyer’s painfully intimate close-ups in The Passion of Joan of Arc (1928), reveals how she’s a pawn, sacrificed to enforce rigid religious conformity. The elderly woman’s weathered face in Haxan is as haunting and indelible as Maria Falconetti’s.

In order to escape the torture, the old woman eventually ‘confesses’ to all sorts of transgressions, and in doing so implicates other women of the town, including the women of printer’s family. Christensen moves from historical to fantasy recreation, realizing the grotesque images detailed by the witch under the influence of torture. The Witch’s Sabbath is closely depicted, including the image of a dead baby put into cauldron to be cooked along with toads, witches flying over the town on their brooms, witches trampling the cross and kissing The Devil’s ass. The scenario keeps getting more distressing, especially when the bed-ridden printer’s wife, Anna (Astrid Holm) is taken away from her baby child and is accused of witchcraft. Christensen then demonstrates how the brutish man of the cloth extracts a confession from innocent Anna who doesn’t succumb to torture.

The following two narrative chapters in Haxan are comparatively light-hearted and ironic, but equally thoughtful. Christensen finds parallels between victims of witchcraft trials and the modern patients of mental disorders. Taking into account Freud’s psychoanalysis and study of female hysteria (which had a great impact on the early 20th century), the film-maker asserts that such disorders can now be identified and treated, although the social stigma surrounding mental illness remains more or less the same. The final episode is a tad pedagogical and some of its Freudian analysis are outdated, yet Christensen’s ironical, offbeat humor and juxtapositions are a marvel to watch. The director states witches no longer fly on broomsticks which he cuts to a young woman pilot taking off on a biplane. And in one of the other final statements, Christensen juxtaposes between the images of a hot shower in an insane asylum with witches burning at the stake.

What’s more intriguing in Haxan apart from Christensen’s unique approach to visual essay imagery is his breaking of the fourth wall and constantly addressing the audience. Some of these are humorous as when he says that his actress volunteered to tryout the medieval thumbscrew – “I will not reveal the terrible confessions I forced from the young lady in less than a minute”, says the title. However, Christensen also breaks the fourth wall for the sake of contemplation (through intertitles). Christensen informs us that the old woman, during a break, confessed to him about truly believing in the Devil. That sort of forms the basis for the film-maker’s imagery and thesis [4].

Christensen maintains that all these superstitious lore about the Devil are absolutely real for those who believe in him (out of fear or reverence). Maybe, the diabolic imagery describing Devil’s power (Christensen himself superbly emulates the sinful villain) is so bewitching that the film’s educational motives aren’t allowed to take the center stage. Yet despite the out-of-date treatise on ‘female problems’ and ‘carnivalesque’, ghoulishly entertaining depiction of Satan’s bacchanalia, Christensen deftly makes his case against the religious persecution that gobbles up dogma and shits on humanity.

Overall, Haxan: Witchcraft Through the Ages (104 minutes) is a groundbreaking hybrid of Gothic horror imagery and informative documentary.