Home»Reviews»Titli [2015]: A Terrifying Investigation of the Dog-eat-Dog World
Reviews

Kanu Behl’s Titli will give you nightmares for days. It’s terrifying, shocking and desperate in its attempt to show the naked truth behind the people who dig their own graves and create their own hell. A hell that would make Satan look down in distress, a hell that will make you feel squeamish and worried at the same time. In the midst of all the hip-hop and party-poppers, this little indie film manages to shake everything off. If you have a recent memory of a film that was hard to watch, this film will instantly take its place. Behl’s Titli is not even darkly funny, it’s just disturbing. Disturbing to an extent that it drains your blood and leaves you empty.

Coarsely detailed and overly vulnerable in its treatment of the characters, Titli is about a family of car-jackers from the underbelly of Delhi. Their address itself relates and reads ‘gutter’ and the half-complete house references their half-done life. Titli (Played by newcomer Shashank Arora) has the dream of buying a parking space for himself so that he can escape from the hell-hole that comprises of eldest brother Vikram, (Ranvir Shorey) whose sudden outbursts of physical and verbal violence has overflown its limit and Bawla (Amit Sial) whose loyalty towards Vikram, in spite of his focused head, isn’t helping him either. Will the addition of a woman completely limit him from even imagining a better future or will it make things hearty? 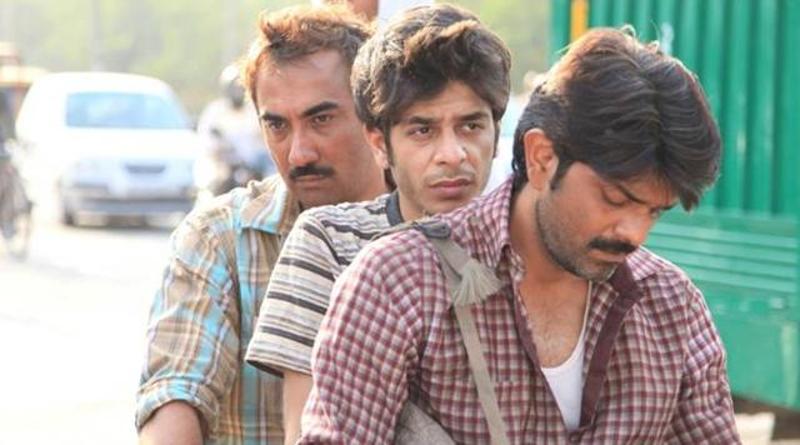 Titli is an engaging noir about the consequences of trying to survive in this world that has been monetized for worse. In a very bold and disturbing scene, we see a police officer giving out bundles of money for proper arrangements of his marriage, simultaneously pushing this family of thugs deeper into the mirage of criminal disillusionment. Titli is about escapism from a series of self-confused muddled relationships leading the disarranged self to the extremes. It’s about selfish dreams & about the pigs who just want to stay in the dirt, leading the other baby pigs on the same scribbled pathway.

Kanu Behl has presented a pitch black representation of a society & a system that is so endemically corrupt & self-absorbed that escapism is a fool’s dream. Behl has fetched out such brilliant characters that even their routine of brushing teeth gives out a near perfect picture of what they really are about. In these narrow claustrophobic lanes of lesser-known Delhi lies hopes & dreams & In their outburst and aggression, you see a certain vulnerability that cancels out calling them complete animals.

Titli is not a story of a dysfunctional family because calling these set of ruthless people dysfunctional will be an understatement. But even in this relentlessly downbeat tale of ghastly inane characters, there is a coming-of-age film that’s just looking for proper wings to fly away from the gun & the hammer. The title character, Titli (translates to butterfly), is not a butterfly because not even in it’s lightest moments you see any glimmer of beauty. But he is a spider who is hanging by a very thin thread of lies, betrayal and double-cross, and yet he is trying hard, not fall off.

Co-written by Sharat Katariya (Dum Laga Ke Haisha) & Kanu Behl himself, it’s their writing that makes Titli one of the best films of the year. They have managed to make the viewers sympathetic, not only towards Titli & Neelu (Shivani Raghuvanshi) who has her own set of desires & dreams but also with the two seamlessly unlikable brothers. Behl has also portrayed women in both the dark & strong lights. He shows how being strong in wayward situations is the only way out for them.

Ranvir Shorey, in a complete turn of events, has mammothly owned the screen for all his respective scenes. On one hand, you see him personifying patriarchy, abusing and slacking everyone on his tip-toes, on the other hand, you see him in complete splits, tearing up while signing his divorce papers. Amit Sial who plays the second brother to Title has been intentionally underplayed. There are slight undertones of gay leanings in his character, as he understands the femininity of things going around, yet resorts to obeying the power at hands. Lalit Behl who is also the director’s dad, quietly underplays, as he dips his biscuits in his chai, enjoying all the atrocities going on. He is the actual evil who worships the deceased father who was supposedly the same, in the chain of events. Shivani Raghuvanshi also shines in her role of a bold girl trapped in her own set of deception and lies. Her vulnerability out-washes her stupidity of considering that the world is still a good place to be in. Shashank Arora is brilliant. His dead eyes, battling eyelashes & sudden outbursts pave a way to make his character grow small & insignificant wings right up to the climax.

Final Verdict: Titli is an unflinching, riveting, dark & horrifying film. It will make you ponder at the various species of human-animals, simultaneously questioning your own existence in this hellish dump called life.