“Ideals are peaceful. History is violent.”

From a critical viewpoint, David Ayer’s last two films were antithetical to each other. End of Watch (2012) has come across as one of the best crime dramas in recent times, whereas Sabotage (2014) was a forgetfully bore action thriller. Heavily stylized & dramatized Fury (2014) falls just somewhere in middle of it. Fury depicts the horror of war quite well by taking us into the gritty war zone and by lambasting at the atmosphere of jingoism. The opening scene of Don ‘Wardaddy’ Collier (played by Brad Pitt) killing a German cavalry officer with a knife, then cutting his eye sets the tone of the film. Subsequently, Fury descends into the traditionalist war narrative which clearly reminds us of the WWII movies of the 1940s and ’50s.

In Fury, David Ayer does not take much effort in fleshing out the characters so that it can be deeply memorable. He rather focuses  more on the dynamics of relationship between each individuals. Of course, this makes Fury quite engaging for its entire running length. We have Wardaddy leading M4 Sherman “Easy Eight” tank named Fury along with the gunner Boyd (Shia LaBeouf), a thoughtful lad who knows his Bible. There’s also loader Grady (Jon Bernthal), a swaggering macho guy in need of some dental work. And finally there’s the driver Trini (Michael Pena ). 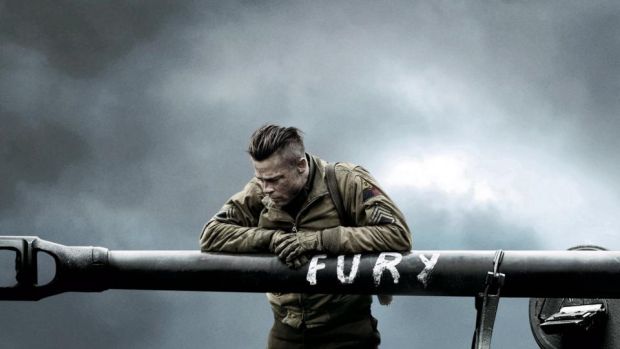 David Ayer smartly throws the new character of amateur typist into the battlefield that it brings the much needed vulnerability & humane aspect to the drama. Moreover, it bestows an empathetic point of view to the War arena.  All the veterans find an scapegoat to have fun at the expense of Private Norman Ellison’s inclusion in the team. The young guy is harassed, bullied and becomes the object of obnoxious rude remarks.

In one of Fury’s best scene that will linger on one’s mind for a long time, Don and Norman, having secured a German town, relax in an apartment occupied by Irma (Anamaria Marinca), a middle-aged German woman. She lives with her younger cousin, Emma (Alicia von Rittberg). Irma makes lunch for Wardaddy, who sends Norman off to the bedroom with Emma. The implication of sex is apparent. Then the other tank troopers barge in. This creates an undercurrent of menace and unrest that seemed to end up in feud.  The levels of fear and tension and despair in this scene are palpable.

Brad Pitt as the fearless soldier carries the film with his hoarse charisma and  rugged looks. Fury could have stumbled under the burden of its cliches or conventions. But the magnificent tank battle sequences, Pitt’s brilliant performance, the German town scene and the last thunderous battle sequence makes this uneven film worth a watch.