“The Phantom Carriage was based on Nobel-Prize winning Swedish author Selma Lagerlof’s 1912 novel, Thy Soul Shall Bear Witness!”

Known as the Father of Swedish cinema, Victor Sjostrom is one of the greatest of all silent-era film-makers. Between the years 1912 and 1922, Scandinavian cinema entered a period of artistic innovation and produced some of the masterworks of the silent-era cinema. The Dane Benjamin Christensen (Haxan, 1922) and the Swedes Mauritz Stiller (Sir Arne’s Treasure, 1919), Victor Sjostrom (Ingeborg Holm, 1913) were the most artistically successful Scandinavian directors of the period. Although it was the early stages of narrative cinema, different stylistic trends were adapted by film-makers around the world.  Hollywood cinema pioneered in making sensational pictures as German cinema was preoccupied with Expressionism and impressionist cinema flourished in France. The Swedish cinema of this era was defined by its ‘naturalism’.

Instead of exclusively shooting inside an artificially lit set and interior spaces, the Swedes fine-tuned the technique of light diffusion (utilizing bounced natural daylights). Also, the grace with which they captured the natural landscapes brought upon a beauty to the imagery unlike other silent-cinema movements (later, the Swedish cinematographer Sven Nykvist from the 1960s – Ingmar Bergman’s closest collaborator – became a master in using the natural light). In fact, the first thing that strikes you while watching Victor Sjostrom’s 1921 masterpiece The Phantom Carriage (Korkarlen) is the magnificent interior lighting and the perfectly symmetrical exterior shot compositions. Apart from the brilliant superimpositions done to highlight the ghostly realm, Sjostrom and his cinematographer Julius Jaenzon perfected certain early cinematographic techniques (especially when transitioning between two shots). 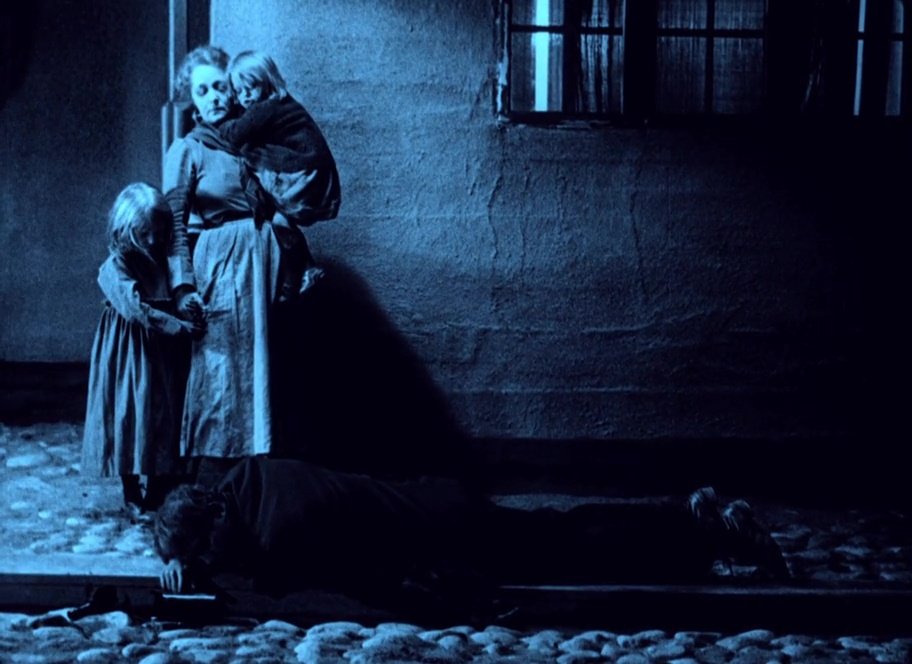 The Phantom Carriage was based on Nobel-Prize winning Swedish author Selma Lagerlof’s 1912 novel, Thy Soul Shall Bear Witness! It’s a dark fairy tale of sorts that draws a bit from Charles Dickens’ celebrated 1843 novella A Christmas Carol. Carrying a mood of spiritual austerity (which was also perfectly put to use in this film-making era by Carl T. Dreyer) the film deals with themes of destiny, guilt, redemption, and morality. Perhaps, it’s also one of the earliest movies to realistically depict the negative effects of alcoholism. The Phantom Carriage is set on New Year’s Eve. It tells its story through a series of flashbacks that gradually reveal the protagonist’s grim predicament.

Related to The Phantom Carriage: The Kid [1921] – The Most Poignant of Chaplin’s Silent Masterpieces

The Phantom Carriage opens with good-hearted Salvation Army nurse Sister Edit (Astrid Holm) nearing her death. Suddenly, she sits up from her deathbed and asks for David Holm (Victor Sjostrom). Edit’s friend looks for him, but only finds the despairing Mrs. Holm (Hilda Borgstrom). The somber mood within the interior spaces is channeled to the exterior spaces too as the sequence cuts to a cemetery, a distant yet towering clock tower indicating that the New Year is almost there. In the cemetery, David Holm is having a drink with his buddies and narrates a strange story told to him by his dead friend, Georges (Tore Svennberg).  Georges claims that the last person to die each year must take over the role of Death’s driver, riding a ghostly wagon to collect the souls of those who pass away.

The ghost-like effects of a death figure carrying scythe were boundary-pushing for its time. The camera trick might date back to the magic films of George Meiles, but here it was used more effectively to convey the intrusion of the spiritual world (of course, it occasionally looks gimmicky). In one sequence, Sjostrom innovatively stages Death’s driver’s visit to the depths of the ocean to collect a soul. David finishes the story by adding one spooky detail; that Georges died just before last New Year’s Eve. Soon, David engages in a drunken fight with his equally degenerate pals. He is accidentally killed and as expected Death’s incumbent driver Georges visits David to hand over the reins.

The rest of the running time David’s spirit revisits his grim past and the misfortunes he brought upon his wife and their two little children. The flashbacks are also intercut by the time after David has been visited by the phantom carriage. So the superimposed, semi-transparent David’s spirit sees Edit’s death and also helplessly watches over when his wife decides to kill herself and their children.

The flashbacks in Phantom Carriage that recall David Holm’s callous behavior are the narrative’s strongest portions, enlivened by impeccable performance by Sjostrom himself. Georges feels guilty about causing David’s alcoholic addiction. He reminds David of a tranquil life he once led with his wife, two children, and younger brother (Einar Axelsson). Daivd Holm is a happy man here, enjoying a picnic with his brother and family. The shot immediately dissolves to replace family members with his drinking companions, and elegantly realizes the man’s miserable transformation. Some of the imagery has the power to speak across time. For example, the image of grief-stricken Mrs. Holm standing in the street with her children as the inebriated David Holm is down on the ground.

Sjostrom also found a way of moving seamlessly from a wide visual frame to medium shots (which he does quite a few times). As critics have often cited, what’s interesting about these shots of seamless transition is that many of these cuts are planned at the script stage, and not just appended at the editing table. The Russian nesting-doll like structure gradually thrusts upon us David Holm’s shocking downward spiral.  In one of the film’s tragic scene, David upon completing his short prison sentence is brought into a tiny cell. The cell’s occupant is David’s own brother, also afflicted by alcoholism. The brother has accidentally killed a man under the influence. The chaplain appeals to David to seriously consider his obligations to the family. The scene was classically shot, the grief and anguish of the characters are expressed with a restraint. 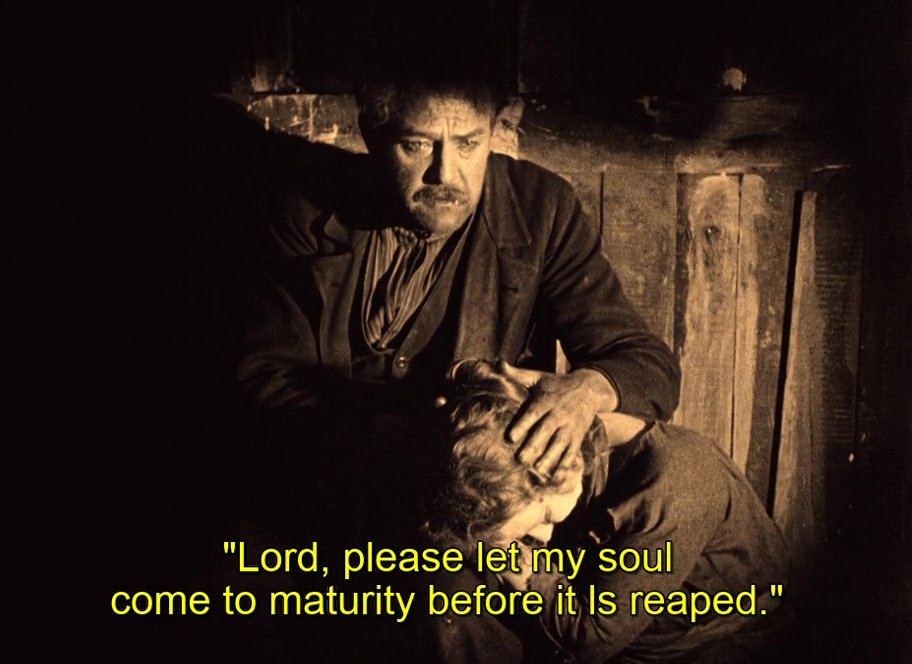 However, the lesson he learns goes to waste when immediately upon release David finds that his wife has taken their children and left him. Now he sees himself as the victim and unflinchingly decides to take up the position of a victimizer. The desertion makes him even more vicious and bitter as it is seen in his first encounter with Edit. The most memorable of David’s brutish behavior is when he takes an ax and smashes a door in an effort to stop his wife from deserting him again. The cuts between David axing his way through the door and his wife’s attempt to escape superbly emphasize tension in the narrative flow.

The scene influenced a key moment in Stanley Kubrick’s The Shining (1980), where the psychotic protagonist had planned to use the axe for more than just breaking down the locked door. The Phantom Carriage’s influence was felt deeper by the best Swedish film-maker of all time, Ingmar Bergman. Mr. Bergman was just three years old when Phantom Carriage was made. Nevertheless, the film had an enduring impact on Bergman that he personified Death in his 1957 classic The Seventh Seal. More importantly, he casted Victor Sjostrom as the lead actor in Wild Strawberries (1957), a film about an aging professor overwhelmed by the emptiness of his existence. In 2000, Bergman directed The Image Makers, a Swedish television play that is set in 1920. The play touches on the creative process behind the making of The Phantom Carriage.

The film also seems to have had some impact on Frank Capra’s It’s A Wonderful Life (1946). Although The Phantom Carriage lacks the cheery optimism and tear-jerking sentimentality of Capra’s picture, both films were about men getting a chance to review their life under the shadow of death. The protagonist’s nature and the lessons they learn, however, are entirely different.  One learns about the ignominy of his existence, whereas the other witnesses the grimness brought upon by his non-existence (of course, eventually both the films conveys the timeless message of treasuring the gift of life).

Victor Sjostrom made The Phantom Carriage at a time Swedish national cinema was on the decline, particularly due to tough competition from Hollywood. By 1923, Sjostrom received an opportunity to work in Hollywood, for the Goldwyn Company which anglicized his name to ‘Seastrom’. The director made three masterworks among the ten features he made in Hollywood. Those were: He Who Gets Slapped (1924), The Scarlet Letter (1926), and The Wind (1928) starring the great Lillian Gish. But in my humble opinion, The Phantom Carriage (107 minutes) is Victor Sjostrom’s visionary masterpiece as he balances here between complex, elliptical storytelling and acutely lyrical imagery.

How "Thappad" Champions An Inclusive Screenplay of Empowerment, Exploration, and Realizations