Every time I revisit Charlie Chaplin’s first feature The Kid (1921), the cynical part of my mind scoffs at the happy ending. The Tramp is greeted by the wealthy Woman and gets reunited with his beloved John, who welcomes the Tramp into his new, bigger home. Even the bullying policeman loses the chip on his shoulder and gleefully shakes hands with our eccentric, toothbrush mustachioed hero. But despite the limitations defined by such an exceedingly hopeful ending, The Kid’s power, and timelessness can be attributed to the things that are not easily explainable – our emotions. Author Mark Cousins in the book The Story of Film says, “It is possible to see The Kid and hardly laugh”. But what’s impossible is seeing the movie and not cry.

We can’t stop from feeling that tug at the heart when little John calls out for the Tramp from the back of a wagon (his fingers clawed, the panic palpable in his face). What’s more unlikely is to not shed tears of joy when the Tramp takes up a daring rescue effort and gets reunited with the boy. The depth of feelings you feel at those moments is something that can’t be expressed through mere words. It’s what makes The Kid one of the ‘aesthetically significant’ works of silent-era cinema. In the years after Chaplin made The Kid, cinema has taken giant leaps and brought upon incredible details to its imagery. Yet it would be a Herculean task to bestow the deeper emotional authenticity Chaplin’s heartfelt images achieved here.

In 1912, in California, the Canadian-American director & producer Mack Sennett opened Keystone Studios which was considered to be the first film company that solely made comedies. Mr. Sennett was revered as the father of slapstick cinema. In the same year he co-founded the Keystone Studios, Sennett saw Charles Chaplin on a stage and hired him. The legend says that one fine day in 1914 Chaplin donned the comedy make-up to instill few laughs into an otherwise somber shooting of Mabel’s Strange Predicament. The momentary thought Chaplin had while walking to the wardrobe may have been the origin point to realize the most celebrated character in cinema. But The Tramp’s evolution happened gradually, particularly the way the character blended pathos and slapstick. Of course, the stories of Tramp’s easy birth shows how we flatly reduce a very complex gestation and filter it for the sake of a supposedly inspirational story. 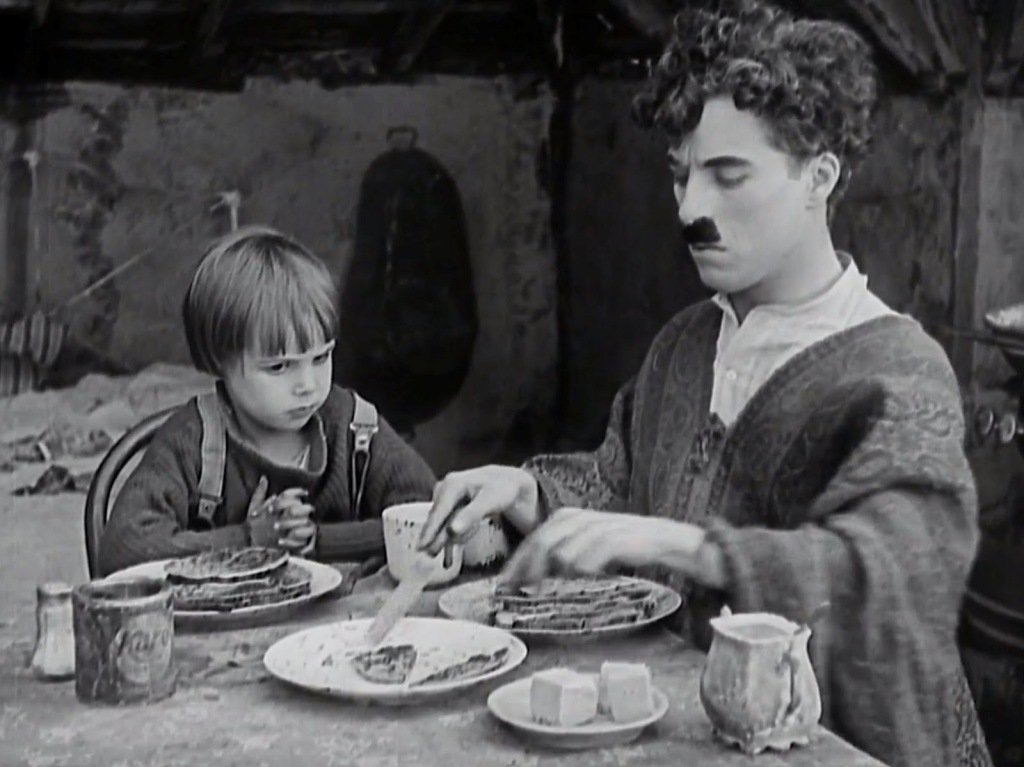 Chaplin left the Keystone by 1915, and soon became a star through his two-reelers (short films that runs around twenty minutes). By 1917, his annual salary was $1 million, and most importantly he gained full creative control of the films he made. Soon he got the idea to have his own production and releasing company, and also effectively juggled between the roles of actor, writer, director, editor, producer, and composer. Chaplin co-founded United Artists Corporation in 1919 with the then powerful representatives of American silent cinema such as film-maker D.W. Griffith and stars Mary Pickford & Douglas Fairbanks. While with the two-reelers Chaplin perfected the art of assembly-line production methods, his ambitions as an artist only grew bigger. The result was The Kid, which was in production for nearly 13 months, something totally unprecedented at that time.

Related to The Kid: I Was Born, But… [1932] – A Captivating and Subtly Incisive Silent Comedy about Childhood

Ever the perfectionist, Chaplin borrowed $500,000 and kept reshooting the scenes for months to realize the look and effect he was striving to achieve. In fact, the shooting ratio for the film was 53:1, i.e., the amount of total material shot to the footage of the final film (unheard of for a scripted production in 1921). The experiment, however, paid off greatly and the rest, as they say, is history.  On the personal front, by the time Chaplin immersed himself into The Kid’s production, he was wrecked by the loss of his newborn child (in July 1919). Moreover, it is obvious that the imagery and story of The Kid is derived from Chaplin’s own memories of his childhood (in the 1890s London). Even the small room inhabited by the boy and fatherly Tramp was said to be based on a place Chaplin lived when he was a kid.

Charlie Chaplin introduces The Kid as ‘a picture with a smile — and perhaps, a tear’, signaling the narrative’s driving force: pathos and humor. The film opens with The Woman (Edna Purviance, who appeared in 33 of Chaplin’s productions) carrying her baby son. She’s an unmarried mother as the title card informs, “whose sin was motherhood”. She abandons her baby with a simple hand-written note: “Please love and care for this orphan child”. She has a change of heart although her child is now really lost. After a series of mishaps, the baby falls under the care of a poor tramp, who is initially wary of accepting the foisted fatherhood. Eventually, he warms up to the idea, and names the baby ‘John’.

Five years later, the tramp is still leading a hardscrabble life, but loves being the foster father to the ever-energetic John (Jackie Coogan). Coogan not only gave one of the liveliest child performances in the movie history, but also proves to be the best screen partner for Chaplin. Dressed in ragged, oversized clothes, Coogan is basically the miniature version of Tramp. After ingeniously realizing the ramshackle domestic life of the duo, we see them getting ready for the job. The Tramp has employed his precocious kid to break windows in a selected neighborhood so that he can reglaze them. The proverbial Chaplin-esque lighthearted comedy ensues when they both try to dodge a policeman on the beat.

Despite making money through a duplicitous scheme, it seems the tramp has tried to do well by the child. John takes up the responsibility of cooking pancakes, says grace before meals. In short, the boy is inherently good and civilized. Meanwhile, we learn that The Woman, John’s biological mother, is now a wealthy opera star. But she still yearns for her lost child, and assuages her pain by being charitable to the slum children. In the second-half, when the boy falls ill, the tramp calls for a doctor, who upon learning the truth notifies officials to take the boy to an orphanage. This leads to the aforementioned gut-wrenching sequence. The sequence ends with a beatifying close-up of Coogan and Chaplin’s face pressed together.

Their reunion, however, is short-lived as John is handed over to his mother (obviously, the hand-written note is a vital framing device). What follows is a strangely interesting dreamland sequence, in which the then 13-year-old Lita Grey plays the ‘flirtatious’ angel (whom Chaplin married three years later). This dreamland scene adorned with religious imagery, although disrupts the narrative tone a bit, directs its focus on the film’s underlying themes of innocence and morality. And as expected, this is followed by a simple yet elegantly shot final reunion between John and The Tramp. 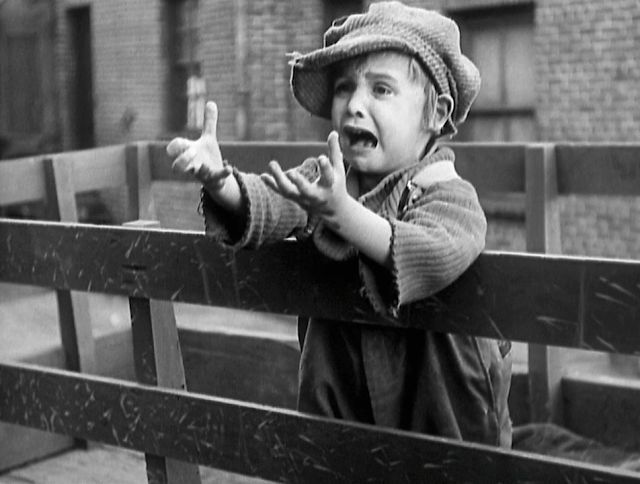 Its undeniable truth that the strong on and off-screen relationship between Coogan and Chaplin helped create the perfect parent-child closeness. When a week’s work at the studio finished, Chaplin took the kid out on a Sunday to visit amusement parks and circus. In the light of his own deprived childhood, film scholars argue that this was more than an exercise on Chaplin’s part to build trust and love with Jackie Coogan. Coogan played Oliver Twist in the 1923 production and was a considerably successful child star. Nevertheless, misfortunes followed him, similar to the ones that plagued the later decades’ child stars of Hollywood. When the adult Coogan was going through tough financial times, the California legislature passed Child Actors Bill aka Coogan Act to protect the earnings of child actors by setting up trust funds.

Also Read: Little Fugitive [1953] – An Endearing Snapshot of an Age and Time

Chaplin is clearly at his expressive best when he tries to portray The Tramp’s poverty. Be it the make-shift cradle or the nightgown he fashions out of an old blanket, he efficiently showcases the poverty-stricken household. Although a bit disconnected from the narrative, Chaplin mocks the society’s traditional morality in a scene involving Charles Reisner’s bully character (after a delightful child boxing sequence). The bully keeps trying to land a blow on the terrified Tramp, who just manages to save himself by ducking and dodging at the right time. The bully wants The Tramp to take up the punishment for John winning the fight with the bully’s younger brother.

At one point The Woman appears and speaks of Christian compassion (‘to turn the other cheek’) to the bully . But The Tramp uses such traditional (impractical) morality to his own advantage to deliver some hurtful punches. The slapstick scene jeering at such unsuitable norms of morality sets the stage for the big emotional scene, where the authorities – the official bearers of traditional morality – intrude upon The Tramp & kid’s haven to pull them apart. Perhaps, such societal conventions are deeply entrenched on The Tramp’s mind so that he dreams of a heaven which is equally artificial and operates on binary worldview (angel-devil, innocence-corruption). Or maybe the dream didn’t end for our Tramp even when the surly policeman shakes him up and takes him to John’s mansion.

The happily-ever-after ending is also mildly ambiguous. I mean what can The Tramp do now that the kid has got a rich mother? Maybe he could go in search of a gold rush in order to escape the mad circus of the capitalist modern times. Well, it’s a pointless question anyway. Because as long as empathy keeps flowing in our hearts, The Kid & The Tramp’s heartfelt connection will remain the same, untouched by time.