Yasujiro Ozu’s movies are often about families undergoing transition. His static, low-angle and distant vantage point subtly captures significant life moments sans melodrama. Although Mr. Ozu has had an illustrious directorial career extending back to silent-era, he was best known for his post-war ‘home dramas’ (starting with 1949’s Late Spring), the period in which the film-maker developed a unique mise-en-scene (with minimalist yet fascinating details), further strengthened by his unparalleled treatment of urban, middle-class domestic space. However, Ozu has engaged himself in making dramas about every-man (or to be precise, the Japanese salary-man) from his silent movie days. What separates these early Ozu classics from the formally remarkable later movies is the influence of silent comedy directors like Charles Chaplin, Ernst Lubtisch and Harold Lloyd. In one of his renowned earlier works, I Was Born, But… (1932), Ozu expertly blends lighthearted comic tones with serious adult themes. About this film, Ozu has remarked: “I started to make a film about children and ended up with a film about grown-ups, while I had originally planned to make a fairly bright little story….”

I Was Born, But… unfurls from the perspective of two little brothers — Keiji (Tomio Aoki) and Ryoichi (Hideo Sugawara) – who has freshly moved to the suburbs with their salary-man father, Yoshi (Tatsuo Saito) and homemaker, mother (Mitsuko Yoshikawa). As the title implies, a feeling of uncertainty and frustration follows the two kids, suggested by the film’s opening shot of the moving truck carrying the Yoshi family’s things is stuck in the mud (Ozu has emphasized on such ‘periods of uncertainty before full-transition’ through similar film titles like ‘I Graduated, But…’ (1929) & ‘I Flunked, But…’ (1930)). The boys are bullied by a gang of neighborhood kids, flexing their authority on playground and schoolyards. One big and mean kid beats them up and makes a hand signal that forces the kids under his authority to lie on the ground. Meanwhile, Yoshi is happy to have taken up the managerial position and live in the same neighborhood as his boss, Mr. Iwasaki (Takeshi Sakamoto). 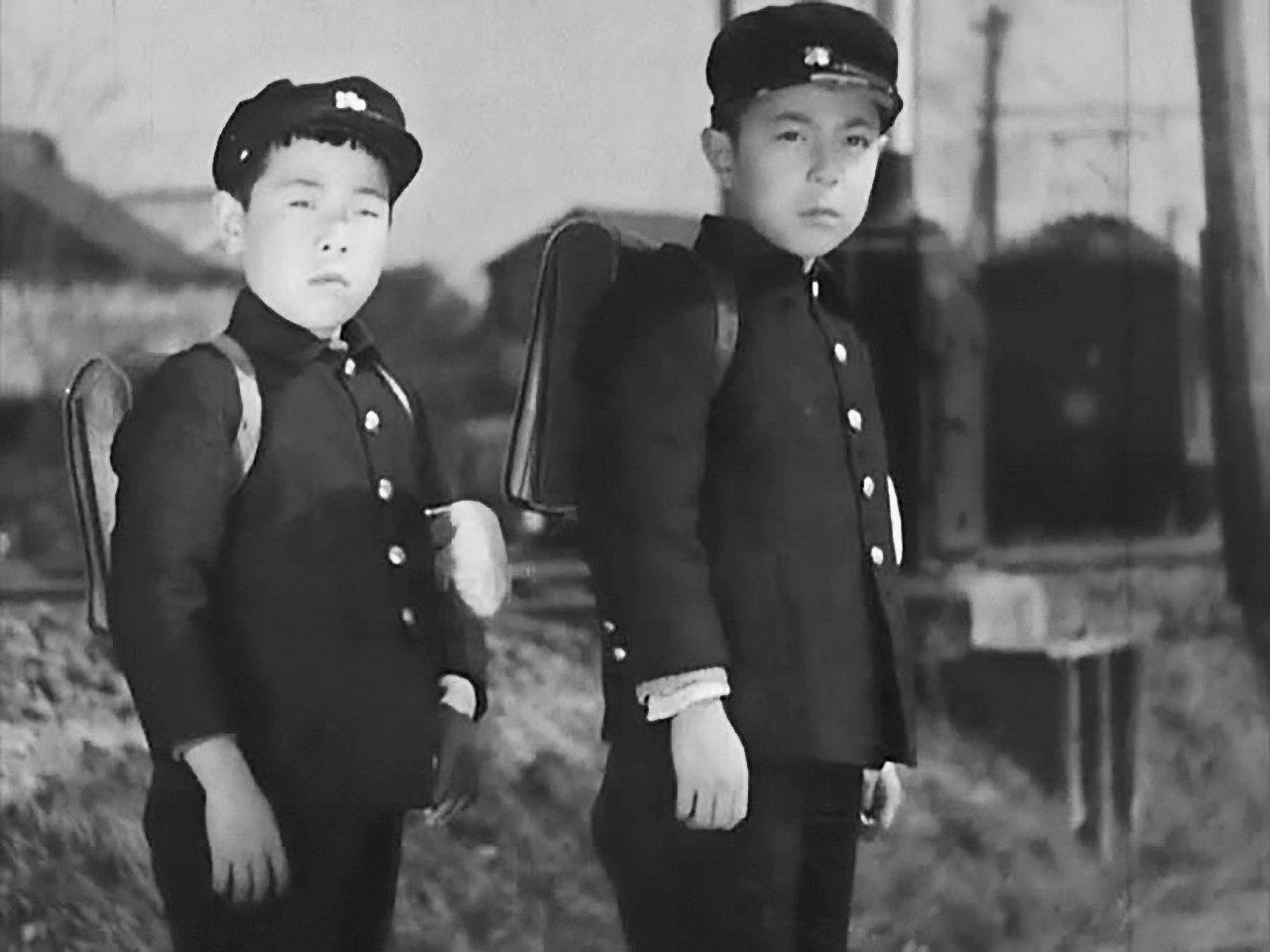 One day, Keiji and Ryoichi flunk school, but when their father learns of this he gives them a stern lecture on the importance of school and education. The boys go to school the next day, but it’s not their dad’s counsel that helps them to overcome the bullies. They recruit a teenage boy who delivers sake to houses in the neighborhood for their side to give the bullying ring-leader a taste of his own medicine. Soon, Keiji and Ryoichi make the same hand signal, causing the kids to lie and rise as per their command. Among the kids who have succumbed to the brothers’ authority is Mr. Iwasaki’s kid (Seiichi Kato).

Similar to I Was Born, But… — The Only Son [1936] : The Characteristic Ozu Style at its Nascent Stage

Nevertheless, the boys’ efforts to settle down in the neighborhood are jolted one afternoon, when the gang of kids gathers in Iwasaki’s manor to watch his home movies. Mr. Yoshi is also sitting by his boss’ side to watch the same. In some of the home videos, Yoshi plays the clown under Iwasaki’s direction, which instantly alters the brothers’ perspective of their father. Back at home, Keiji and Ryoichi in a very child-like manner express their inability to reconcile themselves the image of father they have with the goofy one captured in the videos. They can’t understand why Mr. Iwasaki should hold a superior position over their dad. Ryoichi angrily shouts, “You’re a nobody!” for which he receives a beating. But, Ozu follows it up with a poignant moment, where Yoshi confides to his wife that he is also unhappy about the situation. He also hopes that the boys would have better prospects. Even though Ryoichi and Keiji start a hunger strike, their combative attitude doesn’t last long. I Was Born, But… ends with the boys acknowledging the implacable social order to some extent.

Ozu maintains the lighthearted tone throughout I Was Born, But… by showing the kids goofing around the neighborhood (making faces and striking odd poses), including that ‘raising the dead’ hand signals. The film-maker provides insights on the boys’ behavior without relying a lot on the histrionic motions of silent cinema. The chief emotional pull is Keiji and Ryoichi’s everyday struggle to come to terms with the suburban life and wider social order. The fixation for obtaining physical power (by consuming sparrow eggs), the desire for embracing tough-guy posture are all the universal and timeless aspects of boys growing up in modern capitalist society.

The script written by Akira Fushimi, developed from Ozu’s story idea (penned under pseudonym James Maki), perfectly uses the comic surface to scrutinize various social themes including male bonding, the integration of free-spirited kids into strict social order, and the ubiquitous influence of economics in life. From an aesthetic perspective, I Was Born, But.. contains some of Ozu’s well-known motifs like trains (seen passing Yoshi home), wires, fences, and clothesline. The trademark low angle shots are more appropriate for this movie, since the narrative has to do with the viewpoint of children. However, unlike his later works where the camera is fixed, Ozu employs some remarkable tracking shots, especially the one that follows office workers yawning one by one. This particularly shot is preceded by a scene of school students undertaking daily exercise, which the essay by John Berra – in the book Ozu International – interestingly sees as a ‘link between the current education system and the type of life that it is likely lead to.’ 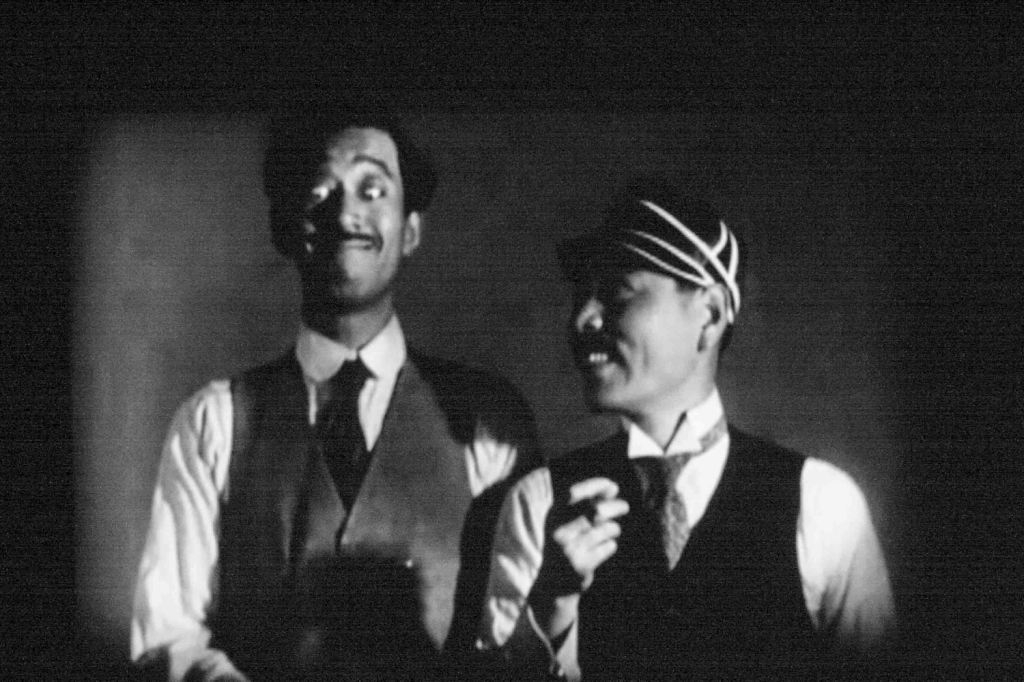 Among his silent movies I Was Born, But… has the most remarkable visual pattern, which Ozu gradually sharpened in his post-occupation cinema. The director’s treatment of domestic space here is more impressive, the white picket line surrounding the Yoshi family’s abode becomes as much a sign of their social mobility as their restriction within the new social order. The suburban space the film is set is part of housing expansion that commenced in an effort to restore Tokyo after the Great Kanto earthquake (of September 1923). We see rail line connecting the residential areas with the nearby commercial district. The suburban space offers coziness and access to things associated with upward mobility. Yet the suburbs also bring forth conflicting value systems that make the transition a bit harder. Hence, Mr. Ozu’s thematic treatment speaks specifically to Japanese audiences of the 1930s through the confusion and disappointments faced by the kids during this transition is rendered in a timeless manner.

Also, Read — Silver Bear Winner Angela Schanelec on “I Was Home, But” (2019), Interview

Ozu also smartly implies the changing dynamics between the father and boys through the shots of them walking from home to their respective destinations: office and school. Early in the narrative, the boys walk by their father’s side with a sense of pride. The day after the father reprimands his kids for skipping school, the boys are seen walking behind, painfully aware of their dad’s authority. By the end, the father walks behind the kids, who are sympathetic to him although their idealized image of strong patriarchal figure has vanished. While Ozu has addressed the big disappointment the suburban living has brought to the boys in the early scenes, the ending suggests the boys have learned to love their father (by recognizing the hierarchy in place) instead of keep projecting an idealized view of him. There’s no promise of life getting easier for the family, but the parting shot expresses what every great Ozu family drama subtly conveys: life goes on.

Antigone [2019]: 'TIFF' Review - A disobedient voice to the absolutes of state