She is a worthy successor to the several European avant-garde filmmakers, such as Chantal Akerman, Germaine Dulac, Robert Bresson and Michelangelo Antonioni. Long laconic takes with striking visuals and non-existent of the formal plot have become part of Schanelec’s filming grammar.

Interviewer: With I WAS AT HOME, BUT…, the title reminds one of Ozu, but also of your first mid-length film which you made in the early 1990s: I Stayed in Berlin All Summer.

Angela Schanelec: True. This title and also the new one sounds as if it were simply a report of something that happened,  which I like. But without Ozu and I WAS BORN, BUT…, I wouldn’t have come up with this new title. For me, the closeness to him is an antithesis to reality, film as invention, as pure form.

Interviewer:  The invention is: a boy had disappeared and reappeared. He is dirty, you can conclude from the condition of his clothes and skin, he was probably in contact with earth, nature, perhaps in the forest,  but you don’t see that instead, the film begins with animals. A dog chases a rabbit, later he eats it.  This happens in an abandoned house, there is also a donkey watching the dog eating. Then the dog rests at the feet of the donkey.

Angela Schanelec: Yeah. You can guess where the boy was, there are clues. The place itself can’t be depicted with a concrete setting at the beginning of the film, because for me it’s a kind of fantastic place. 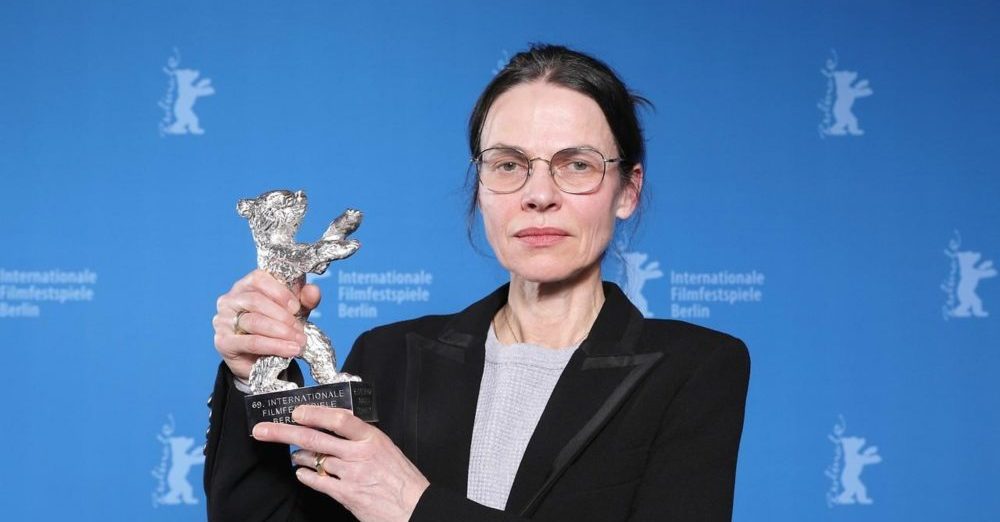 Interviewer: That is, you see the boy, his name is Phillip, only when he appears again, at dawn in the schoolyard. The film then tells what happens during the days and weeks following his absence. The mother buys a bicycle, but it breaks and she tries to get rid of it. Phillip goes back to school and performs a play by  Shakespeare with his class: Hamlet. It becomes clear that Phillip’s trip has consequences: He is sent to the hospital with blood poisoning. The mother has no more influence, no control, which drives her to the brink of despair. Meanwhile, Phillip remains calm all the time, tender to his sister, certain of himself.

Angela Schanelec: Yes, he may be unpredictable, but he’s sure of himself.

Interviewer: Phillip’s teachers also play a role, one of them would very much like to have a child. His girlfriend delivers newspapers early in the morning and he accompanies her to talk to her about it. But she does not want a child and it is difficult to convince her. They also go to the museum together where they run into Phillip’s mother.

Angela Schanelec: Yes, she met her students there. She teaches at an art college.

Interviewer: This means that on the one hand life continues on the sketched out, very everyday paths, but on the other hand there is a deep confusion that questions this life. It seems to me that everyday life is always based on slight despair, which sometimes leads to strange situations, for example when the mother tries to get rid of her broken bicycle or calls the teaching staff (the ‘teaching body’) a radiator (a ‘heating body’).

Angela Schanelec: Sure, it’s quite funny. The comedy lies in the efforts that are made in the very human attempt to make oneself halfway understood. The mother finds that more and more difficult. The situations seem crazy, almost unreal. The Hamlet scenes, which the class plays, are also connected to this. The mode of expression seems so strange and at the same time natural that the accustomed normality is lost for the moment of the play.

Interviewer: You have acted in the theatre for a long time and have also repeatedly addressed theatre in your films.

Angela Schanelec: Yeah, I’m interested in acting. What can one play and what only comes into being through the gaze of the camera? How can we even comprehend a person whom we have seen on the screen or on the stage in front of us?

Interviewer: In about the middle of the film we learn that the boy’s father died not so long ago. One can also read the film as a result of this experience of loss.

Angela Schanelec: Maybe, but I see this experience as something that is a part of life itself, something that goes without saying. The film also doesn’t take place immediately after the death of the father, but there is already a form of living on, also an adaptation to it. However, there are also consequences that one cannot anticipate or evaluate, you just have to experience them.

Interviewer: The experience that the boy has had during his absence from home, you do show this, or at least suggest it. In the end, he takes his mother and liable sister with him to the place where he was.

Angela Schanelec: You see them in the end in a place, which, yes, is very beautiful, somehow perfect. They rest there before moving on.