Hye-Reong Park’s absorbing documentary The Wandering Chef (2019), on the outset, sounded a bit like an episode of Man vs Wild: a man wandering around the Korean Peninsula in search of unique ingredients known for their medicinal properties. And yes, this happens to be his sustenance and survival strategy, but in a wholly different and beautiful way (forget the excitingly scripted ‘reality’ of survival TV shows).

The man is Jiho Im, a renowned Korean chef, whose distinct recipes have been the lifesavers for celebrities and authors. Within the luxury of a restaurant, Jiho Im can suavely guide the army of chefs under his tutelage to prepare the multi-course meals for his well-groomed multi-racial guests.

However, his core beliefs and quest for solace drives him to remote Korean villages to prepare incredible culinary delights (made-up of every overlooked root, herbs, and mosses that supposedly possesses great nutritional values) for the elderly salt-of-the-earth type people.

Chef Jiho wanders around a lot. He carries the burden of a grandma, who lives by scuba-diving for marine algae. She later cajoles him to take some codiums for free. He picks herbs and prepares a meal for an old couple living in the mountain. “There are 6 billion people on earth. How many can cook and eat together?”, the rejoiced grandpa remarks, moved by the chef’s gesture.

Of course, Jiho Im is a man of ‘great hunger’, whose travels and encounters with locals is a way of channelling his feelings of longing. “People criticized me for not being able to stay in one place for long. No one knew I was searching for something. Only I knew”, Jiho ruminates early in the documentary. The chef’s search began when he discovered that the mother that raised him was only his adoptive mother. Jiho’s biological mother left his father, while she was pregnant and he was sent back to his father’s family when he was three years old. 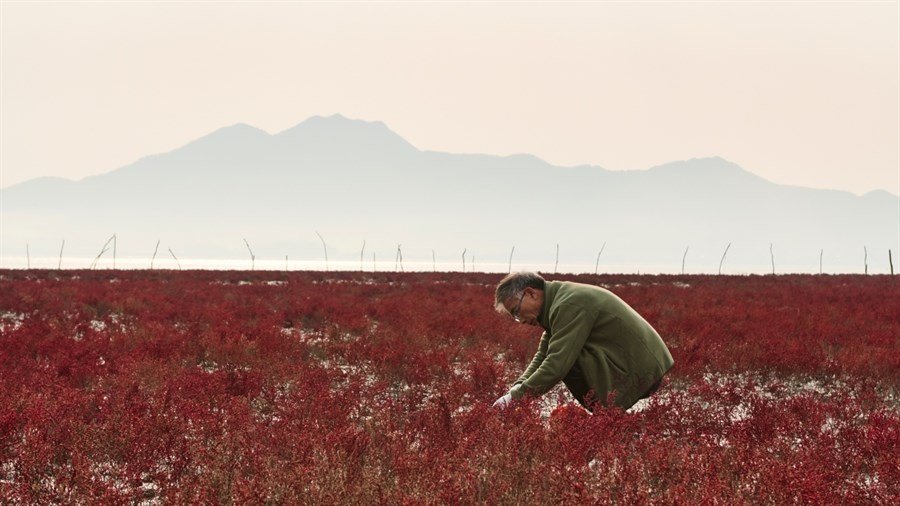 Though Jiho has been travelling around the Korean peninsula from the age of 12, doing odd jobs, he had learnt his biological mother’s fate only at the age of 16. By the time he was 22, Jiho’s adoptive mother also passed away. The loss propels him to feel that he hasn’t been very appreciative of the love she showered upon him. He confesses he has never cooked for his parents and even wonders, “could the longing be in my food?” as he soulfully interacts and cooks for these parental figures he meets on the road.

In his wanderings, the 50-year-old Jiho Im found his third mother, an 88-year-old Soon-Gyu Kim, whom he meets one day while she is picking up herbs from the fertile land, situated near her house in the mountains (an atmosphere that instantly reminded me of the remarkable Korean drama, The Way Home).

Similar to The Wandering Chef — Honeyland [2019]: ‘Sundance’ Review – An Exceptional and Unembellished Tale of a Woman’s Connection with Nature

The old woman lives with her quiet, fit husband and treats Jiho to a bowl of warm soup. In turn, the chef decides to cook them dinner by digging up for ingredients in the nearby land. The old couple and the guests they invite are sceptical about the things he includes in the dishes (“That’s stones’ clothes”, the old woman exclaims when Jiho plucks the moss clinging to the stones). But they all deeply enjoy the cuisines the chef conjures.

Jiho continues to juggle between his work and journeys, but he also takes time to visit this newfound ma in the mountain and builds a great rapport. The documentary ends on a bittersweet note with Chef Jiho Im paying tribute to his mothers by single-handedly cooking an enormous range of dishes (108, to be exact) within 24 hours.

Every frame captured by director Hye-Ryeong Park pulses with life’s simple pleasures. By skillfully relegating the crew’s presence to the background, Park makes this priceless glimpse into human decency and shared the experience of life perfectly work. The documentary may have been filmed for years, but Park pitches this particular phase of Jiho Im’s life in a manner that it remains unattached to time. What matters is how the ephemeral joys (of wandering and hospitality) heal the documentary’s primary subject.

The past memories and lifelong search of Jiho naturally bring forth a narrative arc, in which his meeting with the maternal figure (Soon-Gyu Kim) plays a vital role. And it’s very moving to see how he strives for the cathartic, healing experience through the food he cooks and shares. The bustle of modernity keeps us from enjoying the quiet pleasures of life and has turned cooking or eating a monotonous chore. Chef Jiho, the selfless people he meets, and the meals they share illustrates us the profound connection between food and one’s inner well-being.

Director Park could have easily manipulated the material for a more dramatic impact. But mostly the camera stays an observer; the silent shots of Chef Jiho while preparing the meals, often drenched in sunlight, fills-in the emotions flowing within him. The challenging number of dishes he cooks (in the kitchen on his third mother) towards the end is gracefully filmed, juxtaposed with intimate shots of rapid food preparation and long shots, full of pensive sadness.

Coming from a different cultural and social background, the dishes Chef Jiho Im crafts may seem strange and bewildering, even though the poignant humanity captured here renders the film universal. Overall, The Wandering Chef (85 minutes) is a fine culinary documentary that subtly morphs into a heartwarming tale of empathy and serene meditation on maternal affection.