'Little Forest' lacks conflict and tension and in exchange offers the chance to witness the simple, pure pleasures of altruistic friendships and closer-to-nature life..

Food and cooking aren’t considered as a form of art, in relation to the aesthetic and emotional experience it imparts upon viewers. That’s because of the common notion that physical taste experienced by an on-screen character couldn’t lead towards aesthetic admiration. The glowing appearance of a dish and the eating of food or drinking of wine could be argued as a mere functioning image and since audiences are far removed from partaking in the actual experience, they are naturally concealed from feeling the diner’s reaction. But time and again, some mellow cinema would challenge such perception, pushing us to comprehend how the on-screen showcase of culinary art and the art of consumption bears a profound connection to a characters’ arousal of desire or hope, and the eventual soothing of emotional unrest; as if remarking that ‘when the taste-buds get enriched, so does the soul’. ‘Tampopo’ (1985), ‘Babette’s Feast’ (1987), ‘Big Night’ (1996), ‘Eat Drink Man Woman’ (1994) are just some of the wonderful food movies, where the delectable cuisine plays an important role in the characters’ changing emotional dynamics. Yim Soon-rye’s simple yet brilliant drama Little Forest (2018) is the latest addition to the list as the culinary art and tranquil country-side setting offers the due space for personal healing.

Little Forest is an adaptation of Daisuke Igarashi’s popular manga series of the same name. It has already been adapted in Japan by director Junichi Mori as a two-part movie. The tale is now relocated to Korea and having not seen the Japanese films or read the manga, I don’t know how good an adaption it is. However, I immensely liked the film’s gentle tone and the trio of charming characters. Igarashi’s manga could be adapted in any language because rootless youths and urban malaise is a universal phenomenon. Kim Tae-ri of ‘The Handmaiden’ fame plays the central character Song Hae-won, a deeply vulnerable as well as a vivacious and extremely resilient girl. In the middle of the winter, she leaves her life in the big city and returns to hometown. Hae-won just wants to be alone for a while,  to access the string of humiliating failures and disappointments in her life. She has lost her father at an early age and her beloved mother has deliberately disappeared from her life (before Hae-won’s departure to college in Seoul). 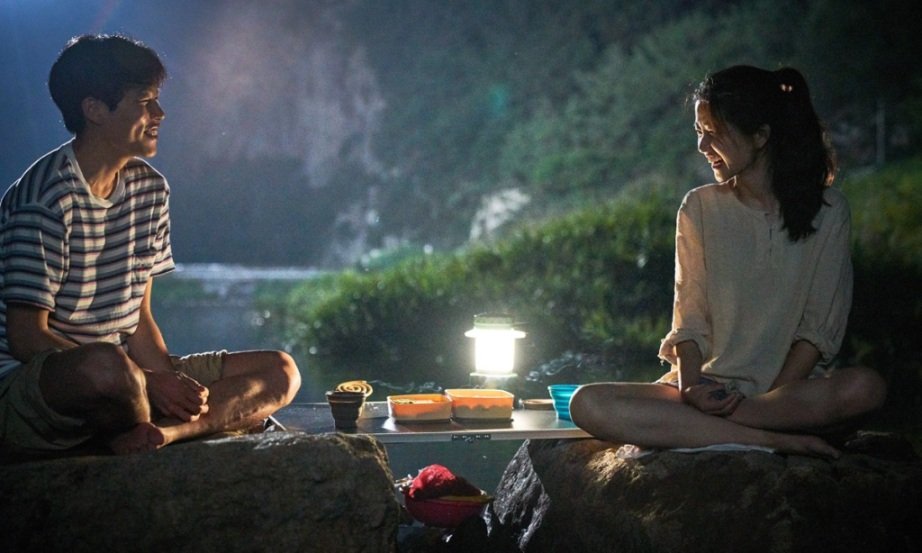 Hae-won has failed at her teaching course exam, which her boyfriend has passed. But when asked why she retreated back to rural life, Hae-won simply says that she was ‘so hungry’, indicating the stale pre-packaged foods from her dingy urban life. Back at home, she prepares wide variety of gourmet meals – from dough soup, rice cakes, cabbage pasta to traditional alcoholic beverage (makgeolli) – and recedes to her farming roots. The satiation of physical hunger naturally leads to spiritual well-being, freeing Hae-won from the cycle of self-repression and incessant stimulus of the urban environment. Each cuisine Hae-won prepares makes her contemplate the deep relationship she had with her kind, level-headed mother (Moon So-ri), who actually passed down the joy of cooking to the daughter. Hae-won’s recollection of past home-life is mixed with feelings of yearning and mild resentment (due to the mother’s abrupt disappearance). Nevertheless, Hae-won’s hibernation at hometown is enriched by the presence of her two childhood friends: Eun-sook (Jin Ki-joo) and Jae-ha (Ryu Jun-yeol). A sort of love-triangle between them is hinted earlier in the narrative.  But Little Forest largely focuses on the self-sustainable life-style of Hae-won through a single year (from winter to winter; and a feel-good epilogue set in the spring) with the seasonal changes superbly mirroring the young girl’s gradual emotional changes. It lacks conflict and tension and in exchange offers the chance to witness the simple, pure pleasures of closer-to-nature life and altruistic friendships.

In keeping up with the manga & anime’s tradition of writing three-dimensional female leads, the protagonist here is a fully-rendered, complex heroine who processes her buried pain of adult life by immersing herself in the interesting  combination of farming, cooking and selfless human connection. Hae-won’s psychological issues and friendship with Jae-ha could have been easily manipulated to draw in tawdry sentimentality, just for the sake of it. But director Yim elegantly focuses on the loving environment to emphasis upon the transience of life’s small disappointments and failures. Yim perfectly evokes a strong sense of place, making us to subliminally feel the changes underwent by characters, in relation to the setting. The cooking scenes are excellently rendered, which offers much more than an attractive aesthetic sense, since it instills the idea of cooking and consuming as a means of emotional catharsis.

Little Forest may not go very deep and recognize the perception of underlying artificiality in man’s communion with nature (as agrarian work in itself is way of reshaping environment for humans’ benefit) or exhibit the mean-spirited human-side of country-life. But Yim gracefully ties the personal (or psychological) with the ecological, finding sanctity in this simple connection. The top-notch performances elevate the unique Korean flavor, causing us to forget the tale’s manga roots. Kim Tae-ri is tremendously charming as Hae-won, emanating emotional honesty from deep within. Most importantly, the performance doesn’t bear the cutesy or sassy marks of typical Korean female leads. The supporting turns are equally impressive, particularly the emphatic presence of veteran actress Moon So-ri (‘Peppermint Candy’, ‘Oasis’, etc) assuming the mother role. She only appears in flashbacks and shares very few scenes with Kim Tae-ri, yet their strong bond radiates a beautiful aura throughout the narrative.

Little Forest (103 minutes) is a simple, life-affirming drama that’s wholly free from the generic, melodramatic trappings. The much-idealized notion of reconnecting with nature (and escaping urban rot) is effectively mulled over the tableau of relatable and charming characters. Altogether, an uncynical and relaxing cinema for the world-weary populace.