Auteur Angela Schanelec has re-written the grammar of film-making and created a cinematic language of her own over the course of eight feature films she has done. And her latest perplexing and opaque family drama “I Was at Home, But” [Ich war zuhause, aber], that opened at the 2019 Berlin International Film Festival and competing for Golden Bear, is a testament that she is a worthy successor to the several European avant-garde filmmakers, such as Chantal Akerman, Germaine Dulac, Robert Bresson and Michelangelo Antonioni. Long laconic takes with striking visuals and non-existent of the formal plot have become part of Schanelec’s filming grammar.

Schanelec, often referred to as Berliner Schule auteur, discards the traditional narrative structure and typical character sketch, and merely use them as a secondary tool to makes us observe and experience at the moment which is ever changing. To put that in perspective, the protagonist Astrid unexpectedly shows up in the staff room to explain his son is in the state of becoming and being a man at the same time.

“I Was at Home, But” is a sombre mood piece puzzle that calls for complete submission into its spiritual arc that often communicates through the cold but moving poetic visuals and strong subtext probing deep into the psychology of the characters. 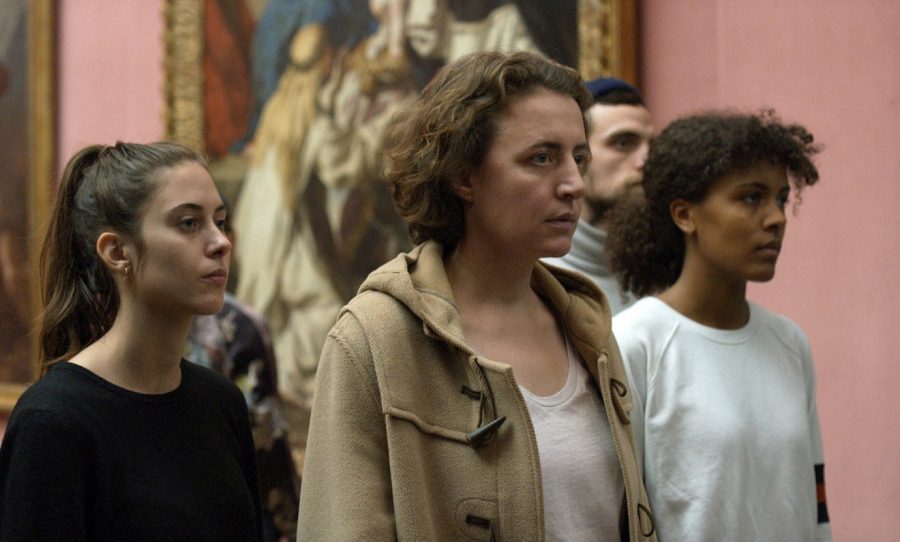 It would lead to a major disappointment if you try to piece together the psychological and emotional context of the characters rationally. The sequences are disconnected with most of the action happening offscreen. Editing is non-linear. And as the film progresses, we are hit with bewildering and enigmatic revelations that give a disorienting experience.

Angela Schanelec drops us into the middle of a crisis with no prior warning. After having disappeared for a week in the lush forest, a13-year-old boy, Phillip, returns home one day without saying a word. The film opens with a strange and detached to narrative prologue – a wild dog fiercely chasing a rabbit, a grizzly feeding on a dead animal inside an abandoned cottage while a donkey is looking out of the window. Schanelec’s camera leisurely captures the ongoing sadism of the animals raising doubt if we are watching a different film until the action shifts to Phillip returning home (after a week as per the synopsis) to his neurotic mother, Astrid and a younger sister, Flo. It would be hard to resist a long debate over the prologue that, somehow, metaphorically fits in the narrative or draw the absurd analogy of animals and humans reacting to a crisis.

Astrid and teachers believe that Phillips’s disappearance is related to his father’s recent death which is never explicitly stated or established through any visual cue. However, Astrid’s occasional explosion into a rage and subdued feeling inside the home indicate the family is still grieving. Perhaps, the grieve coupled with Astrid dating Flo’s tennis tutor may have pushed Phillips to the edge. The family goes through a break down that rubs Astrid a wrong way, but only to piece together everything and form itself anew.

In one of the most striking scenes, and also the first scene revealing Astrid’s vulnerability and rage, she bumps into a filmmaker (acclaimed Serbian director Dane Komljen) outside the supermarket and engages in a scathing critique from the film about a fallacy of acting where actors enact the emotion that they have never felt. She reluctantly argues about an actor playing terminally ill patient is a dishonest gesture and offence to the art. But the subtext strongly hints that outrage is more related to bereavement than the act critique of the film. This is all intertwined with sequences showing Phillip’s class performing Shakespeare’s Hamlet.

Ivan Marković shots stay static and move at an unhurried pace to capture the truth of the moment and the change happening around it. The camera never stays close to the character, rather it discreetly observes the unfolding mundane events in their lives. Schanelec neither gives any expositions or explanation for the disjointed narrative nor tries to bind the unrelated sequence, in the end, to make sense out of it. She let us engage in the film on a spiritual front, and those not committing to engage in the discussion after the end credit has rolled, this film is not for you.

‘I was at Home, But’ HAD IT’S WORLD PREMIERE AT THE 2019 “Berlin International Film Festival” in competition.