Home»Reviews»Film Festivals»Matter Out of Place [2022]: ‘Locarno’ Review – We Have A Serious Garbage Problem!
Film Festivals/Locarno/Reviews

Matter Out of Place, or its acronym MOOP refers to things or stuff that doesn’t belong to the immediate environment. Waste and debris like plastic, glass, metal, etc are largely defined as MOOP. The deeply perceptive Austrian documentarian Nikolaus Geyrhalter follows such matter out of place and looks at the people and mechanics involved in the process of cleaning up. From Austria, Switzerland to Nepal, and the USA, Geyrhalter’s Matter Out of Place (2022) silently observes the Sisyphean task of disposing of man-made garbage. Desert, mountains, verdant remote areas, and deep in the sea – our planet is being choked by the garbage we leave, and maybe centuries after our kind has perished the only lasting evidence of our existence could be the litter.

Similar to the works of Godfrey Reggion (Qatsi Trilogy), Ron Fricke (Baraka), and Edward Burtynsky (Manufactured Landscapes), Nikolaus Geyrhalter’s works offer a panoramic and wordless depiction of modern human lives’ devastating impact on the environment. He is widely known for his documentaries, Our Daily Bread (2005) and Homo sapiens (2016). The former delves into the world of mass food production and high-tech farming which is eye-opening as well as difficult to watch. The latter focuses on the spellbinding array of man-made abandoned places. From the empty shell of a failed industry to ship graveyards, and ghostly malls, Geyrhalter’s visually rigorous gaze on Homo sapiens almost makes it like post-apocalyptic documentation of Earth. 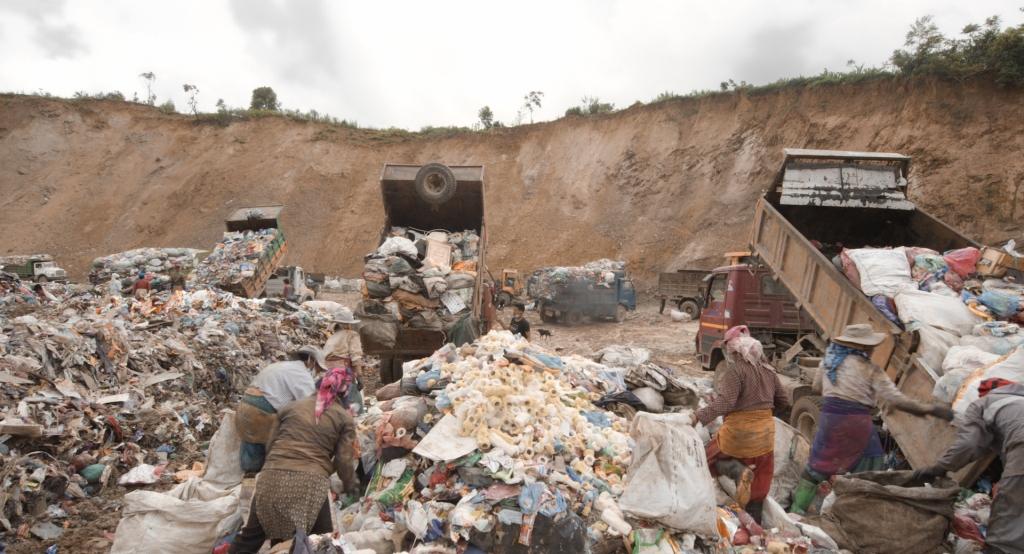 Prior to Matter Out of Place, Geyrhalter made Earth (2019), which chronicles how humanity is irredeemably changing the natural landscape. The repetitive yet unsettling structure of the documentary looks at the greater impact of large-scale mining and construction projects. With Matter Out of Place, Geyrhalter once again employs his breathtakingly precise formal rigor to look at humans’ unsustainable, toxic relationship with the natural environment. In fact, each of the episodes is much more than formal experimentation. When you surrender yourself to these awe-inspiring as well as haunting images, you’d gain a deeply emotional and thought-provoking movie experience.

The documentary opens in Solothurn, a town in Switzerland. An excavator burrows its way into a small parcel of land in a vast, empty meadow. We soon learn that the sole excavator is not involved in any construction project. But it’s simply unearthing the contents of a landfill. The meadow was a landfill site in the 1970s, till the waste incinerator plant was built. However, under a few feet of soil, piles of garbage remain firmly deposited. In the excavated garbage dump, there are lots of metals, glasses, and even a newspaper ad for Nestle. “You can easily read contemporary history with these [landfill] materials,” observes a man.

The next episode moves to a remote beach in Albania, where enthusiastic volunteers are gathered for a clean-up initiative. They pick up plastic waste in black bags and load it up in a small truck. When the truck fades away from the frame, in the next shot we see the omnipresent plastic waste in the landscape. The hope and enthusiasm the private initiative creates almost dissipates while looking at the desolate landscape. Nevertheless, all such little tasks and awareness drives are necessary to at least identify our garbage problem.

Matter Out of Place next travels to Nepal. It opens in the cramped alleys of a residential area, A man with a tricycle collects the garbage from each home. The waste keeps accumulating until all the small plastic bags are moved to a garbage truck. Then the truck navigates its way to the enormous landfill through tough, muddy terrain. In the landfill, hundreds of people move around picking up and disposing of the waste. These poor workers just wear a mask and gloves to sort out the waste that has traveled miles. A tangible sociopolitical commentary is felt in that static 6-minute shot. Moreover, this particular episode establishes one of the recurring imagery in the documentary: the massive human and machine power involved in the process of waste removal.

The next stop in Matter Out of Place is a paradise-like ski resort in Bettmeralp, Switzerland. Tourists keep pouring out of the rope winches since the village itself is located on a sunny high plateau. Like in Nepal, here too, after a laborious process the waste is accumulated from the different regions of the pristine mountain village and transferred to a garbage truck. Then comes one of the most beautiful and astonishing images in the documentary: the garbage truck is locked to the cable-way and travels down. From the ski resort, the documentary moves to beach resorts in the Maldives. Once again man and machine work their way through the shores of garbage.

Geyrhalter starts with the history of garbage, then zeroes in on the sociopolitical dimensions behind waste disposal. The ugly face of luxury tourism is obviously the most unsettling aspect. A couple of the documentary’s later episodes are set in a waste sorting plant and an incineration plant. Both are situated inside Austria. The episodes emphasize on the slow and strenuous process of waste management. In one moment, we see a garbage truck discarding the waste inside an abyss.

Later, a giant wheeled machine crunches the waste before sending it up for incineration. It feels as if we are caught inside a monstrous creature that’s gradually digesting its food. Alongside the imagery of a garbage truck in Nepal stumbling its way through hilly terrain, the Austrian plants for waste management make us wonder how much energy is expended on such efficient methods. How much CO2 footprint do these state-of-the-art technologies leave? Of course, the utter lack of recycling processes hints at an even more rapid death to the environment.  We throw our waste into differently colored garbage containers and think that we have done our part. But the logistics involved in removing and recycling it is perplexing. 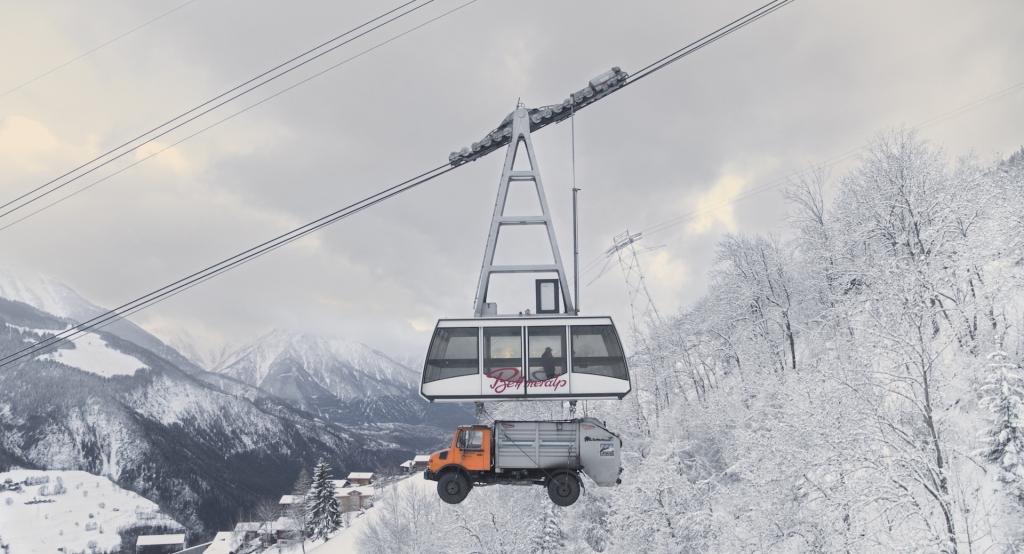 Another episode involving divers in Greece pushes me to cling to the word ‘Sisyphean’. The ocean, as we know, is where our garbage eventually settles down, gradually killing the seabed and strangling the sea organisms. A group of divers get to the bottom of the sea and pluck out the wastes. Though the situation itself looks hopeless, the fact that people are striving to improve the condition stops us from giving into despair. The scope of our actions might be limited, but it’s important to do something.

The word MOOP or mopping is said to have originated from the annual ‘Burning Man’ festival that’s held in the forbidding desert landscape of Nevada. Since 1990, every year people work for weeks to create the Black Rock City in the open desert. More than 50,000 people gather for the festival. Bikes are the only means of transport and there are no mobile phone towers. A giant sculpture of a man is burned in a ritual manner, at the end of the festival. The goal of the festival is to limit our material needs, express ourselves through art installations, be nice to each other, and most importantly leave no trace whatsoever. Hence, the organizers work in phases to clean up the desert and astoundingly they seem to achieve that goal.

Geyrhalter’s Matter Out of Place interestingly ends in the Nevada desert. The episode involving the Burning Man Festival also gives the documentary its most otherworldly and surrealistic images. The idealism of the festival might have its own flaws. But the astounding labor that goes into realizing the ethos of anti-consumerism sounds fascinating.

Overall, Matter Out of Place (105 minutes) is a transfixing as well as a disturbing documentary on our trash problem. We are living in the dawn of Anthropocene and Nikolaus Geyrhalter’s wide-ranging views of the garbage-filled landscape add to the many resounding alarm bells for humanity.

Matter Out of Place Trailer

10 Great Movies Set On A Train