Clinical, unforgiving and ironic to a fault , Paths of Glory melts the best of Kubrick's qualities into one nightmarish grim vision of French Army's authoritative regime during the heights of World War I. The acts are sharply pieced together, the tone remains coldly formal and the end result is simply spirit-breaking.

It is the intellect that Stanley Kubrick stimulates the most. With a knack of befuddling minds with horrors like The Shining and dramas like A Clockwork Orange, it’s slightly strange to see such an on-the-nose, anti-war piece of film-making that hits directly at the hearts. His vision for Paths of Glory is acutely wise, whispering the only truth there is to the countless wars, which is the relentless thirst for power.

An often neglected work in Kubrick’s much-praised filmography, Paths of Glory captures the consequences of rationality in between the times of a chaotic war. Kubrick turns his razor sharp blade to the front battle rows which are tasked to capture a virtually impossible hill, leading to the possible death of an entire regiment, and peels open the scars that speak of fear and instinct of survival against all odds. The higher echelon of French military management ranks of moral corruption and lust for absolute power. The only solace for the hapless battalion comes in the form of their Colonel, Dax, who goes to extravagant lengths just to ensure that justice is preserved at all costs.

Shot in sharp B&W tones, the blood looks thick black, the trenches feel like gateways to hell and the barbed wire gives a sensory image of purely unforgiving steel thorns. The explosions feel as real as the pain in the eyes of Colonel Dax when faced with the dearth of justice in the entire system. Thematically sound story-line gets further elevation from the rich conversations that are the heart and soul of Paths of Glory. At one point, two soldiers discuss regarding the ways they prefer to die on the battlefield. The conversation is followed by stunning existential remarks in which the fear of getting hurt and feeling pain gets marked higher than the fear of being dead by one of the serving personnel. 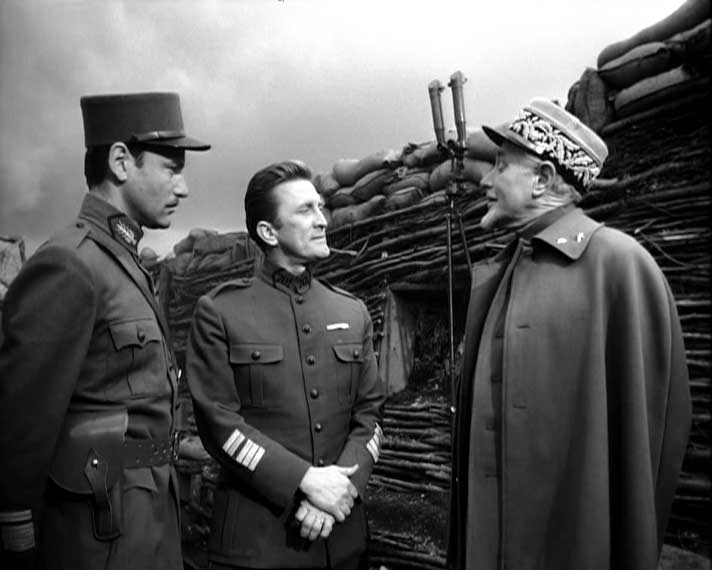 At the back of the curtain, one can imagine a cynical Kubrick sneering at us for convincing ourselves, even for a second, that there is a light at the end of this tunnel. Kubrick guides our hands into stranger darkness and leaves us there, sobbing over the lack of empathy of one man towards another. In a blinding stroke of wisdom, Kubrick further draws the parallel between a man’s ambition weighed against the misfortune of many. With so many themes stacking themselves rather squarely in the balance of the narrative, one might wonder what all cards Stanley Kubrick can pack up his sleeves.

Clinical, unforgiving and ironic to a fault, Paths of Glory melts the best of Kubrick’s qualities into one nightmarish grim vision of French Army’s authoritative regime during the heights of World War I. The acts are sharply pieced together, the tone remains coldly formal and the end result is simply spirit-breaking.