We’re a world of billion people yet there are very few we connect with and even fewer who understand us. It’s natural when you find that person, you want to spend every waking moment of your time with them. But sometimes things are complicated, especially when you’re a teenager falling in love with an adult. Paul Thomas Anderson with Licorice Pizza explores that relationship with the story of Alana Kane (Alana Haim) and Gary Valentine (Cooper Hoffman) growing up, running around, and going through the treacherous navigation of first love.

It’s a bright sunny day in San Fernando Valley, 1973. 15-year-old Gary Valentine prepares for his high school picture day and at the first sight, he falls in love with 25-year-old Alana Kim. They go out for dinner, more of a dare on Alana’s part, and soon a friendship blossoms between them. Gary brags about him being a child actor as Alana chaperones him to New York for a performance. As the story accelerates, we see Gary and Alana trying to search for their calling in the surroundings they have been brought up in. While trying to keep their relationship platonic.

Also, Read: 10 Films to Watch if you like The Power of the Dog on Netflix

Gary is someone who searches for the next big thing that is going to excite him. He loves to hustle more than money. He loves the thrill of it and most importantly he loves that Alana is with him as his business partner. He is an ambitious teenager, trying to be an adult and making it on his own. Alana on the other hand was stuck in a job where she had to deal with her creepy boss Her experiences with men had mostly been bad and full of themselves. Until she meets Gary. With him, she feels safe and herself. Also to the fact that she is the one who can define the relationship and set limits. She is trying to find herself and a sense of security. But at the same time, she also knows that Gary is still a teenager and she is in her 20’s and one day she has to grow up and get a handle on her life. 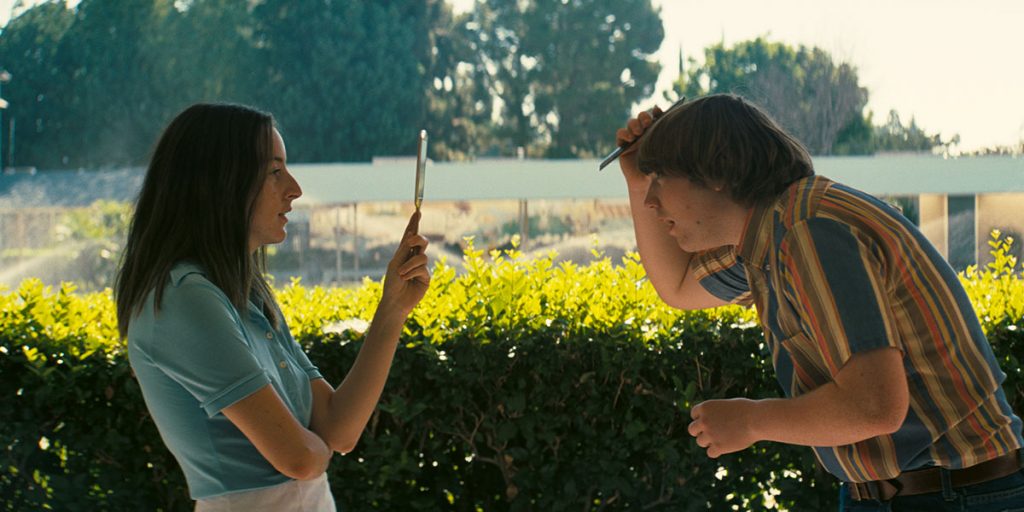 Anderson doesn’t try to oversimplify anything. He trusts his audience to make that judgment for him. He is showing life in momentous events where you are desperately trying to define yourself with a job or whatever it is you want to do. He is embracing the denominator of being aimless in a coming of age story. There is so much to love in this movie. From the humour that makes you laugh till your tummy hurts to the exciting soundtrack that flashes through the dreamy frames that make you fall in love with the movie. There is a Shabbat dinner sequence in the movie where Alana’s date Lance (Skyler Gisondo) reveals that he is an atheist to her family and what follows is a hilarious sequence where Alana just spirals out and shouts at everyone. There is a greatness in Anderson’s storytelling where he finds the right balance of comedy, drama, and emotion in a scene.

Coming to the performances, Haim is a star in making. She is just phenomenal in her character. The way she has that control in every scene and especially her comic timing is just brilliant to witness. You can’t help but fall in love with her and the character too. You sort of find yourself in her, because being in your 20’s is all about trying to get your life together while struggling to define your identity. In arms with Haim is Hoffman, who is a replica of his great father Philip Seymour Hoffman. From his mannerism to his smile, you can’t help but see his father in him. He plays Gary with a charm and a freeness that you can only find in someone comfortable in who they are. It is his chemistry with Haim that makes the movie worth every penny. Every scene with them is a sight to witness. One scene you truly love is when their characters are running towards each other and together. It is a beautiful and heartfelt moment to keep in your memory.

Licorice Pizza is Anderson’s love letter to coming of age cinema. It is a story that everyone can find themselves in. It is about first love, the importance of friendship, the emerging jealousy, and the everyday hustle we go through in life. Anderson also sprinkles a few moments of the ’70s, especially the gas crisis of 1973. With phenomenal and breathtaking performances from Haim and Hoffman along with some humorous guest appearances and a crazy and energetic Bradley Cooper. Licorice Pizza is one of the best movies 2021 has to offer.