Chop and Steele (2022) Movie Review: Remember the two-second adverts of absurd tricks for talent shows to garner a few extra laughs? Turns out these funnymen are not on the stage by themselves, but are actually called upon by the talent show themselves. Atleast that is the case for funnymen Chop and Steele, who would come and teach you impromptu tricks with stuff around your house. When they are called for America’s Got Talent, they end up using a sledgehammer to demonstrate an exercise and also pee on the stage to massive boos.

This fine line that crosses the threshold of public pranks forms a foothold in this fine documentary by Berndt Made and Ben Steinbauer that takes the audience into the wacky minds of the comedic duo Nick Prueher and Joe Pickett. Chop and Steele plunges into the lives of these Wisconsin natives who are also UW-Eau graduates. Neither of them are interested in day jobs. A sequence follows their parents recalling how they were always into pranks. Together they created and started the Found Footage Festival in 2004, that presents a compilation of hilarious clips from old VHS tapes from thrift stores.

Chop and Steele runs along their subjects’ lives with an air of uncomplicated focus, cruising along their childhood adventures through old video tapes and cutting back to the present with insights from David Cross, Bobcat Goldwaith, and Reggie Watts. The focus then cuts to the lawsuit that was labelled against them, where both the men were sued by WEAU 13’s parent company, Gray Television, one of the largest media companies in the US, for their act on the WEAU Morning Show. They had performed an act as the strongman duo, Chop & Steele, and showed off their ridiculous (and harmless) workout routines like breaking easter baskets by stomping on them, throwing small sticks at the others back to break it, and even lifting full jugs of gravy. 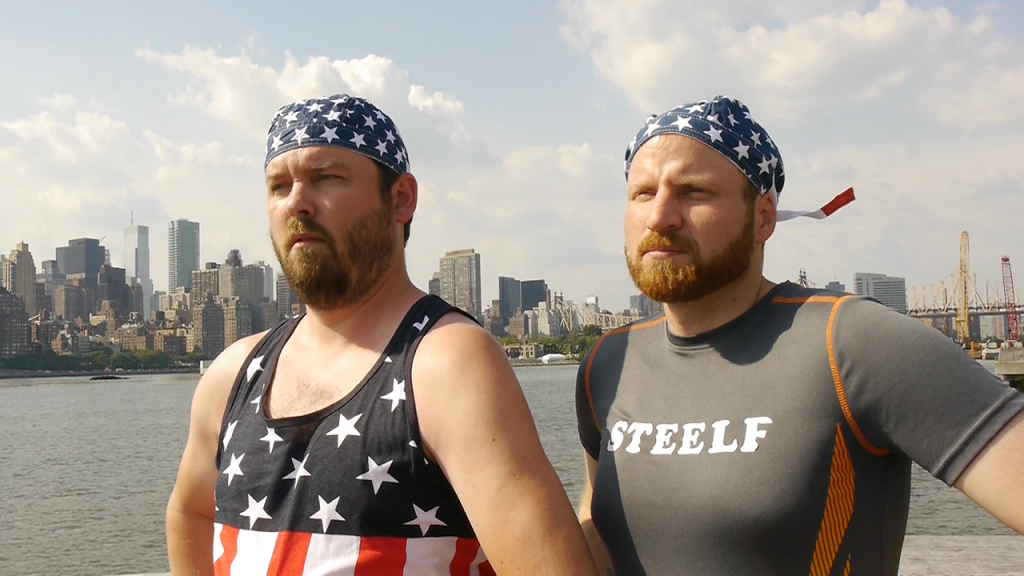 The effects of the lawsuit then form the majority of the focus of Chop and Steele, as they slowly yet undecidedly come to terms with the consequences of such a heavyweight accusation at what they do for a living. Their act was harmless and even though there were settlement claims, both Prueher and Pickett did not come to terms with them. The show producers did not realize that they were really just pranksters and playing fictional characters. Inevitably, such a lawsuit brought these characters an unprecedented amount of exposure and attention. Chop and Steele steely shows how the other side of this defamation brought to them also threw a unwarranted spotlight on a culture that is built on the boundaries that define shame and appraisal. For these men, these terms and conditions are ambivalent. One look into the Found Footage Fest YouTube clip, will tell how their segments on three different morning shows are described as a “trio of the most profoundly stupid TV appearances ever to hit local news.”

Also read – My Name is Andrea [2022]: ‘Tribeca’ Review- An Eye-Opening Take on How Swiftly Castles of Glass can Shatter

As they are called for an act on America’s Got Talent, directors Made and Steinbauer take us backstage through the stressful day of preparation as the men rethink about their decision to even make an appearance on a show that goes tangentially with their ideals. Still they do it, and it turns out that the final episode only contains two seconds of their appearance. Does it do anything for Chop and Steele? No. But does it reinforce their point? Yes.

Even when the tough times hit during the pandemic, Chop and Steele runs along the broken endeavors of these men as they have to part ways for a living. It’s their steely reserve to power through, even as their business strives hard to sustain in a pandemic. Chop and Steele is a counterpart study of these two characters as fascinating as their fictional spinoff. A few editing hiccups aside, it would have benefitted more with a deeper look into their own understanding of a culture they are trying to reflect through their creations. Nevertheless, directors Made and Steinbauer create an honest and endearing portrait that does not take itself too seriously (which works as a tremendous treat given its subjects) and in doing so, hilariously bares open a system built on feeding the fittest, but never enough.

CHOP AND STEELE PREMIERED AT THE 2022 TRIBECA FILM FESTIVAL