Morris Engel, Ruth Orkin, and Ray Ashley’s influential American indie movie Little Fugitive (1953) has a very thin story-line. The narrative centers around two brothers living in Brooklyn with their single, working mom (Winifred Cushing). Lennie (Richard Brewster), the older brother is 12 years old, who often hangs out with a couple of his pals and wants nothing to do with his annoying kid brother. Joey (Richie Andrusco), the freckle-faced seven-year-old boy, occupies himself with chalk drawings on the sidewalk, watches cowboy shows in TV (so obsessed with the cowboy culture that he dresses like one), and tries his best to fit in with brother Lennie’s gang. Upon overhearing Lennie and his friends’ planned excursion to Coney Island, Joey begs to be included in the group, but his pleas are snubbed outright.

Soon, the siblings’ mother is called away on a family emergency. She would be away for a day or two, and she puts Lennie in charge of Joey, quashing the boys’ plans to Coney Island outing. Irritated by the unprecedented development, Lennie concocts a malicious prank using an air gun and ketchup. He gangs up with the buddies to make Joey believe that he fatally shot and killed his own brother. The terrorized little boy runs and boards a train, and gets off at the final stop – Coney Island. There the ‘little fugitive’ has various little adventures, while his panic-stricken elder brother hopes for his brother’s return before mom’s arrival. 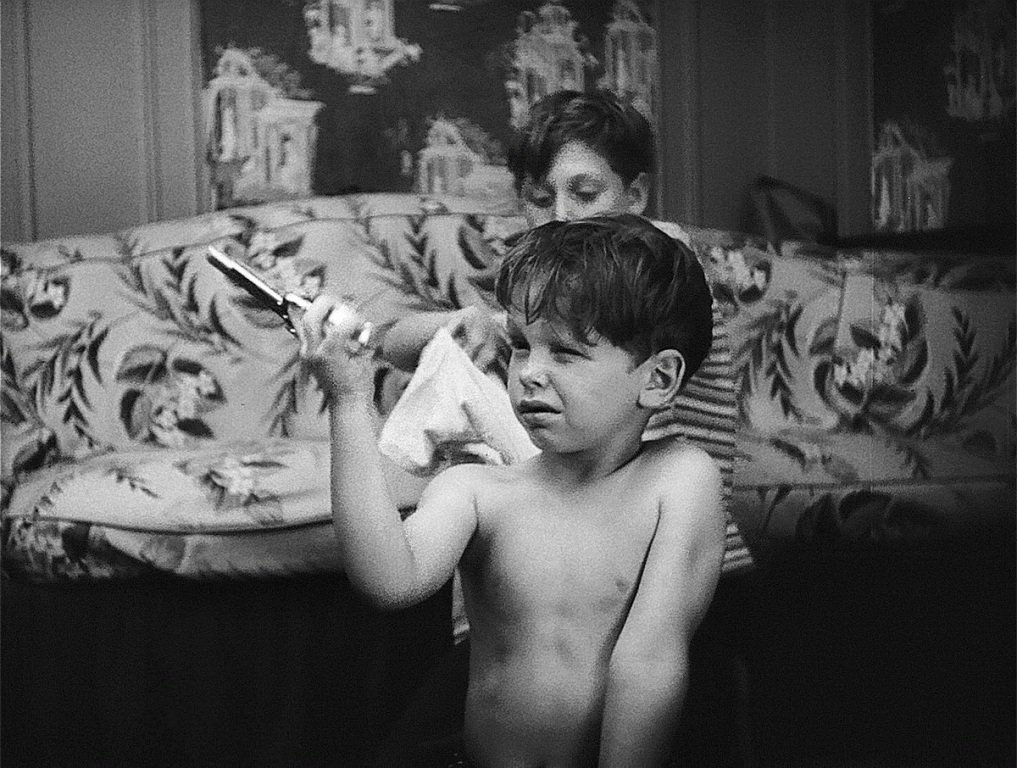 Little Fugitive was put together by the collaboration of Morris Engel, his wife Ruth Orkin, and Raymond Abrashkin (aka Ray Ashley), a children’s author. Furthermore, Engel shot the movie and Orkin co-edited it. Engel and Orkin have enrolled and met at New York’s Photo League, a revolutionary photography association of the time. Little Fugitive was made at a minuscule budget of $30,000 and shot on-location with hand-held 35mm cameras that couldn’t record sound (background noises and sparse dialogues were added in post-production). Although the film was turned down by major US distributors, it went on to score an Oscar nomination (for Best Writing) and won the  Silver Lion Award at Venice Film Festival. In 1997, it was selected for preservation Library of Congress, the world’s largest library.

Similar to Little Fugitive: I Wish [2011] — An Honest Tale of Two Siblings

The elegantly showcased sociological subtext, the hidden camera techniques that don’t overthrow the realism on the crowded streets of Brooklyn and on Coney Island, plus the candid performances of inexperienced child and adult actors (which remain as their only screen credit) may bear all the trademarks of Italian neo-realism. At the same time, Little Fugitive is diffused with stylized visual poetry and a playful harmonica, calliope musical score (composed by professional harmonica player Eddie Manson).

In fact, the kinetic mode of lyrical film-making and utter lack of didactic moralization made the illustrious French New Wave film-maker Francois Truffaut to proclaim (in an interview with The New Yorker): “Our New Wave would never have come into being, if it hadn’t been for the young American Morris Engel, who showed us the way to independent production with this fine movie.” Moreover, the exciting indie feature was often credited as the seed for the American independent film movement (later expanded and honored by the likes of Samuel Fuller, John Cassavetes, Charles Burnett, etc).

Even without considering the weight of its historical achievements, Little Fugitive works as a simple yet enormously endearing children’s drama. The narrative allows little space for thematic interpretation yet the imagery possesses an ineffable magical quality so as to overwhelm our senses. Morris Engel has mentioned that he didn’t try to elicit performances from the children, but rather tried to capture their natural instincts. It mostly shows in the narrative’s elaborate sequences where Joey blows his money on carousel rides, hot dogs, cotton candy, batting cages, and ball-toss games. The moment when Joey tries to touch the brass ring from the moving merry-go-round ride was absolutely delightful.

Even though the directors’ tone is largely playful, they repeatedly try to ground the story within the potent reality. For example, Joey, having run out of money, does the least sought-out work of collecting soda cans to turn them in to the recycling center for few cents (he uses the money to go on the pony ride over and over again). These scenes of Joey scouring the beach sand were striking for its simplicity, focusing on ordinary people going about their ways to have a good time (Engel used a innovative strap-on camera to move among the sunbathers unobserved).

Also, Read: Cinema and the Art of Life

Eventually, the film is so satisfying because it serves as a historical document of a time; a time capsule showcasing the common American populace of the 50s. Even for those of us who have never been to New York, Engel’s impressionistic vision of a grand thriving city takes us back to the time we ourselves viewed at similar bustling environment of a metropolitan (from Joey’s height) with a mixture of fear and awe. Engel is truly a magnificent photographer who instills a spontaneous beauty to each shot. The sunlight under the boardwalk during the daybreak, silhouettes of people late at night, the lapping of waves, the empty beach in the morning, residents picking their way through the puddles in the streets, it all remains as a testament to Engel’s great artistic instincts, capturing simple things in a urban landscape that’s consistently and drastically modified by the single-most vicious force: time. In fact, the alternatively intimidating and benevolent New York City itself serves as a huge character in the narrative.

With a running time of 80 minutes, Little Fugitive could be publicized as a classic, kid-friendly feature. But that wouldn’t explain this film’s spectacular visual style that impeccably transports us to a completely different place and time. Overall, it’s one of the must-see seminal works in the history of cinema.