A short and ultimately not very sweet (well, it’s relatively depressing) feature-length animation set against the Taliban jurisdiction in Afghanistan, The Swallows of Kabul (Les Hirondelles De Kaboul) is unfair, but almost entirely a hopeful reflection on pursuing truth in an atmosphere conjured by lies.

We begin the film with the horrific stoning of a promiscuous woman, in Kabul what she does with her body is not within her control – she is killed. It is the end of her story and the start of Mohsen’s, a history passionate individual who wants to teach the future generation of Afghanistan along with his art obsessed wife, Zunaira. Mohsen is overcome with an urge to take part in this gruesome act and an immediate wave of guilt rushes over him. He collapses to his knees. However, this is also not entirely his story – Atiq runs the prison the woman was taken from, he is depressed, war-stricken and cares for his dying wife. Everything in Kabul seems lost. For now. 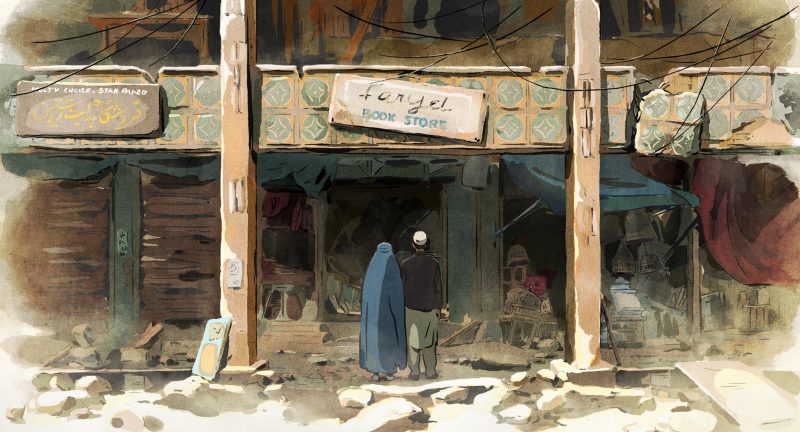 There was something special about the visual style here and it really carried a large portion of the storytelling, aside from some frames that could’ve been more expressive, the washed watercolour aesthetic of this world is incredibly fitting. You can sense the pain in Atiq’s bold, heavy eyes. The detail is simplistic but perfect. His narrative is probably the best in this 80-minute film, although, once Zunaira becomes the dogma of an idea for freedom, I wished that the filmmakers had chosen a better path to skew her away from her secure lifestyle with Mohsen. There is a moment which occurs, heartbreaking indeed, yet the execution could’ve carried a lot more in tone to the oppressing environment of Kabul and the men who actually perpetuate it. A tragic accident it is, but not emotionally gripping to what occurs beforehand.

This is a slightly problematic film, pacing and investment-wise, but it does pursue honesty and hates the fact that love is being dismantled by extremist regimes like Sharia Law. Also, it might just be worth seeing for one beautifully drawn transition from humans to swallows, and of course anyone interested in foreign language animation will find this (at the very least) intriguing.

The Swallows Of Kabul Rating: ★★★

Robert Pattinson Is Your New BATMAN