F.W. Murnau’s Nosferatu, A Symphony of Horrors (‘Nosferatu, eine Symphonie des Grauens’, 1922) was an unauthorized yet first adaptation of Bram Stoker 1897’s novel Dracula, the most influential literary source for the vampire legend. To evade copyright law, Nosferatu’s screenwriter Henrik Galeen changed the story from London to the fictional small-town of Wisborg, Germany, and also altered the characters’ names. But Bram Stoker’s estate filed suit, claiming the adaptation was an infringement. The German court ruling (in 1925) ordered all copies of the film to be destroyed. As a result producer Albin Grau (also the film’s costume designer and art director) who produced only Nosferatu under his company banner, Prana Film was forced to declare bankruptcy. The orders were followed meticulously although one print, thankfully, found its way to the United States.

In his 1997 review of Nosferatu, film critic Roger Ebert (which he included in his ‘Great Films’ list) writes, “Ironically, in the long run Murnau was the making of Stoker, because ‘Nosferatu’ inspired dozens of other Dracula films, none of them as artistic or unforgettable, although Werner Herzog’s 1979 version with Klaus Kinski comes closest.” Despite the stake driven through Murnau’s Nosferatu through the legal machinations, it has survived, its atmosphere and imagery haunting generation of cinephiles even among those who display distaste for the ‘horror’ genre. 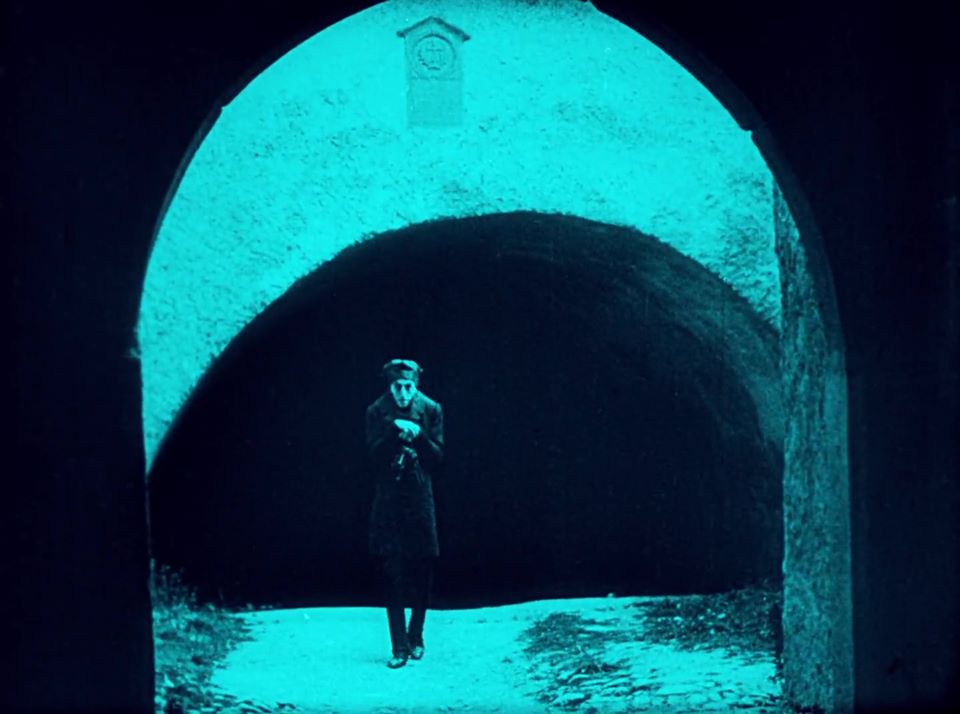 What instantly strikes us (or instills shivers) while watching Nosferatu was Max Schreck’s eerie performance as Count Orlok, his mechanical, stilted movements doesn’t provoke any unintended giggles (as it usually happens while watching a lot of silent horrors). Embellished with spider and rodent-like features, Count Orlok is the perfect embodiment of evil, unlike the strangely beguiling on-screen incarnations of Bela Lugosi and Christopher Lee. Although Max Schreck worked throughout the 1920s and in the 1930s until his death in 1936, the antiquated chills of his performance continued to menace viewers that in the 2000 movie Shadow of a Vampire, it was suggested that Schreck was a real-life vampire hired by Murnau for authenticity (Willem Dafoe perfectly embodied the character). Of course, in the hands of a lesser visionary or sensitive film-maker, Nosferatu wouldn’t have retained its alarming effectiveness. Murnau’s expressionist use of shadows and silhouettes still looks creepily awesome.

Similar to Nosferatu: The Cabinet of Dr. Caligari [1920] – A Ground-Breaking and Intensely Weird Silent Masterpiece

Murnau is one of the early film-makers to have emphasized on the inventive use of space within a shot. Born as Friedrich Wilhelm Plumpe in 1888, the son of textile manufacturer adopted the name Murnau to pay homage to artists’ colony (Murnau, a small town in Bavaria), whose members included the influential Russian painter Wassily Kandinsky. During World War I, he served in the infantry and later got transferred to the Luftwaffe, the German air force. Unlike the technocratic vision of Fritz Lang (who also released his first masterpiece Dr. Mabuse, the Gambler in 1922), Murnau was considered as a lyrical film-maker whose visual poetics reached greater depths in films like The Last Laugh (1924) and Sunrise: A Song of Two Humans (1927). Between 1919 and his unfortunate death in 1931 (from a car accident) Murnau directed twenty feature-films, one-third of which are entirely lost.

The fully restored digital version of Nosferatu fascinatingly opens with a title announcing, “Nosferatu. Does this word not sound like the death bird calling your name at midnight? Do not utter it, or the images of life into pale shadows and ghostly dreams will rise from your heart and feed on your blood.” Thus begins the sad tale of young Thomas Hutter (Gustav Von Wagenheim) and his wife, Ellen (Greta Schroder). Early when the young aspiring realtor is called by his boss, Knock (Alexander Granach) for a job, Hutter meets Professor Bulwer (John Gottowt) on the street (Van Helsing character in the novel). The professor fatalistically declares, “Not so hasty, young friend! No one can escape his destiny!” The estate agent wants Hutter to go to a wealthy client’s estate, situated in the isolated mountains of Transylvania, who has shown interest in buying a property in Wisborg.

Hutter cheerily heads off to seal the deal, like a naïve young man heading to battlefront despite fretful Ellen’s misgivings. After an arduous journey Hutter is close to his client, Count Orlok’s castle. But the very mention of the Count’s name incites great fear, and the locals warn him to stay away from the castle. During his stay at the local village, Hutter finds ‘The Book of Vampires’ where the aforementioned lore about Nosferatu is mentioned. Nevertheless, he unheedingly approaches Orlok’s castle (Murnau employed a photographic negative to give the forest and the castle a ghostly look). Then comes one of the many memorable shots in the film, in which the Count with a hunched slow menacing walk advances through an archway and introduces himself to Hutter.

While signing the papers, the Count accidentally comes across the picture of Ellen, and immediately sets his sight on her. Meanwhile, Ellen seems to have developed a strange psychic connection with the Count, as she stops him when he tries to drink blood from Hutter’s throat. Soon, the legendary Nosferatu decides to comfily sail across the sea in his coffin among a crew of unsuspecting sailors. The ghostly Count’s presence gradually turns it into a death ship, the sailors succumbing to madness and plague. Moreover, he brings plague and chaos to all the towns on his way. Interestingly, Orlok’s motivation doesn’t seem to be sexual, unlike the later on-screen interpretations of the novel. Nevertheless, the ultimatum is typical: that the vampire will only perish if the virtuous Ellen makes a courageous sacrifice. 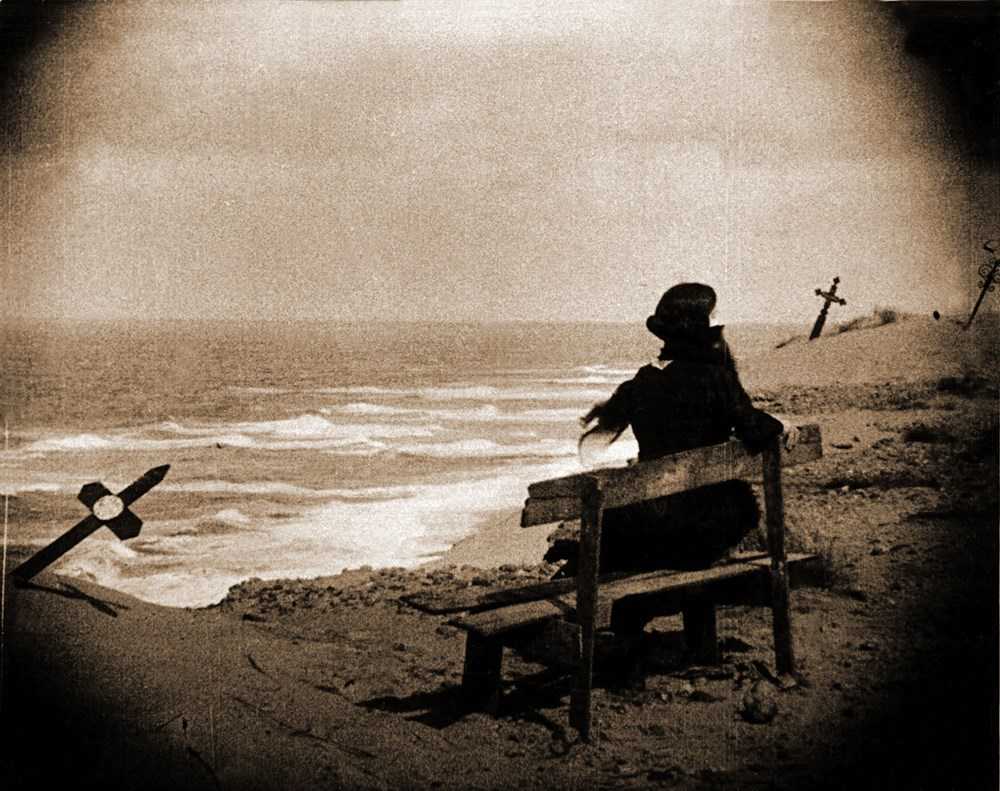 Critics often cite that Murnau’s experiences in the First World War (including the loss of his lover) have artistically found its way through Galeen’s adapted script. In the film, a title announces that, “An epidemic of plague has broken out…young people are dying in huge numbers”. It might just indicate the 1919 influenza pandemic, in which millions perished across the world. Or it could also indicate the war, where many naïve young Germans died in the trenches.  In one scene, grief-stricken Ellen waits for Hutter in seashore, near a sand-covered sailor cemetery, the wistful imagery bedecked with crosses reminds us of a deserted battlefield.

Murnau and writer Galeen show an interest for dichotomies in the narrative. The film opens with Ellen dwelling in placid, domesticated surroundings, adorned by kittens and flowers. Later, when Hutter takes a tiring trek, Murnau contrasts the earlier sequence with nature’s barbarity. The theme is also unsubtly contextualized in the scene Professor Bulwer explains his students about a carnivorous plant (likening it to a vampire) and a polyp with tentacles. Of course, there are other broader dichotomies Murnau addresses in the narrative such as science Vs mysticism, light Vs shadow, etc. But the delightful aspects of Murnau’s visual prolificacy can be witnessed when pure evil dominates; for instance, the Count’s journey onboard a ship where he kills them one by one.

Among the German Expressionist filmmakers, Murnau perfectly understood the art of using shadows in a frame. Nosferatu may not have the power to spook modern audiences. But it can be thoroughly admired for its artistry and visual suggestions. In Nosferatu, Murnau not only brilliantly intercuts between two scenes to create a dramatic impact, but also employs shot transitions within a scene (from a long shot to medium-long shot, particularly when Hutter spies at Orlok from his room) to skillfully spook us. A lot of these visual tricks may have become part and parcel of the trade, but the artfulness displayed here still possesses a haunting, disquieting quality.

Later day Hollywood films like Jaws (1975) & Alien (1979) were commended for building up on tension even though the central, dreadful creature is only shown at infrequent intervals. Murnau has pioneered in mastering this art of creating terror through mere suggestions as the titular character here is said to have appeared on screen for less than nine minutes. Overall, F.W. Murnau’s stylistic imagining of the legendary Dracula story in Nosferatu (88 minutes) continues to demonstrate the sheer artistry that goes into film-making.